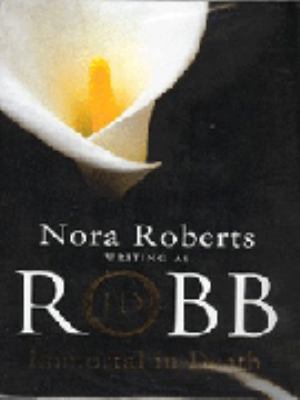 She'd come to New York to be a cop, because she believed in order. Needed it to survive. She had taken control, had made herself into the person some anonymous social worker had named Eve Dallas'.
But in a few weeks she won't just be Eve Dallas, lieutenant, homicide. She'll be Roarke's wife. But Eve's wedding plans may have to be put on hold as her private and professional lives collide...
The victim in her latest murder investigation is one of the most sought-after women in the world. A top model who would stop at nothing to get what she wanted - even another woman's man. And Eve's chief suspect is the other woman in this fatal love triangle - her best friend Mavis. Putting her job on the line to head the investigation, Eve discovers that the world of high fashion thrives on an all-consuming passion for youth and fame. One that leads from the runway to the dark underworld of New York City where drugs can fulfil any desire - for a price . . .

In the third novel of her acclaimed "Death" series, Robb (the pseudonym for Nora Roberts) once again sets her 21st-century police detective heroine on the trail of a murderer. Set against the background of the youth-obsessed, drug-using fashion industry, this suspenseful tale sweeps from the glitzy to the seamy with all the flair and panache one has come to expect from Robb. Although the romance is not so prominent here, the sexual tension still simmers. The author of over 100 romances (primarily as Nora Roberts), Robb has written futuristic romantic suspense stories that include Naked in Death (Berkley, 1995). She lives in Keedysville, Maryland. (c) Copyright 2010. Library Journals LLC, a wholly owned subsidiary of Media Source, Inc. No redistribution permitted.

The third, and arguably best, book in Robb's futuristic In Death series here receives its first unabridged audio treatment (the abridged version was offered in 2001 by Brilliance), and the result is a brisk listen that captures all the suspense of this murder mystery. Ericksen gives tough cop Eve Dallas a hard, no-nonsense tone and nails her fianc? Roarke's Irish lilt beautifully. She also deftly portrays Eve's softer side, which comes out when she's forced to arrest her friend Mavis for the murder of a supermodel named Pandora. Eve knows Mavis couldn't have killed Pandora, even though she stood in the way of Mavis and her boyfriend, fashion designer Leonardo. But the evidence-Mavis is found at the scene of the crime, sporting scratch marks from Pandora-seems unequivocal. In the course of Eve's investigation, listeners meet a number of intriguing characters, including a designer with a map tattooed onto his skull, a grumpy horticulturist and a slinky, lifelike drone (i.e., android). Although Ericksen's portrayal of some of these personas can be exaggerated, on the whole, she does an excellent job conveying the primary characters and matching the pace of this taut yarn. Based on the Berkley paperback. (Nov.) (c) Copyright PWxyz, LLC. All rights reserved
More book reviews at iDreamBooks.com