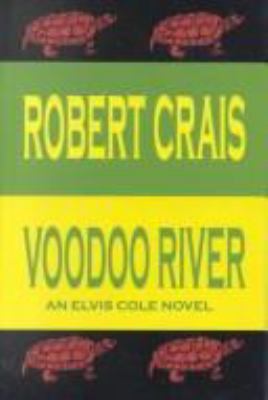 Genre/Form: Detective and mystery fiction.DDC classification: Summary: L.A. private eye Elvis Cole is hired by popular television star Jodie Taylor to delve into her past and identify the biological parents who gave her up for adoption thiry-six years before.. When Cole realizes that his employer knew more than she was telling, Voodoo River becomes a twisting tale of identity, secrets, and murder.
Tags from this library: No tags from this library for this title. Log in to add tags.
Fiction notes: Click to open in new window

L.A. private eye Elvis Cole is hired by popular television star Jodie Taylor to delve into her past and identify the biological parents who gave her up for adoption thiry-six years before.. When Cole realizes that his employer knew more than she was telling, Voodoo River becomes a twisting tale of identity, secrets, and murder.

On a trip to Louisiana in order to locate the biological parents of a popular television actress, private eye Elvis Cole runs into more than he bargained for, including a cast of memorable characters. From the author of Lullaby Town (Bantam, 1992). (c) Copyright 2010. Library Journals LLC, a wholly owned subsidiary of Media Source, Inc. No redistribution permitted.

``Efficiency and focus are the keys to success,'' says L.A. PI Elvis Cole in the fifth (after Free Fall) and best to date of this outstanding series. Although Cole's comment is a little facetious, it's an accurate commentary on his approach here. Popular 36-year-old TV star and adoptee Jodi Taylor hires Cole to identify her birth parents and uncover her medical background. His investigation takes him to Ville Platte, La., where he encounters a lovely attorney, an ancient snapping turtle and Jimmy Ray Rebenack, auto mechanic and part-time investigator who has already uncovered some facts about Jodi that he may turn to his own advantage. Cole's attention to Rebenack worries Milt Rossier, a local crime lord involved in assorted illegal activities, but Cole cares only about his own investigation until one of Rossier's thugs murders an old man for protecting a small child. Finally, Cole calls on Joe Pike, his silent and deadly partner, to help put a stop to Rossier's exploitive pursuits and expose the old crime that threatens Jodi Taylor's career. Cole has never been wittier, more passionate or more violently committed to his clients. Crais makes not a single misstep here. Author tour. (June) (c) Copyright PWxyz, LLC. All rights reserved

Los Angeles private eye Elvis Cole is hired by television star Jodi Taylor to find Taylor's birth parents. Soon after Cole arrives in Louisiana's bayou country to begin his inquiries, a local investigator is killed. With the help of his loose-cannon partner Joe Pike, Cole discovers that Jodi's natural father was a young black man who was killed by Jodi's maternal grandfather. The crime was buried for 30 years until the murdered investigator uncovered it and tried to blackmail Jodi about it. He was killed because his freelance activities threatened a lucrative illegal-alien smuggling operation. Cole and Pike decide to take down these purveyors of human misery . . . just because. Cole, in his fifth appearance, is in fine form. He's as tough, witty, and clever as ever, and his partner Pike exudes danger like no one in suspense fiction this side of Spenser's Hawk. The series has been nominated for Edgars and has won Anthonys. This installment is every bit as good as its predecessors. --Wes Lukowsky

Missing-persons specialist Elvis Cole (Free Fall, 1993, etc.) thinks his fifth case is right up his alley: locate the blood family of white-hot TV actress Jodi Taylor, adoptive and concerned about her long-term medical history. So Elvis plunges into the Louisiana bayous, racing against another local shamus, and soon finds not only the bashful parents, but a secret about Jodi that nobody told him when he was first hired. So far, so good: the first half of this tale is so cunningly tailored to Elvis's strengths--the cocky confidence, the droll humor, the aw- shucks authority--that reading it is like scrunching into a comfy featherbed. But just as it seems the case is winding down, Elvis stumbles onto an elaborate plot to smuggle illegals into the country. Jodi, who's been promised confidentiality, has a hard time dealing with this development, and no wonder: Except for some shared characters, this second plot has nothing to do with what she thought was her book. It's a lot less tricky and inventive, too, though a lot more violent. Half a masterpiece is better than none, but you've gotta feel for poor Jodi, abandoned still again just when she thought she finally had it made.
More book reviews at iDreamBooks.com