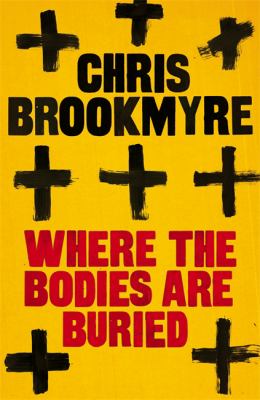 Where the bodies are buried / Chris Brookmyre.

| Private investigators -- Scotland -- Glasgow -- Fiction | Missing persons -- Investigation -- Scotland -- Glasgow -- Fiction | Colecção Suspense -- Fiction | Glasgow (Scotland) -- Social conditions -- FictionGenre/Form: Thrillers (Fiction) | Detective and mystery fiction.DDC classification: Rental Fiction Subject: While detective Catherine McLeod is investigating the murder of a local drug-dealer, suspecting it to be a portent of bigger crimes to come, aspiring actress Jasmine Sharp is reluctantly and incompetently earning a crust working for her uncle Jim's private investigation business. However, when Jim goes missing, Jasmine has to take on the investigator mantle for real, her only clue the last missing-person case her uncle was working on. Cautiously tracking down Glasgow gangland enforcer and professional assassin Glen Fallan, Jasmine stumbles into a web of corruption and decades-buried secrets that threatens to tear apart an entire police force.
Tags from this library: No tags from this library for this title. Log in to add tags.

Detective Catherine McLeod was always taught that in Glasgow, they don't do whodunit. They do score-settling. They do vendettas. They do petty revenge. They do can't-miss-whodunit. It's a lesson that has served her well, but Glasgow is also a dangerous place to make assumptions. Either way she looks at it, she recognises that the discovery of a dead drug-dealer in a back alley is merely a portent of further deaths to come. Elsewhere in the city, aspiring actress Jasmine Sharp is reluctantly - and incompetently - earning a crust working for her uncle Jim's private investigation business. When Jim goes missing, Jasmine has to take on the investigator mantle for real, and her only lead points to Glen Fallan, a gangland enforcer and professional assassin whose reputation is rendered only slightly less terrifying by having been dead for twenty years. Cautiously tracing an accomplished killer's footsteps, Jasmine stumbles into a web of corruption and decades-hidden secrets that could tear apart an entire police force - if she can stay alive long enough to tell the tale.

While detective Catherine McLeod is investigating the murder of a local drug-dealer, suspecting it to be a portent of bigger crimes to come, aspiring actress Jasmine Sharp is reluctantly and incompetently earning a crust working for her uncle Jim's private investigation business. However, when Jim goes missing, Jasmine has to take on the investigator mantle for real, her only clue the last missing-person case her uncle was working on. Cautiously tracking down Glasgow gangland enforcer and professional assassin Glen Fallan, Jasmine stumbles into a web of corruption and decades-buried secrets that threatens to tear apart an entire police force.

Having established his reputation with comic thrillers (beginning with Quite Ugly One Morning) and detouring briefly into the science fiction cul-de-sac of Pandaemonium, Brookmyre is off in a new direction in this straight-ahead crime thriller clearly designed as the start of a new series. When the battered body of a Glaswegian drug dealer turns up in an alley, DS Catherine McLeod, trying to make her mark in the almost exclusively lads' world of the Glasgow police, investigates. Meanwhile, across town Jasmine Sharp, a 20-year-old "daft wee lassie," has signed on to help her private investigator cousin. When he disappears, she gamely ploughs ahead, arriving finally under the wing of a shadowy figure with the unlikely name of Tron Ingrams. Only very gradually do the McLeod and Sharp stories intertwine as proof that all the crooked and mean streets of Glasgow converge in the biggest gang of all. VERDICT While longtime fans might just want to headbutt some sense into Brookmyre for renouncing his comic edge, fans of Lynda La Plante's "Prime Suspect" series and HBO's The Wire should more than make up the difference. [See Prepub Alert, 1/8/12.]-Bob Lunn, Kansas City, MO (c) Copyright 2012. Library Journals LLC, a wholly owned subsidiary of Media Source, Inc. No redistribution permitted.

Brookmyre (A Snowball in Hell) introduces Det. Insp. Catherine McLeod and PI Jasmine Sharp in her solid first entry in a new Glasgow crime series. In alternating chapters, perceptive Catherine looks into the murder of a drug dealer, who was a henchman of a local mobster, while inexperienced Jasmine searches for her PI uncle/boss, who went missing while working a case involving a family that disappeared decades before. Jasmine's only lead is Glen Fallan, a professional assassin who's rumored to have been dead for 20 years. Catherine's police investigation and Jasmine's hunt realistically intersect as each learns they are up against "the biggest gang in Glasgow," and that trust, even in the police force, is a rare commodity. Corruption, betrayal, and gallows humor fuel the noir plot, while family problems lend emotional depth, in particular, Jasmine's grief over her mother's death and Catherine's concern that she doesn't spend enough time with her two sons and husband. Agent: Caroline Dawnay, United Agents. (July) (c) Copyright PWxyz, LLC. All rights reserved.

Detective Superintendent Catherine McLeod is assigned the investigation of the torture-murder of a notorious killer and drug dealer, and Glasgow's entire police force braces for all-out war between rival, mad-dog Glaswegian drug gangs. At the same time, twentysomething Jasmine Sharp, a stressed-out, bumbling PI trainee, begins to search for Uncle Jim, a retired cop and PI who hired her and then disappeared. In time, their separate investigations dovetail. Brookmyre, well known in Great Britain for mixing black comedy into his thrillers, has veered toward a semiconventional procedural here, but he spikes his tale with internal police intrigues, bent coppers, and assorted ne'er-do-wells. Catherine, Jasmine, and a handful of other characters are well sketched, and almost every character is supplied with some cynical, funny dialogue. The body count is respectable, but nearly all the bloodiest mayhem takes place off page. Red herrings and plot convolutions abound, but it's Brookmyre's sense of the city and its no-nuance criminals that makes this one a winner.--Gaughan, Thomas Copyright 2010 Booklist

Two women investigators--a veteran police detective with a distant husband and two young boys and a struggling actress working for her uncle, an ex-cop, as a private detective--cross paths in this offbeat tale of ruthless mobsters in Glasgow. A Scottish crime novelist known for his satirical gore fests (One Fine Day in the Middle of the Night, 1999, etc.), Brookmyre here begins a new, straighter-faced procedural cop series. After a drug dealer is killed, Detective Catherine McLeod must penetrate not only the net of secrecy surrounding criminal lowlifes in "Glesca," but also the questionable motives of her superiors. Meanwhile, Jasmine Sharp, a slip-up waiting to happen, must get her act together after her uncle goes missing. He was working on a cold case involving the disappearance of a couple and had told their now-adult daughter he had news for her. Following clues to a women's shelter, Jasmine gets paired off with a handyman who goes by the unlikely name Tron Ingrams. After an attempt is made on her life, or his, he reveals he's really a bent cop's son, Glen Fallan, a name in one of her uncle's files. As more people are killed, maimed or disappear, Catherine's story becomes joined with Jasmine's and her former boss' pronouncement becomes apparent: "This is Glesca. We don't do subtle, we don't do nuanced, we don't do conspiracy...We do tit-for-tat, score-settling, feuds, jealousy, petty revenge. We do straightforward. We do obvious. We do cannaemisswhodunit." A brainy, barbed noir, this book takes its time setting the scene and establishing its characters. Most of its violence occurs off the page. But with its contrasting protagonists (it's easy to envision a series built around the endearing Jasmine), local color and language and skillfully orchestrated sense of bad things to come, the novel maintains a solid grip on the reader. Brookmyre isn't as well-known in the States as fellow Scottish mystery writers Ian Rankin, Val McDermid and Denise Mina, but this first-rate effort may change that.]] Copyright Kirkus Reviews, used with permission.
More book reviews at iDreamBooks.com