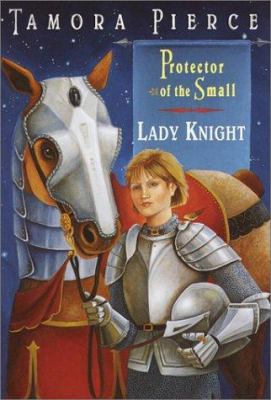 | Fantasy fiction -- JuvenileDDC classification: Online resources: Contributor biographical information | Sample text | Publisher description Summary: When she became a knight, eighteen-year-old Kel hoped to be given a combat post, but instead she finds herself named commander of an outpost of refugees, where she must face the unnatural forces of the evil Balyce.
Tags from this library: No tags from this library for this title. Log in to add tags.
Fiction notes: Click to open in new window
No physical items for this record

Protector of the Small #4 Keladry of Mindelan has finally achieved her life-long dream of being a knight. But it's not turning out as she imagined at all. With the land of Tortall at war with the Scanrans, she has been assigned to oversee a refugee camp. But Kel has had a vision in the Chamber--a vision of the man behind the horrific battle machines that her fellow knights and friends are now fighting without her. She is torn between a duty she has sworn and a quest that she feels could turn the tide of the war. . . .

When she became a knight, eighteen-year-old Kel hoped to be given a combat post, but instead she finds herself named commander of an outpost of refugees, where she must face the unnatural forces of the evil Balyce.

PW called this fourth and final book in the series, in which Keladry ("Kel") of Mindelan realizes her dream of becoming a knight but soon discovers that it brings unforeseen responsibilities, a "compelling conclusion." Ages 12-up. (Aug.)n (c) Copyright PWxyz, LLC. All rights reserved

Gr 6-9-Keladry of Mindelan's story concludes in the final book (Random, 2002) in Tamara Pierce's "Protector of the Small Quartet" series. Kel, the first Lady Knight in Tortall and thankful to have survived the Chamber of the Ordeal, is now ready to set out and confront the evil mage and killing devices that she was shown during her knighthood initiation. Unfortunately, though war has been officially declared with neighboring Scanran, Kel is denied her chance to fight, and is placed in charge of a refugee camp. She sets out to create a safe haven for those in her charge. When it becomes apparent that the camp is likely to become a target for Scanran's forces, Kel sets out to make sure that the refugees will be able to defend themselves. With strength, compassion, and often humor, Kel endears herself to the refugees and comes to care for them. She becomes conflicted, remembering the Chamber's charge to her to destroy the killing devices by defeating the "Nothing Man," but refuses to leave her people. Her hand is forced when they are captured, and Kel must go behind enemy lines on a suicidal mission to save them and turn the tide of the war. Bernadette Dunne's voice sounds a little mature for a young woman of 18, and the secondary characters' voices are rarely distinguished from one another by accent or tone. The story itself carries this audio version along. For fans of the previous titles in the series.-Jessica Miller, New Britain Public Library, CT (c) Copyright 2010. Library Journals LLC, a wholly owned subsidiary of Media Source, Inc. No redistribution permitted.

Gr. 6-9. In this new, gripping installment in the popular Protector of the Small series, Lady Knight Keladry has finished her grueling eight years of training just in time to face a difficult struggle--her country is at war with its neighbor, Scanra. Kel's recurrent dreams have told her that she has a special mission (finding an evil mage working for Scanra who is using children to create horrific killing devices). But before she can set out, she is given her first command, the creation of a refugee camp, which calls on all her talents. She must settle disputes, assign tasks, and train everyone, including children, to handle weapons. Unlike most fantasy heroines, Kel does not rely on magic. She is a fighter who clamps down on her feelings and taps her courage, cleverness, and moral outrage to fight evil. As in the previous books, Kel's world is completely realized in quick, precise detail, but this time the stakes are higher than usual: the kingdom readers have come to know fights for its survival and familiar characters die. Series fans will grab this. Susan Dove Lempke.

To her dismay, Keladry's first assignment as a knight is to run a refugee camp. Not only would she rather be in the thick of battle, but she longs to be about the task an oracle has charged her with--finding and stopping a sadistic mage who uses the souls of children to craft killing machines. As in the previous volumes, Kel's compassion for those who have been victimized drives her actions. Fans will be pleased with this conclusion to her tale. From HORN BOOK Spring 2003, (c) Copyright 2010. The Horn Book, Inc., a wholly owned subsidiary of Media Source, Inc. No redistribution permitted.

This fourth and final entry in the compelling Protector of the Small series finds 18-year-old Keladry of Mindelan (finally a full knight) handed a profound and confusing destiny by an immortal source. The Chamber of the Ordeal, a small room in which candidates for knighthood are tested, has ordered Kel to find and destroy the Nothing Man, a death mage using children's souls to fuel brutal killing machines. Meanwhile, however, her kingdom of Tortall is going to war, and Kel is required to serve alongside other knights and armies. Her assignment is to run a refugee camp near the warring border, a job which entails everything from military command of the camp to settling arguments between squabbling refugees. As the war rages on and Tortall begins to lose-largely because of the metal killing machines sent by the Nothing Man-Kel experiences an expertly written tension between her military assignment and her crucial, preordained task. But when her refugees are kidnapped by henchmen of the Nothing Man himself, Kel disobeys orders and risks execution in order to pursue her protectees into enemy territory and do what she does best: fight. Friends-human, dog, cat, horse, sparrow-offer the occasional tender moment and indispensable battle help. Appropriately larger in scope than the other volumes in this series and featuring vivid involvement with the young knight's dogged determination and physical feats, this gripping climax sees Kel fulfill her destiny and earn her legend-name. (cast of characters, glossary, map) (Fantasy. YA)
More book reviews at iDreamBooks.com