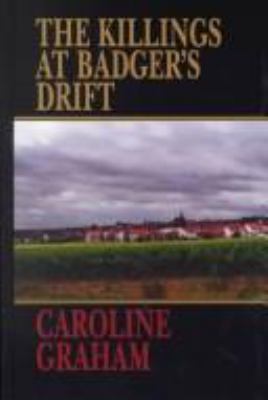 The British author makes her debut here in an uncommonly appealing mystery, set in a tranquil village, Badger's Drift. Learned Chief Inspector Barnaby and callow Sergeant Troy go to work when importunate, elderly Miss Bellringer insists that her friend, Emily Simpson, did not die of a heart attack as her doctor claimed, but was murdered. An autopsy proves Miss Bellringer right; Emily had imbibed a Socratic mix of wine and hemlock. Spreading alarm throughout the community, an unseen murderer strikes again, leaving sly Mrs. Rainbird's bloody corpse to be found by her son, the local undertaker. As Barnaby and Troy investigate, they turn up evidence of another crime years earlier, and several suspects. Among them are the doctor's promiscuous wife, a young woman whose brother objects to her marriage to a rich widower and a Lady Chatterley-type gamekeeper. Diligent detecting brings the chief and his bumbling assistant to a sensational expose. Graham makes the characters humanly believable in her witty and tragic novel, a real winner. (January 21) (c) Copyright PWxyz, LLC. All rights reserved

Graham has obviously read and studied the classic British mystery very thoroughly, for she has produced an excellent first novel using all the genre's familiar figures, settings, and plot devices. When spinster Emily Simpson, age 80, is found dead in her picturesque cottage in the tiny village of Badger's Drift, the pompous Dr. Lessiter has no reason to suspect that she died from anything other than natural causes. But it does not satisfy Miss Simpson's closest friend, Lucy Bellringer, who promptly contacts Chief Inspector Barnaby. Looking at the scene of the death, the inspector notices a very odd smell, which turns out to be hemlock a good dose of which is discovered in poor Miss Simpson's body. In such a small village, everyone is questioned, and in the best tradition of British detective fiction, all kinds of queer things begin to surface. Not the least of these facts is that, while gathering wildflowers, Miss Simpson apparently caught two villagers in flagrante delicto. With crisp dialogue, good characters, expert pacing, and a very credible plot, this compelling story makes Graham a definite comer in the world of British mysteries. SWM. [CIP] 87-1284

Add first-novelist Graham to the herbaceous border school of detecting. When Miss Emily Simpson, a spinster of course, is stalking the meadow for signs of the spurred coral root orchid, she sees them making love. Bent on secrecy, one or both murder Miss Emily with hemlock (!), which as every keen gardener knows can easily be mistaken for parsley, a fact they hope will persuade Chief Inspector Barnaby that the death was nothing more than an infortuitous picking of the wrong clump for tea. Miss Emily's pal, octogenarian Lucy Bellringer, will have none of it and presents herself as Hastings to Barnaby's Poirot. Barnaby, now saddled with two helpers he doesn't want (Lucy and Sargeant Troy, the brashly snobbish youth he relegates to chauffeur), ultimately solves this case, which intertwines with a supposedly accidental death of some years back, while meandering from pub to doctor's surgery to manor house to artist's locked studio with botanical references en route. Village life, it would seem, is nothing if not incestuous, and among the more memorable dalliances is the frolicking mum and sonny team of Iris and Dennis Rainbird (he's the local pouff, also the undertaker; she's the obese and conniving hamlet blackmailer, keeping a meticulous journal of the comings and goings of the villagers). Many genteel inquisitions, lucky breaks and cliches later (among them: a dog that doesn't bark, a dying message, a mysterious phone call), the village is cozy again, albeit minus four of its citizens. An OK debut, but it might have been spectacular if Graham had focused more on the horticulture or more on the rococo sexual whimsies. Another Barnaby investigation is promised; let's hope it naughtier. Copyright ©Kirkus Reviews, used with permission.
More book reviews at iDreamBooks.com