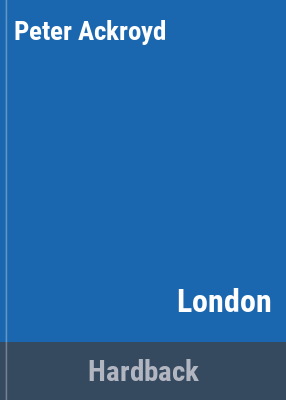 Much of Peter Ackroyd's work has been concerned with the life and past of London but here, as a culmination, is his definitive account of the city. For him it is an organism with its own laws of growth and change, so this book is a biography rather than a history. Ackroyd reveals the dozens of ways in which the continuity of the city survives - in ward boundaries unchanged since the Middle Ages, in vocabulary and in various traditions - showing London as constantly changing, yet forever the same in essence.

Include bibliographical references and index

Biographer/novelist Ackroyd (e.g., The Life of Thomas Moore) offers a sweeping, highly readable account of London's colorful and complicated history. In encyclopedic detail, he discusses everything from the city's crime and its theater to the notorious fog, plagues, and Great Fire of 1666, from which the city had to be almost built. He also provides a useful travelog, discussing London's many notable buildings, neighborhoods, and other features rich with stories, among them Newgate Prison, "an emblem of death and suffering," the "dirty" East End, and, of course, the Thames, London's "river of commerce." Characters such as infamous "prison-breaker" Jack Sheppard are vividly re-created, as are scenes like the sights and smells of the market in 1276 and the bloody Notting Hill riots in 1958. The book is full of both horrors, including the overwhelming number of beggars and the "impaled heads of traitors" in the 1600s, and soaring achievements, as London rises to the "center of world commerce" in the 1800s. Ackroyd's passion for this remarkable city is clearly evident. Recommended for all public libraries. [Previewed in Prepub Alert, LJ 6/1/01.] Isabel Coates, Boston Consulting Group, Brampton, Ont. (c) Copyright 2010. Library Journals LLC, a wholly owned subsidiary of Media Source, Inc. No redistribution permitted.

Novelist and biographer Ackroyd (The Plato Papers; T.S. Eliot; etc.) offers a huge, enthralling "biography" of the city of London. The reader segues through this litany of lists and anthology of anecdotes via the sketchiest of topical linkages, but no matter not a page is dull, until brief closing chapters in which Ackroyd succumbs to bathos, for which he's instantaneously redeemed by the preceding chapters. He admits to using no original research, openly crediting his printed sources. Ackroyd examines London from its pre-history through today, artfully selecting, organizing and pacing stories, and rendering the past in witty and imaginative ways. "The opium quarter of Limehouse," he tells readers, for example, "is now represented by a Chinese take-away." Fast food, it seems, was always part of the London scene. When poet Thomas Southey asked a pastry cook why she kept her shop open in the worst weather, she told him that otherwise she would lose business, "so many were the persons who took up buns or biscuits as they passed by and threw their pence in, not allowing themselves time to enter." Ackroyd covers unrest and peace, fires and ruins, river and rail transport, crime and punishment, wealth and poverty, markets and churches, uncontrolled growth and barely controlled filth. If there is a hero among the throngs, it may be engineer Joseph Bazalgette, who in 1855 began building 1,265 miles of sewers to contain the Stygian odor of progress and keep the huge, ugly metropolis livable. No one should mind the extraordinary price of this extraordinary achievement. B&w illus., maps not seen by PW. (On sale Oct. 16) Forecast: Published to acclaim in England, this is virtually guaranteed major review coverage here, and the publisher will also shoot for national media. Anglophiles and others will rejoice. (c) Copyright PWxyz, LLC. All rights reserved

This trip through London, conducted by novelist/biographer Ackroyd, is less concerned with chronology than with human drama. (c) Copyright 2010. Library Journals LLC, a wholly owned subsidiary of Media Source, Inc. No redistribution permitted.

Award-winning author Ackroyd has written an enjoyable, enlightening, and monumental study of London. He uses recent histories of London, such as Roy Porter's London: A Social History (CH, Jun'95) and Stephen Inwood's A History of London (CH, Mar'00), but relies heavily upon printed primary sources. The organization is essentially topical, which enables him to roar efficiently through 2000 years of London's history. The book is well titled, for Ackroyd views London as a living organism that, like the Phoenix, periodically rejuvenates itself. London is perpetually old, but always new. Ackroyd emphasizes the continuities that cross the centuries, especially commerce and trade, which have energized London from its beginning. The author has the knack of juxtaposing some continuities--rich and poor, dark and light, day and night, high culture and downright savagery--as no other writer does. The last decade gets the weakest coverage; the popular election of the Lord Mayor is not mentioned. Ackroyd lives in the heart of London, and his love of it equals that of Sam Johnson's. This highly recommended book is essential for anyone who wants to understand London. W. J. Hoffman Jr. emeritus, Hiram College

Yes, an 800-page history of London! Granted, it will take a persevering reader with a definite interest in European history and culture to undertake this major reading project. But readers who fit that bill will be both edified and charmed by the renowned British novelist and biographer's chronicle of the "life" of the British capital. Ackroyd perceives London "as a human shape with its own laws of life and growth." From Celtic settlement in the misty days of yore, to its reinvention as a Roman fortress, to its uncontrolled growth as the undisputed political center of England in the Middle Ages, to its majestic rise as the epicenter of a mighty empire in the nineteenth century, to a city of immigrants in the twenty-first, the overarching theme of London's "biography" is that the city "is based upon power" and is "truly the epitome of all England." Glorious detail limns how life was led down London's streets and byways during these epochs. For all its length, this is an irresistible read. --Brad Hooper

An impressionistic history of England's capital city, by British novelist/biographer Ackroyd (The Plato Papers, 2000, etc.), who knows his subject well and writes about it with considerable passion. This is not a history in any usual sense of the term, still less a travelogue or walking guide, although it has elements of all of these genres. What the author attempts to provide instead is a roughly chronological portrait of the character or soul of a great metropolis, drawn in large part from contemporary accounts of widely divergent veracity and literary skill. Folk tales, ballads, royal chronicles, Restoration comedies, journalism, court records, ecclesiastical histories, novels, biographies, and gossip columns (going back to Addison and Steele) all come into play, and the resulting mosaic is graced by a richness and depth of color that go a long way towards making up for the unwieldy size and loose organization. The "London as Theatre" section, for example, takes us into the bear-baiting pit as well as the Globe Playhouse, while "London's Outcasts" examines the plight of the city's downtrodden from the medieval beggars clustered about the gates of churches and monasteries to the madmen who haunted the asylum wards of Bedlam. Eventually Ackroyd finds his focal concern in wondering "what is it, now, to be a Londoner?" He concludes that the city is of such immensity, so variegated in its component functions and populations, and so rich in historical associations, that it is "all singular and all blessed." Although the author does not quote Samuel Johnson's aphorism that "when a man is tired of London, he is tired of life," he does illustrate Johnson's assertion that "London has therein all that life affords." Somewhat rarefied, but a splendid tribute to the great metropolis. Author tour
More book reviews at iDreamBooks.com