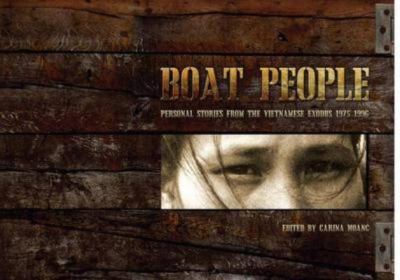 | Vietnam -- Emigration and immigration -- HistoryDDC classification: 305.4889592 Summary: Vietnamese migrants from around Australia share, in their own words, stories, photos, letters and ephemera. Includes interviews and photos by the journalists and photo journalists who covered the mass migration of Vietnamese from their country in the years after the Vietnam War.
Tags from this library: No tags from this library for this title. Log in to add tags.

The years 1975 to 1996 were witness to the largest mass migration in modern history, with more than a million people leaving their war-torn homeland, Vietnam, in search of safety.

Forces migrations are usually fraught with danger and even hazard as the displaced people negotiate mountains, deserts and oceans in all kinds of weather. What was unique about the Vietnam Exodus was that the only route for escape for over a million people was by sea - across open water - and so the only way was by boat. Subsequently this group of refugees has become known the world over as the 'boat people'.

Most of the escape boats has been built as river craft plying trade on inland waterways. They were not designed to stand up to the rigours of open-water travel across the South China Sea and often simply fell apart in conditions more challenging than a medium swell. For this reason alone many thousands perished, but others succumbed to starvation, dehydration and cold-blooded attacks by Thai pirates. One in three boat people never completed their journey. Those who did survive it have become a diaspora of Vietnamese people making new lives for themselves in many countries around the world.

This beautiful book by Carina Hoang portrays just a handful of experiences of members of this new diaspora - the perilous sea journey, the time spent in their temporary island camps as refuges and their final journey to their new adopted homelands. It is a testimony to the human spirit.

'They piled on top of one another in wooden boats, men, women and children. So desperate to escape their war-torn home, more than a million people would risk everything to tackle the high seas in search of safe haven. Many never made it to land. Those who did, endured unimaginable horrors. Told simply in their own words, Boat People gives voice to some of the survivors of the Vietnamese exodus, the largest mass migration in modern history.' The West Australian

Vietnamese migrants from around Australia share, in their own words, stories, photos, letters and ephemera. Includes interviews and photos by the journalists and photo journalists who covered the mass migration of Vietnamese from their country in the years after the Vietnam War.