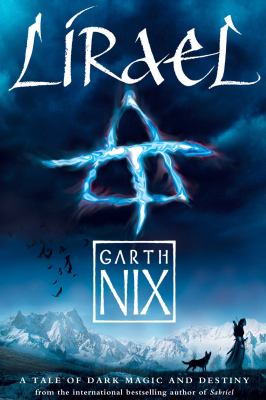 | Magic -- Teenage fictionGenre/Form: Fantasy fiction. | Young adult fiction. | Teenage fantasy fiction. | Teen fiction.DDC classification: Young Adult Subject: Abandoned by her mother and not knowing who her father is, Lirael looks like no one in her large extended family--making her feel like she's never been a true daughter of the Clayr. She's doesn't even have the Sight, the ability to see into possible futures, that is the birthright of every Clayr. Nonetheless, Lirael undertakes a desperate mission to save the Old Kingdom.
Tags from this library: No tags from this library for this title. Log in to add tags.
Fiction notes: Click to open in new window

New YA edition of book two in the best-selling Old Kingdom trilogy. Set in the same dark, magical world as Garth Nix's Sabriel and Abhorsen , this is a spellbinding tale of discovery, destiny and danger, from an exceptional fantasy talent.

Abandoned by her mother and not knowing who her father is, Lirael looks like no one in her large extended family--making her feel like she's never been a true daughter of the Clayr. She's doesn't even have the Sight, the ability to see into possible futures, that is the birthright of every Clayr. Nonetheless, Lirael undertakes a desperate mission to save the Old Kingdom.

Gr 7 Up-Lirael has never fit in with her hundreds of cousins, the Clayr. Orphaned, lonely, shy, and painfully aware of her physical differences from them, she also lacks their Sight of the future. However, when her skill with magic and her companion, the Disreputable Dog, help her accomplish a quest foreseen hundreds of years before, the Clayr entrust her with an even more perilous search. Elsewhere in the Old Kingdom, Prince Sameth, son of King Touchstone and the Abhorsen Sabriel, is convinced he is unfit for his inherited duties. Slated to succeed his mother in protecting the Kingdom from the ravages of the Dead, he finds that his first journey into Death has left him too frightened to return. Despite his fears, he sets out to rescue a friend headed into danger. Lirael's and Sameth's paths converge, and they learn more about their pasts and the nature of the Old Kingdom's magic as they continue their quest together. While less immediately appealing than Sabriel, the heroine of Nix's first book about the Old Kingdom, (HarperCollins, 1996), the two teen protagonists share a mixture of insecurity and courage that will speak to adolescent readers. The fast-paced plot is packed with harrowing encounters with necromancers and magical foes. Nix continues to unfold the mysteries of the Old Kingdom, exploring the haunting and unusual, exhaustively and flawlessly conceived connections among its rulers and guardians, and the magic that infuses them all. A must-read for fans of the first book, Lirael will also fascinate readers new to the series.-Beth Wright, Fletcher Free Library, Burlington, VT (c) Copyright 2010. Library Journals LLC, a wholly owned subsidiary of Media Source, Inc. No redistribution permitted.

Gr. 7^-12. Years have passed since the events in Sabriel (1996). The Old Kingdom is again under threat, this time from a sinister necromancer bent on freeing an ancient, incredibly evil being. Lirael, a daughter of the Clayr, despairs of ever gaining the gift of Sight that will mark her as an adult. Even so, she finds the fate of the kingdom in her hands and in those of Sameth, teenage son of the Abhorsen Sabriel and King Touchstone. With the help of the Disreputable Dog and Mogget, an elemental bound in the body of a cat that serves the Abhorsen, Lirael and Sameth wage a deadly war to stop the evil forces. There is some contrivance in the story, but the characterizations are appealing, and Nix not only maintains the intricate world he created for the earlier book but also continues the frenetic pace of the action and the level of violence. The cliffhanger ending sets readers up for a third book, to be called Abhorsen. --Sally Estes

Sabriel's quest to find her father begins without warning when she is pulled from her life at a select private school and plunged into the Old Kingdom, a world of magic, spells, and mystery. In the sequel, Lirael's adventure starts in the Great Library of Clayr, whose ""old levels"" are so hazardous they can only be entered armed. The pressurized sense of danger that drives these fantasies makes both of them ideal choices for audio. Curry is a master of the deftly placed pause, using silence the way an artist uses negative space. The voice he chooses for the narrator, deliberate and grave, is a foil for his seamless transits from character to character. And at over twenty-five hours in recorded time, there is ample opportunity for listeners to take root in Nix's richly imagined landscape. (c) Copyright 2010. The Horn Book, Inc., a wholly owned subsidiary of Media Source, Inc. No redistribution permitted.

In a riveting sequel to his acclaimed Sabriel (not reviewed), Nix recreates his trademark mélange of horror and fantasy. For the 18 years that King Touchstone and Queen Sabriel have battled necromancers and their Dead minions, orphaned Lirael has grown up among the Clayr sisterhood. Bereft of their prophetic Sight, she finds consolation in their labyrinthine library, honing her magecraft amid its ancient tomes and artifacts, and solace in the company of the Disreputable Dog of ambiguous magical provenance. Meanwhile, Prince Sameth has left school, shamed by his less-than-regal character, and terrified of inheriting Sabriels duties opposing the Dead. But when a long-buried evil begins stirring up necromantic menaces and meddling in inter-kingdom politics, Lirael and Sam are forced to abandon their fears and dreams in order to shoulder burdens they could never imagine. This is pure-quill epic fantasy, with satisfyingly intricate world building that still propels the plot. Nix subtly invests minor characters, objects, even the landscape with vivid life, and his villains are acidulous distillates of pure malevolence. Lirael and Sameth possess rich personalities, sufficient to sustain the complex parallel narrative in which they do not meet until near the conclusion; in a refreshing departure from gender stereotypes, Lirael is mature, restrained, and analytical, while Sam is passionate, impulsive, and creative. The sarcastic feline familiar, Mogget, and the engagingly enigmatic Disreputable Dog add charm and sly humor to a tale that would otherwise be desperately grim. Readers who like their fantasy intense in action, magisterial in scope, and apocalyptic in consequences will revel in every word, especially the last three: To be continued. (Fiction. YA)
More book reviews at iDreamBooks.com