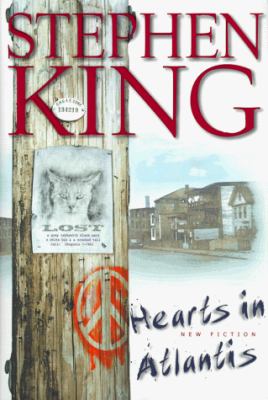 Five interconnected, sequential tales set in the years between 1960 and 1999 center around the Vietnam War and weave together innocence, experience, truth, deceit, loss, and recovery.

A King of a different sort weighs in with some short fictionÄfour pieces drawing on the U.S. experience in Vietnam: "Low Men in Yellow Coats," "Hearts in Atlantis," "Blind Willie," and "Why We're in Vietnam." A BOMC main selection. (c) Copyright 2010. Library Journals LLC, a wholly owned subsidiary of Media Source, Inc. No redistribution permitted.

This collection of five thematically linked short stories dwells on the legacy of the 1960s. They share a collective moodiness, a feeling of depressed hangover coming after youth has been lost and the nation has suffered troubled times. Read aloud, this pungent atmosphere is especially strong. A-list actor Hurt stylishly performs the lengthy opener, "Low Men in Yellow Coats," in which 11-year-old Bobby Garfield falls under the spell of an older man his mother has taken in as a boarder (a father figure who introduces him first to literatureÄLord of the FliesÄthen to supernatural phenomena). Hurt skillfully evokes pathos from the story's fine detailing: its sense of small-town place and Bobby's child's-eye-view of the evil characters around him. King reads the title story, "Hearts in Atlantis," about Maine college students who mindlessly play cards instead of studying while the Vietnam War rages in the background. The author's modest, reedy voice rings with autobiographical truthÄas the protagonist is a young would-be writer, nave to the ways of the world. Taken together, at 21 hours' listening, however, King's shining moments too often give way to fatigue: the stories are repetitious, full of plot rehashings and meaningless asides. Also available on CD. Simultaneous release with the Scribner hardcover. (Sept.) (c) Copyright PWxyz, LLC. All rights reserved

YA-An intricate and compelling tapestry of the `60s and those who came of age during that turbulent decade. Readers first meet 11-year-old Bobby Garfield in suburban Connecticut in 1960. He and his friends, Sully John and Carol, come to the end of their collective childhood during that summer when violence, rage, guilt, shame, and heroism break up their close-knit relationship. The second story begins six years later on the University of Maine campus. A card game, Hearts, threatens the college future of a group of freshmen. Outside, the Vietnam War and its concurrent rebellion are raging. Pete, the protagonist, offers a firsthand view of the craziness of the time. The link to the first story is Carol, Bobby's childhood friend, with whom Pete falls in love. The next two stories each follow another figure from the summer of 1960: Bobby's friend Sully John and a member of a trio that assaulted Carol. Both young men are Vietnam vets, each one crippled in his own way from his war experience. The final story finds middle-aged Bobby returning to Connecticut, coming full circle with the events of his life. This is a very long book; however, after reading a few pages, most teens will be hard-pressed to put it down. The characters are compelling and well drawn, the action is ingeniously interwoven from story to story, and the feel of the 60s, and the baggage carried into later decades, is vivid, harsh, and absolutely true.-Carol DeAngelo, Kings Park Library, Burke, VA (c) Copyright 2010. Library Journals LLC, a wholly owned subsidiary of Media Source, Inc. No redistribution permitted.

Sixth-graders Bobby, Carol, and Sully-John are best friends in 1960, when Bobby's mistrustful mother takes a boarder, sixtyish Ted Brautigan. A friendship blossoms between Bobby, a reader, and Ted, who guides the boy into serious literature with Lord of the Flies and its rueful message about group behavior destroying individual goodness. That summer, Bobby comes upon an instance of that message when he discovers Carol after she has been badly beaten by three older boys, one of whom had always been nice to her before. Although no bigger than she, Bobby carries Carol to Ted, who fixes her dislocated shoulder before he flees from "Low Men in Yellow Coats." Not long after, Bobby moves away and into a troubled adolescence. End of story--at least of the first of the five stories that make up King's strongest book since Delores Claiborne (1992). In the other four, Carol, Sully-John, and Bobby reappear, sometimes only tangentially, years down the pike. In "Hearts in Atlantis," Carol saves a male fellow freshman at the University of Maine from his own entrapment in group craziness. "Blind Willie" presents the curious adulthood of the conscience-stricken one of Carol's three attackers, who has since saved Sully-John's life in Vietnam. "Why We're in Vietnam" shows how Sully-John's life actually ends in 1999, and in "Heavenly Shades of Night Are Falling," Bobby and Carol meet after their friend's funeral. A sprinkling of supernatural elements, involving Ted and those low men, link this novel-in-stories to the world of King's ongoing series, The Dark Tower. Primarily, however, this is a rich, engaging, deeply moving generational epic, something of a baby boomers' equivalent to Vance Bourjaily's great Korean War^-generation novel, The Violated (1958). --Ray Olson

King's fat new work impressively follows his general literary upgrading begun with Bag of Bones (1998) and settles readers onto the seabottom of one of his most satisfying ideas ever. Set in fictional Harwich and semifictional Bridgeport, the story weaves five Vietnam-haunted small-town New England stories into a deeply moving overall vision. The five are: ""Low Men in Yellow Coats,"" set in 1960 and at about 250 pages the longest; ""Hearts in Atlantis,"" set in 1966; ""Blind Willie,"" set in 1983; ""Why We're in Vietnam"" and ""Heavenly Shades of Night Are Failing,"" both set in 1999. The umbrella title fits well, with King showing us the lost, time-sunken continent of the late Eisenhower era, as hearts from the deep sea of that Hopperesque time slowly rise to the tormented surface of the present-day. Whether his characters are stock or not, it's impossible not to enjoy King's gentle ways of fleshing them out, all the old bad habits and mannerisms gone as he draws you into the most richly serious work of his career. Elderly Ted Brautigan, who may seem a bit like Max von Sydow, moves into a house occupied by Bobby Garfield, age 11, and his hard-bitten mother, Liz, a secretary for real-estate agent Don Biderman, with whom she's having an unhappy affair. Brautigan hires Bobby to read the paper aloud, gives him Lord of the Flies--and also strange warnings about low men in yellow coats and posters about lost dogs. Report any sighting of these! Ted also has attacks of parrot pupilitis, the pupils opening and closing as he stares at other worlds. Although some characters wander in from King's inferior occult Western Dark Tower series, their cartoony, computer-graphic effects making them seem in the wrong novel, this minor lapse fades before King's memory-symphony of America during Vietnam. Page after page, a truly mature King does everything right and deserves some kind of literary rosette. His masterpiece. Copyright ©Kirkus Reviews, used with permission.
More book reviews at iDreamBooks.com