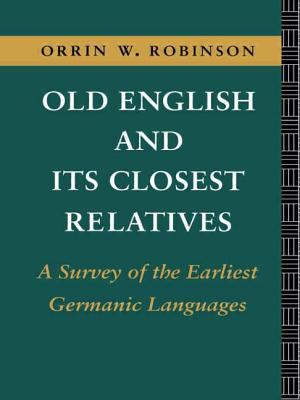 Old English and its closest relatives : a survey of the earliest Germanic languages / Orrin W. Robinson.

This accessible introductory reference source surveys the linguistic and cultural background of the earliest known Germanic languages and examines their similarities and differences. The Languages covered include:Gothic Old Norse Old SaxonOld English Old Low Franconian Old High German Written in a lively style, each chapter opens with a brief cultural history of the people who used the language, followed by selected authentic and translated texts and an examination of particular areas including grammar, pronunciation, lexis, dialect variation and borrowing, textual transmission, analogy and drift.

This well-structured, terse account of the early Germanic languages fills an obvious gap in reference books on historical linguistics. Striking an excellent balance between readability for the nonspecialist and sufficient detail for classroom usage, the volume begins with a straightforward chapter on the background of English and German in the Germanic family of languages and the Indo-European system at large. After a sketch of pronunciation and grammer in Germanic from a comparative point of view, Robinson examines individual language traditions in a series of seven chapters: Gothic, Old Norse, Old Saxon, Old English (Anglo-Saxon), Old Frisian, Old Low Franconian, and Old High German. What makes the book so useful for a variety of readers and classes is the fact that each of these seven units covers (in brief compass) the history of the speakers, the important extant texts, sample passages with glossaries and literal translations, and a section on spelling and grammar. Extremely useful for linguistics and medieval literature courses at all levels; belongs in all college and university libraries. J. M. Foley; University of MissouriDSColumbia
More book reviews at iDreamBooks.com