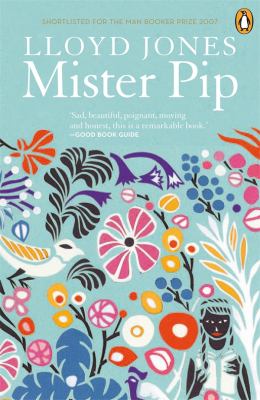 Lloyd Jones' new novel is set mainly in a small village on Bougainville, a country torn apart by civil war.

Matilda attends the school set up by Mr Watts, the only white man on the island. By his own admission he's not much of a teacher and proceeds to educate the children by reading them Great Expectations. Matilda falls in love with the novel, strongly identifying with Pip. The promise of the next chapter is what keeps her going; Pip's story protects her from the horror of what is happening around her - helicopters menacing the skies above the village and rebel raids on the ground. When the rebels visit the village searching for any remaining men to join their cause, they discover the name Pip written in the sand and instigate a search for him. When Pip can't be found the soldiers destroy the book. Mr Watts then encourages the children to retell the story from their memories. Then when the rebels invade the village, the teacher tells them a story which lasts seven nights, about a boy named Pip, and a convict . . .

Also available as an eBook

"On a lush island in the South Pacific, civil war threatens daily life. Thirteen-year-old Matilda and her friends haven’t seen the inside of a classroom for months until the village recluse emerges to breathe life back into an old book. Surrounded by the constant threat of violence, their new teacher introduces the children to a boy called Pip and a man named Mr. Dickens. But on an island at war, the power of stories can have deadly consequences."-- Publisher description.

A promising though ultimately overwrought portrayal of the small rebellions and crises of disillusionment that constitute a young narrator's coming-of-age unfolds against an ominous backdrop of war in Jones's latest. When the conflict between the natives and the invading "redskin" soldiers erupts on an unnamed tropical island in the early 1990s, 13-year-old Matilda Laimo and her mother, Dolores, are unified with the rest of their village in their efforts for survival. Amid the chaos, Mr. Watts, the only white local (he is married to a native), offers to fill in as the children's schoolteacher and teaches from Dickens's Great Expectations. The precocious Matilda, who forms a strong attachment to the novel's hero, Pip, uses the teachings as escapism, which rankles Dolores, who considers her daughter's fixation blasphemous. With a mixture of thrill and unease, Matilda discovers independent thought, and Jones captures the intricate, emotionally loaded evolution of the mother-daughter relationship. Jones (The Book of Fame; Biografi) presents a carefully laid groundwork in the tense interactions between Matilda, Dolores and Mr. Watts, but the extreme violence toward the end of the novel doesn't quite work. Jones's prose is faultless, however, and the story is innovative enough to overcome the misplayed tragedy. (July) (c) Copyright PWxyz, LLC. All rights reserved

"*Starred Review* This prizewinning novel by New Zealand author Jones is an eloquent homage to the power of storytelling. Thirteen-year-old Matilda is at a loss to understand the violence that has torn apart her tropical island. Her village, caught in the cross fire of the conflict between government troops and local armed rebels, has lost its teachers. The only white man to stay behind, the eccentric Mr. Watts, married to a local woman who is generally thought to be mad, takes over the post as teacher and begins to read to the class from his favorite novel, Charles Dickens' Great Expectations. Initially flummoxed by the meanings of such alien words as frost and moors, Matilda and her classmates soon become entirely riveted by the story and identify so heavily with the orphan Pip that Victorian England becomes more real to them than their own hometown. Provided with firsthand evidence of the power of imagination, Matilda increasingly sees it as a way to survive and even thrive amid the chaos of civil war. The accessible narrative, with its direct and graceful prose, belies the sophistication of its telling as Jones addresses head-on the effects of imperialism and the redemptive power of art."--"Wilkinson, Joanne" Copyright 2007 Booklist

Bringing Great Expectations to desperate children ravaged by revolution, an eccentric teacher becomes a martyr to literature and transforms the prospects of a strong-willed girl. He's actually "Mr. Watts." But so identified does he become with Dickens' wondrous coming-of-age narrative that he's known as "Mr. Pip." Jones (Paint Your Wife, 2004, etc.) juxtaposes this English exile, married to a native black woman and now the last white man on an unspecified Survivor-style island, with teenaged Matilda, his most eager student. He's a stopgap professor, really, just volunteering to instruct 20 kids, seven to 15 years old, who gather for shelter from the war between the "redskins" and the "rebels." A long-bearded Scheherazade in a white linen suit, Watts draws out the telling of Dickens' classic to the children and soon we have the age-old tale: story as balm, spell, savior. He also invites the island mothers in for show 'n' tell: chances to share their wisdom. They offer fishing tips; rhapsodies of the sea; and one tells of a woman who "once turned a white man into marmalade and spread him onto her toast." That tale spinner is Matilda's mother, and she becomes Watts's rival, her pidgin Bible contrasting his Victorian tale; she is imperiled nature; he's threatening culture. He reminisces about "the smell of fresh-mown grass and lawnmower oil"; she fears the capture of her daughter's soul. And yet in time, for Matilda's sake, the pair negotiate a tremulous peace--one soon savaged by murder, as the redskins descend. As the revolution intensifies, the schoolhouse burns, along with Great Expectations. And Watts's last injunction to his students is that they rebuild the story orally, for themselves, piece by piece. A little Gauguin, a bit of Lord Jim, the novel's lyricism evokes great beauty and great pain. Copyright ©Kirkus Reviews, used with permission.
More book reviews at iDreamBooks.com