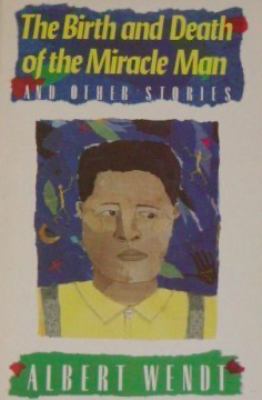 The birth and death of the miracle man : a collection of short stories / Albert Wendt.

| Islands of the Pacific -- Social life and customs -- Fiction | Western Samoa -- Social life and customs -- Fiction | New Zealand -- FictionDDC classification:
Contents:
A talent -- Justice -- The birth and death of the miracle man -- Elena's son -- Exam failure praying -- The balloonfish and the armadillo -- Prospecting -- I will be our saviour from the bad smell -- Birthdays -- Daughter of the mango season -- Crocodile -- Hamlet.
Tags from this library: No tags from this library for this title. Log in to add tags.

A talent -- Justice -- The birth and death of the miracle man -- Elena's son -- Exam failure praying -- The balloonfish and the armadillo -- Prospecting -- I will be our saviour from the bad smell -- Birthdays -- Daughter of the mango season -- Crocodile -- Hamlet.

These 12 short stories set in Samoa seem at first like fables of a simpler life, yet taken together they prove to be thought-provoking modernistic parables. The title narrative probes one villager's existential dilemma: Fiasola Ta'ase, a schoolteacher, feels that his life has lost meaning until he slays the ``miracle man'' growing inside him. In ``Prospecting,'' the search for gold leads to a burial ground and, oddly, to a new kind of richness and fertility. Several of these tales are entertaining character studies which easily cross cultural lines, as in ``A Talent,'' about a man whose only skill is thievery. Wendt (Leaves of the Banyan Tree moves easily among his characters, evoking a young girl's curiosity and intellectual acuity as vividly as an older man's feelings upon the death of his father. And in all of them, the reader unfamiliar with Polynesian customs will be able to appreciate the beauty of the land, its people, and its collective spirit. (July 18) (c) Copyright PWxyz, LLC. All rights reserved

An earnestly uneven, sometimes sluggish, now and then charming collection of 12 stories about life in Samoa, by the author of The Banyon (1983). Some of the pieces are so slight as only to be sketches, as in ""Exam Failure Praying,"" about a boy who thinks he may kill himself for failing his exams (""Last month I sit the form four exam and even with all my prayers I still fail it and now I am too afraid for to tell my father and my aiga""). Others are longer, if still sketch-like, as in ""A Talent,"" the portrait of a man who supports his family by petty thieving, or ""Elena's Son,"" in which a boy finds that his father was killed (with village approval) for being an adulterer and rake. Other stories are more expansive, though seldom with the fresh air of an originality that their setting makes a reader yearn for. In ""The Balloonfish and the Armadillo,"" a grown man burns his dead, tyrannical father's papers, and discovers a touch of bittersweet love in some old, childhood drawings. ""Prospecting,"" set in 1893, is the tale of a village-worth of bones discovered by men looking for gold; and in ""Daughter of the Mango Season,"" set in 1894, a young girl becomes aware of her island's pre-Christian religious beliefs, with the subtly touching result that her father, a pastor, takes on a special, and perhaps loving, proprietorship of her. ""I will Be Our Saviour from the Bad Smell"" is an exploratory political satire--in the deadpan tones of Swift, Orwell, Kafka, and Barthelme--about a community enveloped by a terrible stench, as if it were ""trapped in a dead egg."" Political allegory is hinted at again in ""Hamlet,"" when a below-average student becomes a briefly inspired reciter of Shakespeare, but has nothing to offer afterward (says his young teacher, ""we were again mired in our uninspired, boring normality without vision or daring, trapped in our perpetually deadening sanity""). Sometimes stumbling rather audibly in tone--""His reply was simple (and really put the shits up me!),"" says the sixth-form teacher in ""Ham. let""--these are stories from a far, exotic place, but narrowly missing the clarity and originality of theme and voice that may be yet to come. Copyright ©Kirkus Reviews, used with permission.
More book reviews at iDreamBooks.com