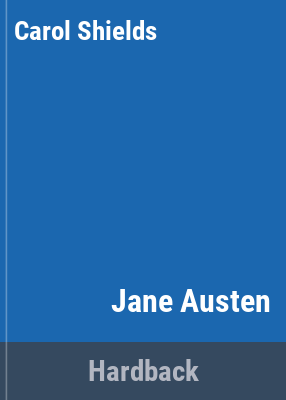 In this charming book, the prizewinning novelist Carol Shields, whose novels have themselves been compared to the works of Jane Austen, gives us a beautifully written, perceptive look at the life of one of the finest and most popular English novelists of all time. Jane Austen was born in 1775 in the remote Hampshire village of Steventon. Her parents, George Austen, Rector of Steventon, and his wife, Cassandra Leigh Austen, belonged to what was then called the lesser gentry. They were never financially secure but their education and family connections meant they were not at a disadvantage when set beside their wealthier neighbours. Jane Austen spent the first 25 years of her life in Steventon and the last eight in nearby Chawton, and did most of her writing in these two places. She never married although many of her novels are about marriage, and always lived with her parents and sister Cassandra. Whilst not unaware of the larger political and social goings-on at the time, she chose a small canvas for her novels, preferring to focus on the family as a microcosm through which to explore human nature. Sir Walter Scott praised the delicate observation and fine judgement in her novels, which she herself characterised as #65533;the little bit (two inches wide) of ivory on which I work with so fine a brush, as produces little effect after much labour#65533;. She died in 1817 at the age of 42, having just begun to find fame as a novelist.
Jane Austen#65533;s life remains fairly opaque: she kept no diary that we know of, there is no voice recording such as we possess for Virginia Woolf and no photograph as there is of George Eliot. 160 Austen letters survive but none written earlier than her 20th year. In spite of this Carol Shields has written a wonderfully observant biography of this remarkable writer whose characters are as alive today in their longings as they were two hundred years ago, when Austen first gave them breath.

Shields, a Pulitzer Prize-winning novelist (The Stone Diaries) and devoted reader of Jane Austen, explores the family, private, and writing lives of the author of such beloved classics as Pride and Prejudice. Like Claire Tomalin (Jane Austen: A Life, LJ 1/98), she attempts to dispel the myth that Austen was oblivious to the world and its events. In chronicling her subject's life and personality, Shields emphasizes Austen's keen ability to listen, observe, and capture clearly the social mores of her time and explore human nature in her writing. Shields contends that historical references are behind many of the scenes and characters in Austen's novels, and as a way of more clearly personalizing Austen's experiences or feelings, she interjects commentary regarding writing and publishing that is presumably based on personal experience. These interjections tend to be a bit distracting but are fortunately brief and infrequent. This is a good introductory biography of Austen, but it lacks the interesting, intriguing, lively detail and scholarship of Tomalin's biography.ÄJeris Cassel, Rutgers Univ. Libs., New Brunswick, NJ (c) Copyright 2010. Library Journals LLC, a wholly owned subsidiary of Media Source, Inc. No redistribution permitted.

Penguin's wonderful series of "lives," biographies unique in their manageable length and careful pairing of subjects with authors who are themselves important creative figures, delights once again, this time with a pithy literary biography of Jane Austen by Pulitzer Prize-winning fiction writer Shields (The Stone Diaries; Dressing Up for the Carnival etc.). With frankness, warmth and grace, Shields writes of an "opaque" subject who lived a short life and about whom very little is known beyond family letters. "Jane Austen belongs to the nearly unreachable past," Shields notes. There is no diary, no photograph, no voice recording of her; her life was filled with lengthy "silences," notably a nearly 10-year "bewildering" period starting in 1800, when Austen, unmarried and in her mid-20s, moved with her family from rural Stevenson to the more urban Bath. This period also "drives a wedge between her first three major novels and her final three: Mansfield Park, Emma, and Persuasion" and suggests Austen's "reconciliation to the life she had been handed... in a day when to be married was the only form of independence." Shields is especially interested in the sisterly relations between Jane and the "subsuming," older Cassandra, as "each sister's life invaded the other, canceling out parts of the knowable self." The insularity evident in their letters to each other reveals something puzzling about Austen herself. She is relatively provincial and inexperienced in matters both social and sexual, yet conveys a "trenchant, knowing glance" throughout her novels. Shields seems to conclude that of the two sets of writingsÄthe private letters and the published novelsÄthe novels themselves offer the greater insight into Austen's artful imagination and shrewdly judgmental character. (Feb. 19) Forecast: Recent film versions of Austen's novels have revived public interest in this classic writer. With Shield's high-profile name also on the cover, sales should be strong and steady (c) Copyright PWxyz, LLC. All rights reserved

While many are familiar with Jane Austen's novels, the details of her life are less well known. In this addition to the Penguin Lives series, biographer Shields draws from Austen's witty letters and classic novels to combat the notion that Austen lived a placid, uneventful life. Raised in a large family by intelligent parents, Austen's creativity flourished. She and her siblings were known to put on plays, and she found a ready audience for her fiction in her family. Her writing developed from outrageously witty and satirical juvenilia to a subtle and graceful maturity in her novels. Meanwhile, Austen's life was anything but dull; balls, parties, broken or tragically ended engagements, and family scandals occupied Jane and sister Cassandra's time. Shields explores popular Austen stories, such as her attraction to and subsequent separation from an eligible bachelor and her 24-hour engagement to a different man. Although Shields suggests that Austen's unmarried state might have been a source of disappointment for her, Shields also shows how important Austen's literary successes were to her. A thoughtful introduction to an important and influential writer. --Kristine Huntley

An undistinguished addition to the list of recently published biographies of Jane Austen. In her attempt to examine the life of the ever-elusive Jane Austen, the novelist Shields (Dressing Up for the Carnival, p. 328, etc.) joins the ranks of well-known authors writing about other well-known individuals in the Penguin Lives series. The topic of Austen is well-traveled ground, of course, but Shields claims that her effort will be distinguished by her efforts to read what is implicit in Austens novels and history. The difficulty of reading what is implicit offers a pretty wide field for interpretation, and much of the writing here appears to be nothing more than hypothesis. The authors determination to turn to the novels as source material is understandable, since the task of any Austen biographer is bound to be a challenging one. Austen belongs to the nearly unreachable past: she left no formal portrait, no letters that were written before she reached 20, and she remained unknown in the literary sphere for most of her 42 years. Nevertheless, 160 of her letters survive (her beloved older sister, Cassandra, burned much of their correspondence after Janes death in an effort to protect her sisters memory), and very few are quoted by Shields. Instead, she runs through what well-known details there are of Austens life, moving more or less chronologically from her early years at the large family home in the countryside through her residence in Bath to her final years at Chawton Cottage. She makes what she can of Austens relationship with her close relations and friends, and she tries to imagine what Austens feelings might have been on the purchase and publication of her works. Reasons for Austens nine-year hiatus in the middle of her writing career are hazarded, but ultimately Shieldss guesswork feels no more insightful than any readers might be. Well-intentioned, but far from compelling.
More book reviews at iDreamBooks.com