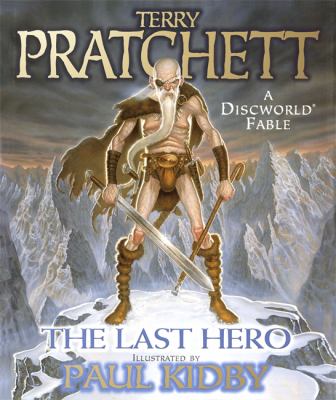 The last hero : a Discworld fable

He's been a legend in his own lifetime.
He can remember when a hero didn't have to worry about fences and lawyers and civilisation, and when people didn't tell you off for killing dragons.
But he can't always remember, these days, where he put his teeth . . .
So now, with his ancient sword and his new walking stick and his old friends -- and they're very old friends -- Cohen the Barbarian is going on one final quest. He's going to climb the highest mountain in the Discworld and meet his gods.
The last hero in the world is going to return what the first hero stole.
With a vengeance.
That'll mean the end of the world, if no one stops him in time.

'He can remember when a hero didn't have to worry about fences and lawyers and civilisation. He can remember when people didn't tell you off for killing dragons. But he can't always remember, these days, where he put his teeth... He's really not happy about that bit.' 'So now, with his ancient sword and his new walking stick and his old friends - and they're very old friends - Cohen the Barbarian is going on one final quest. It's been a good life. He's going to climb the highest mountain in the Discworld and meet his gods. He doesn't like the way they let men grow old and die.' 'It's time to give something back. The last hero in the world is going to return what the first hero stole. With a vengeance. That'll mean the end of the world, if no one stops him in time. Someone is going to try. So who knows who the last hero really is?'--BOOK JACKET

If you are wondering about the steep price tag for this 160-page book, rest assured that there is more to it than the tale of Cohen the Barbarian, a little long in the tooth but still ready to launch on one final adventure. This new Discworld title feature lots of four-color art. (c) Copyright 2010. Library Journals LLC, a wholly owned subsidiary of Media Source, Inc. No redistribution permitted.

Cohen the Barbarian, aka the Emperor Ghengiz Cohen, hero of 26 Discworld fables, and his Silver Horde go gentle into any good night? Never. Not even if they're held together by various elasticized supporters and forget where they left their false teeth. The gods unpardonably let Cohen and Co. succumb to old age, and the members of the Horde Boy Willie, Caleb, Truckle and Hamish, who's ("Whut?") stone deaf still want drink, treasure and women, even if they admit they've had to ease back on the last one. Cohen gets a bard to record their one last universe-defying hobble toward immortality, and old age has rarely been so gut-splittingly yet accurately portrayed here, embellished by Paul Kidby's wacky and wicked illustrations. The Horde's last quest is to return the fire Cohen stole long ago from Dunmanifestin, the gods' ultimate Good Address. Unfortunately, that will destroy the magic holding the world together, so Lord Vetinari of Ankh-Morpork "workshops" the situation ("the means by which people who don't know anything get together to pool their ignorance") and sends a dragon-powered vessel crewed by an inventor, a soldier, a wizard and an orangutan librarian to stop Cohen and his tottery Horde. Pratchett lets fly sly volleys at today's civilization and skewers nearly every barbarian-fantasy clich? rampant in too many books and films. This far-out farce rollicks along hilariously enough to make the inevitable aging process, if not palatable, at least worth a few good belly laughs. (Nov. 1) Forecast: You don't have to be a fantasy fan to appreciate the marvelous jacket art, depicting a skinny, bald, aged barbarian clutching a sword in one hand and a cane in the other. (c) Copyright PWxyz, LLC. All rights reserved

The end of the world is at hand again. But have, if not "no fear," then a good time! This is Discworld, after all, where the cosmos is about to go smash on a regular basis. Word reaches Ankh-Morpork that the last hero, ancient Cohen the Barbarian, and his decrepit Silver Horde are on their way to return what was stolen from the gods--that would be fire. Lord Vetinari, patrician of Ankh-Morpork, realizes--as heroes like Cohen, being charge-now-and-think-later-if-ever types, never do--that said return will mean the destruction of Dunmanifestin, the city of the gods on the mountain in the middle of the disc. That in turn would mean the negation of magic for two years, long enough for the universe to break down completely. Consulting the wizards of the Unseen University and genius artist-engineer Leonard da Quirm, Vetinari organizes an intervention involving a wooden airship powered by dragons belching flame when they see their reflections in a set of cleverly controlled mirrors. The ship flies off the edge of the disc and under it to fall toward Dunmanifestin from beneath. Pratchett cuts back and forth from Cohen's expedition to the rescue mission to command central in Ankh-Morpork in his customary manner, producing another Discworld delight that the 90 color illustrations the published book will sport should only bolster. --Ray Olson Young adult recommendations in this issue have been contributed by the Booklist staff and by reviewers Nancy Bent, GraceAnne DeCandido, John Charles, Patty Engelmann, Roberta Johnson, Shelley Mosley, Karen Simonetti, Candace Smith, Diana Tixier Herald, Linda Waddle, Beth Warrell, and Linda Zeilstra. Titles recommended for teens are marked with the following symbols: YA, for books of general YA interest; YA/C, for books with particular curriculum value; YA/L, for books with a limited teenage audience; YA/M, for books best suited to mature teens.

A new, albeit rather short, Discworld yarn (Thief of Time, 2001, etc.), profusely illustrated by popular Discworld artist Kidby in an oversized format. This time out, Cohen the Barbarian-he still swings a mean sword, but he's so old he needs a walking-stick, and can't always remember where he put his dentures-and assorted old friends (very old friends) plan to go out in a blaze of glory. None of them are happy about growing old, and who's to blame except the gods? So they plan to return-with interest-what the first hero, Mazda, stole from the gods long ago. If they succeed, of course, the Discworld's magical field will shut down and every living thing will die. So Lord Vetinari, ruler of the huge, rotting city Ankh-Morpork, puts together a team that, by a million-to-one shot, just might save the day: the great inventor and artist Leonard of Quirm, Captain Carrot of the City Watch, and Rincewind the incompetent wizard. Moderately funny, aimed primarily at Discworld addicts and holiday-season gift-givers. (90 full-color illustrations)
More book reviews at iDreamBooks.com