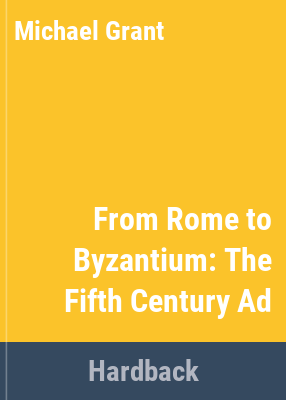 From Rome to Byzantium : the fifth century A.D. / Michael Grant.

Byzantium was dismissed by Gibbon, in the Decline and Fall of the Roman Empire,and his Victorian successors as a decadent, dark, oriental culture, given up to intrigue, forbidden pleasure and refined cruelty. This great empire, founded by Constantine as the seat of power in the East began to flourish in the fifth century AD, after the fall of Rome, yet its culture and history have been neglected by scholars in comparison to the privileging of interest in the Western and Roman Empire. Michael Grant's latest book aims to compensate for that neglect and to provide an insight into the nature of the Byzantine Empire in the fifth century; the prevalence of Christianity, the enormity and strangeness of the landscape of Asia Minor; and the history of invasion prior to the genesis of the empire.<br> Michael Grant's narrative is lucid and colourful as always, lavishly illustrated with photographs and maps. He successfully provides an examination of a comparatively unexplored area and constructs the history of an empire which rivals the former richness and diversity of a now fallen Rome.

Grant has long carved out a niche as the interpreter of Greco-Roman civilization for a popular audience, but his most recent work cannot be recommended even to general readers as an introduction to the century that witnessed the end of classical antiquity. Half of the book consists of long quotes taken from secondary sources; several are taken from Grant's previous book, The Fall of the Roman Empire (CH, Jun'76). Interspersed among the quotes is linking text that offers little explanation, so readers are denied the elegant narrative prose for which the author is well known. Sadly, the 12 short chapters do not add up to a coherent thesis of how the late Roman world gave way to early Byzantium. The bibliography reveals an inadequate command of the scholarship of the last generation and is scandalously out-of-date. Given the author's reputation as a numismatist, his discussion on monetary and fiscal history is shoddy. In describing architectural changes in Asia Minor, Grant offers insights gained from his long residence in Anatolia, but he omits treatment of the rich architectural and epigraphic record of Aphrodisias, one of the best preserved cities of late antiquity. In short, the book is disappointing; it is a rushed product from an author who is capable of far better. Those seeking an introduction to this crucial period are advised instead to purchase Averil Cameron's The Mediterranean World in Late Antiquity (1993). K. W. Harl Tulane University

The great popular classical historian (Greek and Roman Historians, 1995; Constantine the Great, 1994; etc.) here meditates briefly on the century that saw the death agony of the Roman Empire and the birth pangs of the ``new Rome'' of the East, a civilization that would persist, against great odds, for almost a thousand years. Since before the age of Constantine the Great (c. 272337 a.d.), the Roman Empire had been divided for administrative convenience into eastern and western halves. Constantine unified the empire, but his achievement was short-lived: After Theodosius I died, in 395 a.d., the two halves became permanently riven into eastern and western empires. The eastern empire, based in Constantine's old capital of Constantinople and held together by vigorous rulers, an all-powerful bureaucracy, and a vital citizen-army, repelled repeated barbarian invasions and gradually coalesced into the Byzantine Empire. Meanwhile, as Grant shows, the old locus of Roman imperium in the West quickly slid into desuetude: Alaric and his Visigoths sacked Rome in 410 a.d. Ganseric and the Vandals repeated this humiliation four decades later. By 476 a.d. petty principalities. Grant deftly sketches the distinctive cultural achievements of the early Byzantines in church architecture and in the visual arts; in literature, Grant points out, the Byzantines were not as accomplished as their western counterparts. In conclusion, Grant laments the sparse attention given the important eastern empire in historical scholarship and credits the Byzantines with the preservation of Western culture during Europe's Dark Ages. So brief as to seem superficial at points, Grant's study nonetheless is impressively erudite and characteristically well researched, and provides a fresh perspective on a century that was truly the best and worst of times. (44 b&w photos, 6 line drawings, not seen)
More book reviews at iDreamBooks.com