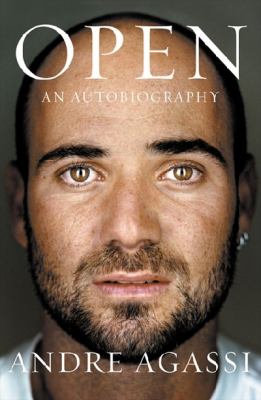 He is one of the most beloved athletes in history and one of the most gifted men ever to step onto a tennis court - but from early childhood Andre Agassi hated the game.

Agassi endured his father's rage-filled obsession to make him a tennis superstar. Actor/narrator Erik Davies's breathy, edge-of-the-seat delivery brings to life the near disaster of Agassi's childhood as well as his desire that his life could have been different. [Audio, LJ 3/15/10, starred review] (c) Copyright 2010. Library Journals LLC, a wholly owned subsidiary of Media Source, Inc. No redistribution permitted.

This book describes Agassi's life through his 2006 retirement from professional tennis. Agassi mentions that J. R. Moehringer actually wrote the book, based on recorded oral sessions. Agassi stresses what he considers his misfortunes--bullying by his father into intense tennis practice as a child on the court at his home in Las Vegas, life as a teenager at the Bollettieri Tennis Academy, painful and debilitating injuries during his playing career, an unhappy first marriage, a lifetime devoted to a sport he always hated. He is open about his alcohol and methamphetamine use and about lying to tennis association officials about drug use and to interviewers about his feelings regarding tennis in order to preserve his income and prestige. Open offers insights into the life of a professional athlete who reached the top of his profession; it includes the role of his support crew (trainer, coach, personal assistants). The book ends on a positive note, describing Agassi's marriage to former tennis champion Steffi Graf and establishment of a charter school for underprivileged children in Las Vegas. Though not useful as a scholarly resource, the book should provide interesting reading for Agassi fans and those intrigued by details of the lives of the rich and famous. Summing Up: Recommended. General readers. R. McGehee University of Texas at Austin

Agassi has always had a tortured look in his eyes on the tennis court. In 1992, when he burst onto the world sports stage by winning the Grand Slam at Wimbledon, he looked like a deer in headlights. Nobody seemed more surprised and upset by his big win that day than he did. For good reason, too. Agassi hated tennis. This is the biggest revelation in his very revealing autobiography. Agassi has hated tennis from early childhood, finding it extremely lonely out on the court. But he didn't have a choice about playing the game because his father drove him to become a champion, like it or not. Mike Agassi, a former Golden Gloves fighter who never made it professionally, decided that his son would become a champion tennis player. In militaristic fashion, Mike pushed seven-year-old Andre to practice relentlessly until the young boy was exhausted and in pain. He also arranged for Andre, age 13, to attend a tennis camp where he was expected to pull weeds and clean toilets. The culmination of all of this parental pushing came when Andre began winning as an adult. But it didn't make him happy. Within this framework, Agassi's other disclosures make sense. He had a troubled marriage to Brooke Shields that didn't last. He developed a drug problem that sabotaged his career. He was insecure about everything. Only when Andre met tennis star Steffi Graf (whom he eventually married) did things begin to change. Readers will definitely cheer when Andre finally makes peace with the game he once hated and learns to enjoy it.--Eberle, Jerry Copyright 2009 Booklist

Enigmatic tennis great Agassi lays it all on the line. Near the end of his beefy confession, the author excerpts one of the more famous passages from Walt Whitman's "Song of Myself": "Do I contradict myself? / Very well, then, I contradict myself." It's a powerful invocation that resonates well with the portrait unveiled here of the boy born with spondylolisthesis and racked with lower-back pain; the rebel who quit school at 14 but went on to found an academy for underprivileged children; the world-class player who won eight Grand Slam titles yet sometimes hated tennis because of his overbearing father ("Bad things happen when my father is upset. If he says I'm going to play tennis, if he says I'm going to be number one in the world, that it's my destiny, all I can do is nod and obey"); the champion who became, at age 33, the oldest player to be ranked No. 1. From a heart-wrenching childhood loss to a cheating Jeff Tarango to his last professional victory, a brutal five-setter against Marcos Baghdatis, Agassi's photographic recall of pivotal matches evokes the raw intensity of watching them from the stands. Lovers of the sport will also appreciate this window into the mind of a champion who lived and breathed his father's belief that "tennis is noncontact pugilism. It's violent, mano a mano, and the choice is as brutally simple as in any ring. Kill or be killed. Beat or take your beat-down." Those intrigued by Agassi's personal life will relish the accounts of his significant romantic liaisons, particularly his obsession with and eventual wooing of current wife, Steffi Graf, and his team mentality in building a close support network. An ace of a tale about how one man found his game. Copyright Kirkus Reviews, used with permission.
More book reviews at iDreamBooks.com