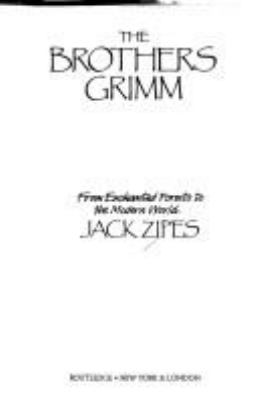 The Brothers Grimm From Enchanted Forests to the Modern World/ by Jack Zipes.

Most of the fairy tales that we grew up with we know thanks to the Brothers Grimm. Jack Zipes, one of our surest guides through the world of fairy tales and their criticism, takes us behind the romantic mythology of the wandering brothers. Bringing to bear his own critical expertise as well as new biographical information, Zipes examines the interaction between the Grimms' lives and their work. He reveals their personal struggle to overcome social prejudice and poverty, as well as their political efforts -- as scholars and civil servants -- toward unifying the German states. By deftly interweaving the social, political, and personal elements of their lives, Zipes rescues the Brothers Grimm from sentimental obscurity. No longer figures in a fairy tale, the Brothers Grimm emerge as powerful creators, real men who established the fairy tale as one of our great literary institutions. Part biography, part critical assessment, and part social history, The Brothers Grimm provides a complex and very real story about fairy tales and the modern world.

Zipes (University of Florida, Gainesville) is a prolific, often provocative, writer on fairy tales who has acquired a following among feminists and some folklorists. Originally nine independent essays, this newest book opens with a biography of Jacob and Wilhelm Grimm; subsequent chapters are devoted chiefly to the "socio-historical" contexts of their work and its reception. Zipes views the Grimms's compilation and reshaping of the tales as an act of "dialogue" with oral culture, meant to serve the causes of 19th-century bourgeois consciousness and a liberal German nationalism (as it was then) as well as the borthers' own inner psychological needs. Zipes's sympathetic approach to the Grimms and his broader view would make his book superior to the recent volumes by Ruth Bottigheimer (Grimms' Bad Girls and Bold Boys, CH, Feb '88) and Maria Tatar (The Hard Facts of the Grimms' Fairy Tales, CH, Apr '88) were he only a finer craftsman. His writing is marred by repetitions, barbarisms (e.g., "effect" for "affect" throughout), and at least one catastrophic lapse in proofreading. Several chapters promise much more than they deliver. The discussions here of recent German writing about fairy tales, however, should be essential reading for all scholars. Notes; index; copious and valuable bibliography. For graduate and undergraduate libraries. -M. Ury, University of California, Davis
More book reviews at iDreamBooks.com