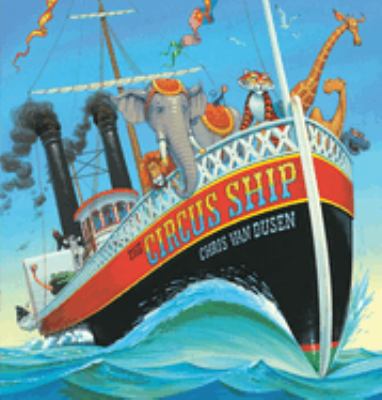 | Stories in rhyme -- Juvenile fiction | Children's stories -- Pictorial works -- Juvenile fiction | Circus performers -- Juvenile fiction | Maine -- Juvenile fictionGenre/Form: Stories in rhyme. | Humorous fiction. | Children's stories -- Pictorial works. | Children's humorous fiction. | Picture booksDDC classification: Picture Book Summary: When a circus ship runs aground off the coast of Maine, the poor animals are left on their own to swim the chilly waters. Staggering onto a nearby island, they soon win over the wary townspeople with their kind, courageous ways. So well do the critters blend in that when the greedy circus owner returns to claim them, villagers of all species conspire to outsmart the bloated blowhard.
Tags from this library: No tags from this library for this title. Log in to add tags.
Fiction notes: Click to open in new window

With stunning artwork and a rhyming text, the illustrator of the Mercy Watson books tells a tale of human-animal connection full of humor and heart.

When a circus ship runs aground off the coast of Maine, the poor animals are left on their own to swim the chilly waters. Staggering onto a nearby island, they soon win over the wary townspeople with their kind, courageous ways. So well do the critters blend in that when the greedy circus owner returns to claim them, villagers of all species conspire to outsmart the bloated blowhard. With buoyant rhymes and brilliantly caricatured illustrations evoking the early nineteenth century, Chris Van Dusen presents a hugely entertaining tale about the bonds of community -- and a rare hidden-pictures spread for eagle-eyed readers of all ages.

When a circus ship runs aground off the coast of Maine, the poor animals are left on their own to swim the chilly waters. Staggering onto a nearby island, they soon win over the wary townspeople with their kind, courageous ways. So well do the critters blend in that when the greedy circus owner returns to claim them, villagers of all species conspire to outsmart the bloated blowhard.

Mr. Paine, the greedy, mustachioed manager of a 19th-century circus, browbeats his ship's captain into sailing onward on a foggy night: "Don't stop! Keep going!/ I've got a show to do!/ Just get me down to Boston town/ tomorrow, sir, by two!" The ship crashes and sinks, but the animals swim to a small Maine island, where they confound the villagers until the tiger saves a girl from a fire. After that, the islanders help hide the animals when Mr. Paine returns for them. Van Dusen's (the Mercy Watson books) verse is tightly constructed, and his cartoonlike spreads are polished, literally and figuratively: the exaggerated chins and noses of the humans gleam, and sunsets and firelight illuminate the scenes dramatically. Other than Mr. Paine, readers don't get too close to any of the characters; the focus is on the action. The fantasy of African wildlife on a quiet Maine island will absorb a read-aloud audience, and a clever hide-and-seek page lets readers hunt for the animals, which are concealed from Mr. Paine. A final page supplies the story's (much sadder) historical source. Ages 4-8. (Sept.) © Copyright PWxyz, LLC. All rights reserved.

PreS-Gr 1-After their steamship en route to Boston is wrecked in a storm, a troupe of circus animals escapes bad treatment and disaster, finding its way to an island off the coast of Maine. The 1800s residents are surprised to find zebras eating their gardens and alligators lounging on woodpiles. Sympathies change when a tiger saves a toddler from a blazing shed. When a messenger announces that the cruel circus owner is returning to claim his menagerie, the citizens assist the animals in disguises and camouflage that confound him, leaving the friends to a peaceful coexistence. Van Dusen's rhymed text keeps a rollicking beat. His illustrations burst with color and energy and utilize perspective and texture to add drama and humor. Period details create a counterpoint with elements like a gorilla in a lifeboat. The spread of the animals in "hiding" is pure genius. The book honors the real circus animals that inspired this story.-Gay Lynn Van Vleck, Henrico County Library, Glen Allen, VA (c) Copyright 2010. Library Journals LLC, a wholly owned subsidiary of Media Source, Inc. No redistribution permitted.

Van Dusen, illustrator of Kate DiCamillo's Mercy Watson books, uses an actual 1836 shipwreck as the seed for this charming and humorous picture book about the fate of 15 circus creatures aboard a ship that hits a rock and sinks. The menagerie swims to an island, coexisting happily with the residents until the villainous circus owner appears to reclaim them. In an ingenious hide-and-find spread, the camouflaged animals elude the villain, who exits in a huff. The rhyming text provides the structure for the story; however, the vividly colored, meticulously drawn, cartoon-style illustrations articulate the story so well that they could practically stand on their own. Interesting perspectives and nuanced facial expressions clearly convey the drama of the story and emotions of the creatures, while panoramic views beautifully portray the steep coastal village. The final page features a brief author's note about the shipwreck that was the genesis for the story.--Enos, Randall Copyright 2009 Booklist

(Primary) The tiny kernel of a true story -- a circus ship disaster -- expands into a rollicking story in verse. Though the real 1836 wreck of The Royal Tar off the coast of Maine ended in tragedy, Van Dusen's story ends up a hilarious romp complete with a villainous circus owner, a courageous fire-leaping tiger, and clever animals camouflaged as humans. The super-saturated gouache paintings are filled with the kind of details kids will pore over. Perspective changes quickly: the animals on board looking worriedly at the fog take involuntary flight as the ship hits a ledge, and the next page shows a bird's-eye view of the animals "splashing and thrashing." As in a silent movie, high drama abounds -- all that's missing is the piano music and a damsel tied to a railroad track. Things turn comedic as the animals swim to shore and make themselves at home in a seaside town: "'There's a tiger in the tulips!' / 'There's a lion on the lawn!' / 'There's a python in the pantry!' / It went on and on and on..." With the cadence and excitement of the story-poems of Longfellow and the tongue-twisters of Mahy, this tall tale begs to be read aloud -- repeatedly. From HORN BOOK, (c) Copyright 2010. The Horn Book, Inc., a wholly owned subsidiary of Media Source, Inc. No redistribution permitted.

Van Dusen's rhyming text takes inspiration from an 1836 shipwreck, but fanciful fun, not tragedy, awaits readers here. The 15 animals aboard The Royal Star swim to an island off Maine after the ship runs aground and the circus's owner, Mr. Paine, abandons them. At first they shock villagers and run mischievously amok. A fire in a farm shedwith little Emma Rose Abbott inside!engenders a dramatic rescue by the tiger, whose skill in leaping through flames comes into play. Amusingly, animals and villagers collude to thwart Mr. Paine's attempt to reclaim his menagerie. The verse is sprightly, but the pictures are the true stunners. Bright, lampooning gouaches (familiar from the Mercy Watson series) and dizzying perspective perfectly suit this picaresque tale. The reprehensible Mr. Paine is an apoplectic giant striding into the placid village at sunset. Huge, leaping flames dramatize the tiger's riveting heroics. Children will pore over panoramic spreads that invite them to find each of the 15 animals and celebrate a denouement that serves up Mr. Paine's just deserts. Splendid! (author's note) (Picture book. 4-8) Copyright Kirkus Reviews, used with permission.
More book reviews at iDreamBooks.com