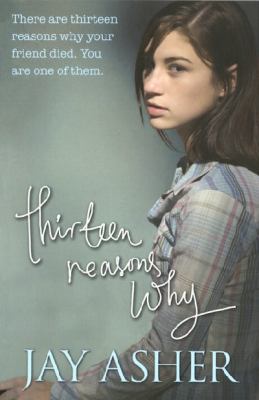 Genre/Form: Teen fiction.DDC classification: 813.6 Summary: Clay Jensen returns home to find a strange package with his name on it. Inside he discovers several cassette tapes recorded by Hannah Baker - his classmate and first love - who committed suicide two weeks earlier. On tape, Hannah explains that there are 13 reasons why she did what she did - and Clay is one of them.
List(s) this item appears in: TV and Movies
Tags from this library: No tags from this library for this title. Log in to add tags.
Fiction notes: Click to open in new window

You can't stop the future. You can't rewind the past. The only way to learn the secret . . . is to press play.

Clay Jensen returns home to find a strange package with his name on it. Inside he discovers several cassette tapes recorded by Hannah Baker - his classmate and first love - who committed suicide.

Hannah's voice explains there are thirteen reasons why she killed herself and Clay is one of them. If he listens, he'll find out why.

All through the night, Clay keeps listening - and what he discovers changes his life . . .

Bestselling US author Jay Asher had the idea for his debut young adult novel Thirteen Reasons Why at a museum. Whilst taking an audio tour, he was struck by the eeriness of the voice in his ear - a woman who described everything he was looking at but wasn't there. You can hear Hannah's tapes at hannahsreasons.blogspot.com.
%%%Read this sensational mystery bestseller before you watch the 13-part Netflix series, executive produced by Selena Gomez.
You can't stop the future. You can't rewind the past. The only way to learn the secret . . . is to press play.
Clay Jensen comes home from school to find outside his front door a mysterious box with his name on it. Inside he discovers a series of cassette tapes recorded by Hannah Baker - his classmate and crush. Only, she committed suicide two weeks earlier. On the first tape, Hannah explains that there are 13 reasons why she did what she did - and Clay is one of them. If he listens, Clay will find out how he got onto the list - what he hears will change his life forever.
Perfect for fans of The Fault In Our Stars and All the Bright Places .

Clay Jensen returns home to find a strange package with his name on it. Inside he discovers several cassette tapes recorded by Hannah Baker - his classmate and first love - who committed suicide two weeks earlier. On tape, Hannah explains that there are 13 reasons why she did what she did - and Clay is one of them.

This uncommonly polished debut opens on a riveting scenario: 13 teenagers in a small town have each been designated to listen, in secret, to a box of audiotapes recorded by their classmate Hannah and mailed on the very day she commits suicide. "I'm about to tell you the story of my life," she says. "More specifically, why my life ended. And if you're listening to these tapes, you're one of the reasons why." Clay, the narrator, receives the tapes a few weeks after the suicide (each listener must send the box to the next, and Hannah has built in a plan to make sure her posthumous directions are followed), and his initial shock turns to horror as he hears the dead girl implicate his friends and acquaintances in various acts of callousness, cruelty or crime. Asher expertly paces the narrative, splicing Hannah's tale with Clay's mounting anxiety and fear. Just what has he done? Readers won't be able to pull themselves away until that question gets answered-no matter that the premise is contrived and the plot details can be implausible. The author gets all the characters right, from the popular girl who wants to insure her status to the boy who rapes an unconscious girl at a party where the liquor flows too freely, and the veneer of authenticity suffices to hide the story's flaws. Asher knows how to entertain an audience; this book will leave readers eager to see what he does next. Ages 13-up. (Oct.) (c) Copyright PWxyz, LLC. All rights reserved

Gr 9 Up-With the arrival of a box of numbered audiocassettes, Clay Jensen's life changes forever. Listening and reacting to the words of fellow classmate and crush Hannah Baker, Clay begins to understand and to feel the depth of the pain, anger, and confusion that led to her suicide. With each recorded story, Hannah systematically lays bare the cruelty and deception of the 13 people whose actions she implicates in her decision to end her life. Alternating between Hannah's and Clay's voices, narrators Debra Wiseman and Joel Johnstone zero in on the indecision, angst, and desperate hunger for acceptance experienced by young adults struggling to find their place in the world. There are no heroes in this novel (Razorbill, 2007) by Jay Asher, and each character, including Hannah, is guilty of making poor choices. The pace of the story and the constant tension of wondering what will happen next make this an "edge of the seat" listening experience whose unanswered questions provide much food for thought and discussion.-Cindy Lombardo, Cleveland Public Library, OH (c) Copyright 2010. Library Journals LLC, a wholly owned subsidiary of Media Source, Inc. No redistribution permitted.

When Clay Jenson plays the casette tapes he received in a mysterious package, he's surprised to hear the voice of dead classmate Hannah Baker. He's one of 13 people who receive Hannah's story, which details the circumstances that led to her suicide. Clay spends the rest of the day and long into the night listening to Hannah's voice and going to the locations she wants him to visit. The text alternates, sometimes quickly, between Hannah's voice (italicized) and Clay's thoughts as he listens to her words, which illuminate betrayals and secrets that demonstrate the consequences of even small actions. Hannah, herself, is not free from guilt, her own inaction having played a part in an accidental auto death and a rape. The message about how we treat one another, although sometimes heavy, makes for compelling reading. Give this to fans of Gail Giles psychological thrillers.--Dobrez, Cindy Copyright 2007 Booklist

(High School) When high-school student Clay Jensen receives a mysterious package of seven cassettes, he is dumbfounded to discover they are from Hannah Baker, a classmate who committed suicide just two weeks earlier. Over the course of twenty-four hours, Jay attentively listens to Hannah's story as she identifies him as one of the thirteen reasons she chose to end her life. Narrators Johnstone and Wiseman impeccably interpret Clay's anxious musings and Hannah's unrelenting, bitter accusations in alternating monologues. The addition of an emotionally overwrought song provides a saccharine finale to a heretofore riveting study of the adolescent psyche. (c) Copyright 2010. The Horn Book, Inc., a wholly owned subsidiary of Media Source, Inc. No redistribution permitted. All rights reserved.

"Everything affects everything," declares Hannah Baker, who killed herself two weeks ago. After her death, Clay Jensen--who had a crush on Hannah--finds seven cassette tapes in a brown paper package on his doorstep. Listening to the tapes, Hannah chronicles her downward spiral and the 13 people who led her to make this horrific choice. Evincing the subtle--and not so subtle--cruelties of teen life, from rumors, to reputations, to rape, Hannah explains to her listeners that, "in the end, everything matters." Most of the novel quite literally takes place in Clay's head, as he listens to Hannah's voice pounding in his ears through his headphones, creating a very intimate feel for the reader as Hannah explains herself. Her pain is gut-wrenchingly palpable, and the reader is thrust face-first into a world where everything is related, an intricate yet brutal tapestry of events, people and places. Asher has created an entrancing character study and a riveting look into the psyche of someone who would make this unfortunate choice. A brilliant and mesmerizing debut from a gifted new author. (Fiction. YA) Copyright ©Kirkus Reviews, used with permission.
More book reviews at iDreamBooks.com