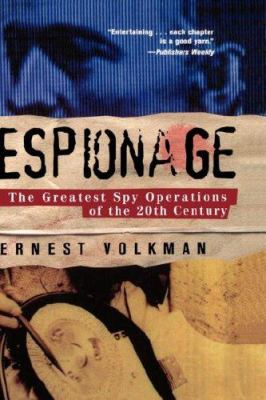 DISCOVER THE SPYING OPERATIONS THAT CHANGED THE COURSE OF HISTORY

Espionage expert Ernest Volkman goes behind the scenes of 20th-century history to uncover twenty-three incredible capers, con games, and subterfuges. Here are just a few:
* Windows shattered in Manhattan, shrapnel struck the Statue of Liberty, and the Brooklyn Bridge swayed when, in July of 1916, German saboteurs blew up the huge Black Tom munitions dump near Bayonne, New Jersey. The spectacular explosion galvanized public opinion against Germany and helped bring the United States into World War I.
* Japan's seizure of the Mandate Islands in the central Pacific triggered U.S. covert activities. Could the secret of Amelia Earhart's tragic final flight be connected to America's pre-war jitters?
* In the early 1920s, to ensure the survival of the fledgling Soviet state, Lenin used his personal intelligence service, CHEKA, to control anti-Bolshevik resistance. Enemies of the revolution were lured to their destruction through the ironically named Trust Operation.
* How were the Allies able to counter Hitler's deadliest weapons? For six years a mole inside Nazi Germany's scientific establishment betrayed the secrets of his country's classified military research to Britain's MI6.

This undemanding book of stories, about ten pages each, touches on some of the important, dramatic, and occasionally obscure spy stories of the century. Well, almostthey generally deal with the United States and World War II and Soviet/Cold War espionage. Sometimes the purple prose finds melodrama where it may not really exist: "It was, she thought, something very much like a high-wire act: one small slip and she would fall to her death." Lacking depth or original analysis, these taleswritten in a solid Boy's Life stylemake quick, pleasant but forgettable reading. Buy only where demand is great for books on espionage.H. Steck, SUNY at Cortland (c) Copyright 2010. Library Journals LLC, a wholly owned subsidiary of Media Source, Inc. No redistribution permitted.

This collection of espionage and intelligence stories will entertain a wide variety of readers. Each chapter is a good yarn, from the reconstruction of the ULTRA operation, in which the British solved German coded communications, giving the Allies advance warning of Hitler's military intentions, to the misbegotten OSS operation called Cornflakes, which sought to disrupt German morale with altered postage stamps (``a purely lunatic intelligence enterprise that used vast resources to accomplish absolutely nothing''). Other episodes include the Allied deception that convinced the Germans the Normandy landings were a feint, the intelligence disaster at Pearl Harbor, the story of the Walker family spy ring and the ``mole wars'' between the KGB and the CIA. Volkman (Warriors of the Night) offers a memorable depiction of Swedish diplomat Raoul Wallenberg, rescuer of Hungarian Jews from the Gestapo; the circumstances of his disappearance in 1945 remain a mystery despite the Russian archival material the author quotes regarding Wallenberg's death. Photos. (Sept.) (c) Copyright PWxyz, LLC. All rights reserved
More book reviews at iDreamBooks.com