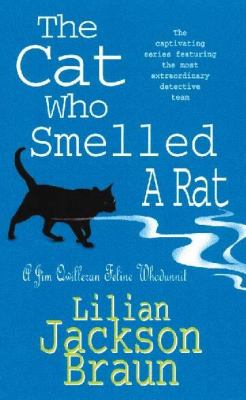 The cat who smelled a rat / Lilian Jackson Braun.

The Basic Series brings blockbuster bestsellers and new releases from bestselling authors to Large Print readers as close as possible to the regular print publication date. Monthly lists are selected to provide a diverse mix of genres, making this the ideal series to buy if you're only buying one.The residents of the town of Pickax in Moose County, 400 miles north of everywhere, are awaiting the Big One -- the three-day blizzard that heralds the arrival of winter. They're particularly anxious for it this year, since severe drought has turned the area into a virtual tinderbox. Philanthropist/journalist Jim Qwilleran, companion to the wily feline detectives Koko and Yum-Yum, has joined the volunteer fire patrol for a 24/7 watch on the historic mineshaft towers. When a firewathcher is shot, a sinister plot unfolds in this 23rd entry in Braun's bestselling series.

Drought is tormenting Moose County, whose residents are praying for snowfall before wildfires threaten historic mining structures and the town of Pickax itself. With a murderous arsonist loose, there's plenty to keep the whiskers of both Jim Qwilleran and his psychic Siamese cat, Koko, twitching. This 23rd installment in the "Cat Who" mystery series is thin on plot but as strong as ever on character development, which is fine since one of the chief delights of these books is what they reveal about Qwilleran and Moose County. This volume, for example, tells us that Qwilleran is a lyricist who secretly turns out catchy tunes that get Pickaxians tapping their toes. On the other hand, perhaps it's time to acknowledge that Pickax, despite its remoteness, is a dangerous place. With its minuscule population, the two or three murders that Braun chronicles there each year must give it a per capita homicide rate similar to Detroit's. But these tapes are still great fun, especially when narrated by the masterful George Guidall. Recommended. Kent Rasmussen, Thousand Oaks, CA (c) Copyright 2010. Library Journals LLC, a wholly owned subsidiary of Media Source, Inc. No redistribution permitted.

The 23rd entry in Braun's Cat Who... series (The Cat Who Robbed a Bank; The Cat Who Saw Stars; etc.) testifies to the amazing popularity of mysteries featuring cats. Once again philanthropist-journalist Jim Qwilleran, columnist for the Something, the local newspaper of Pickax City in Moose County, turns for crime-solving help to his insightful and sensitive Siamese sleuths, Koko and Yum Yum. It's late October and the residents of Pickax are praying for the Big One, the annual blizzard that ushers in the long winter. This year it is much needed since the extreme drought conditions have made the area a virtual tinderbox. After several fires break out, volunteers form the Citizens' Fire Watch to protect the historic shafthouses, all that remain of the county's once prosperous mines. Anxiety increases as more fires occur and a volunteer is shot dead at one of the shafthouses. When the president of the local curling club dies from a fall, Qwilleran, with a twitch of his moustache and an ear-splitting shriek from Koko, joins his feline assistants to find the rat responsible before snow flies. Regular fans will enjoy being back with old friends and will be intrigued by the eccentric new additions to Pickax. The complexities of small-town life and the feline antics portrayed with Braun's apt wit and humor combine with a puzzling mystery to make for a most welcome addition to the series. (Feb. 5) Forecast: With a solid bestseller track record for this series, this entry is sure to claw its way up the lists. British rights have been sold to Headline. (c) Copyright PWxyz, LLC. All rights reserved

Adult/High School-This delightful feline detective series continues with returning characters and introduces new residents of Pickax. It is the feline hero, KoKo, who realizes who is setting fires to the used bookstore and to the abandoned mines, causing deaths in the process. Unlike other cat series, such as those by Rita Mae Brown and Sharon Rousseau Murphy, KoKo and his mate, YumYum, remain typical cats accomplishing their sleuthing and giving hints with sniffs, yowls, placement of hairballs, and upset plants. Even their owner, Qwilleran, doesn't always understand what they are trying to tell him, but he is the one who sets the rattrap to unmask the villain in the dramatic climax. Braun provides an intricate detective story while portraying life in small-town America; everyone knows everyone, cares about them, is curious about them, and is eager to gossip about them, too. Purchase where the series is popular.-Claudia Moore, W. T. Woodson High School, Fairfax, VA (c) Copyright 2010. Library Journals LLC, a wholly owned subsidiary of Media Source, Inc. No redistribution permitted.

Back with her twenty-third "Cat Who . . ." mystery, Braun proves that her venerable series is far from getting stale. Jim "Qwill" Qwilleran is still enjoying life in the small town of Pickax in Moose County, "400 miles north of everywhere." Having moved into his winter residence, a condominium near his lady-love, head librarian Polly, the wealthy Qwill and his Siamese cats, Koko and Yum Yum, are awaiting the "Big One"--the first blizzard of the season. A drought has caused a series of fires in the abandoned mine shafts around Pickax--or is it arson? When a member of the citizens\q fire-watch patrol is killed, a sinister plot unfolds. Naturally, Qwill and Koko are on the case, the former feeling foreboding tingles in his luxuriant mustache, the latter delivering clues by destroying things in Qwill's condo. Once again, Braun displays her talent at all aspects of the cozy. In fact, the feelings produced by reading about Qwill and his pals can best be compared to that coziest of feelings--having a purring cat on your lap. --Jenny McLarin

While awaiting the Big One, the three-day blizzard that usually heralds the winter season up north of everywhere in Moose County, Jim Qwilleran, zillionaire newspaper columnist and companion to the two wiliest detectives who ever lived, Siamese cats Koko and Yum Yum, joins the volunteer fire patrol for its 24/7 protection of the areas historic mineshaft towers. In quick succession, another firewatcher is shot, a used bookstore left to Qwill burns, and a sports enthusiast, a curler, tripswith a little helpon the clubhouse stairs and dies. Meanwhile, a new tenant, a rare-book dealer with a surgically reconstructed face, has moved into Qwills condo complex; a saucy decorator and a lovely batik artist are arousing more of Qwills attention than his gal-pal Polly is comfortable with; and two town residents have left Pickax City in the dead of night, supposedly to elope, but actually to tattle on the mayor and slapdash builder Don Exbridge from a safe distance. Koko goes into full detective mode, yowling, pouncing, shredding, until Qwill finally takes heed and, after announcing the winners of his columns haiku contest, ties three aging bad boys into murder and an elaborate Ponzi scheme. Braun, who has virtually slapped a patent on writing about cats (this years The Cat Who Robbed a Bank and 22 others) cheerfully explains the arts of curling, batiking, and living the good, small-town life with cats who are smarter than you. All thats needed to make the meow mix perfect is more mystery and a modicum of suspense.
More book reviews at iDreamBooks.com