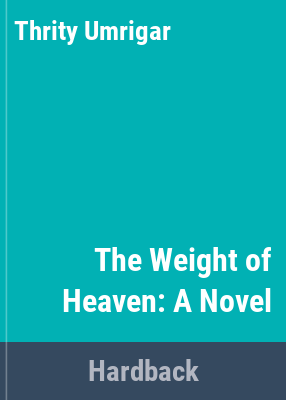 The weight of heaven : a novel / Thrity Umrigar.

"Powerful. . . . Twisty, brimming with dark humor and keen moral insight, The Weight of Heaven packs a wallop on both a literary and emotional level. . . . Umrigar . . . is a descriptive master." -- Christian Science Monitor

From Thrity Umrigar, bestselling author of The Space Between Us, comes The Weight of Heaven. In the rich tradition of the acclaimed works of Indian writers such as Rohinton Mistry, Akhil Sharma, Indra Sinha, and Jhumpa Lahiri, The Weight of Heaven is an emotionally charged story about unexpected death, unhealed wounds, and the price one father will pay to protect himself from pain and loss. Additionally, it offers unique perspectives, both Indian and American, on the fragmented nature of globalized India.

From the bestselling author of The Space Between Us comes an emotionally-charged story about unexpected death, unhealed wounds, and the price one father will pay to protect himself from pain and loss.

An emotionally-charged story about unexpected death, unhealed wounds, and the price one father will pay to protect himself from pain and loss.

Frank and Ellie are two attractive people who have basically led charmed lives. Frank's absent father notwithstanding, they each grew up in fairly secure surroundings and attended college and professional school, meeting and marrying and living in bliss. Suddenly, the world spins out of control when their seven-year-old son dies from meningitis. Soon afterward, they have an opportunity to make a work-related move to a seaside town in India, providing the panacea that will help them heal from their loss. As educated, liberal, progressive Americans, they cannot anticipate how they will react as they become part of the class struggle within Indian society; nor can they know how attached they will become to the son of their servants. Although it may be risky to latch on to bright young Ramesh, they convince themselves that they are helping the boy by providing him with things that his parents could never afford. Self-deception runs rampant, and Frank is eventually overcome by emotional turmoil, which leads him to make a fatal error in judgment. Umrigar (First Darling of the Morning) finely plumbs the depths of the human heart, from the heights of joy and passion to the very deepest despair. Recommended for all fiction collections.-Susanne Wells, P.L. of Cincinnati & Hamilton Cty. (c) Copyright 2010. Library Journals LLC, a wholly owned subsidiary of Media Source, Inc. No redistribution permitted.

Umrigar (The Space Between Us) continues her exploration of cultural divides in this beautifully written and incisive novel about an American couple's experience in India. Frank and Ellie Benton, grappling with the death of their seven-year-old son, move from Ann Arbor, Mich., to Girbaug, India, where Frank takes a job running a factory. While he tackles the barriers faced by an educated, wealthy American in charge of a Third World work force, Ellie, a psychologist, makes inroads with the impoverished locals at a health clinic. Frank has a difficult time adjusting at work, and at home he takes an interest in their housekeepers' son, Ramesh, and begins tutoring him. While Frank buries his grief by helping Ramesh, he ends up in competition with the boy's bitter father, Prakash, and further damaging his already troubled marriage. Umrigar digs into the effects of grief on a relationship and the many facets of culture clash-especially American capitalism's impact on a poor country-but it is the tale of how Frank's interest in Ramesh veers into obsession and comes to a devastating end that provides the gripping through line. Umrigar establishes herself as a singularly gifted storyteller. (Apr.) (c) Copyright PWxyz, LLC. All rights reserved

*Starred Review* In the years following the sudden death of their seven-year-old son, Benny, Michigan residents Frank and Ellie Benton have witnessed the steady deterioration of their marriage. So when Frank's boss offers him a position overseeing a company factory in the rural Indian city of Girbaug, Ellie convinces her husband it's just the change they both need. From the start, Ellie, a therapist, basks in her new life, making friends with townspeople and volunteering her services at a nearby clinic. But Frank's work brings endless grief. His company, Herbal Solutions, has taken over land containing trees that locals have long harvested for their medicinal properties. (One Girbaug resident is so despondent over his loss of income, he takes his own life.) Frank's world brightens when he befriends Ramesh, the charming, inquisitive son of the Bentons' housekeeper and cook. Ramesh soon becomes a surrogate for Benny in a relationship that simultaneously boosts Frank's spirits and breaks his heart. Umrigar (First Darling of the Morning, 2008) renders melancholy novels that resonate with rich prose and vibrant depictions of India, where she spent the first 21 years of her life before moving to the States. The Weight of Heaven is a bold, beautifully rendered tale of cultures that clash and coalesce.--Block, Allison Copyright 2009 Booklist

Sorrow turns to obsession when Ellie and Frank Benton move from Ann Arbor, Mich., to India shortly after the death of their seven-year-old son. Frank's employer, HerbalSolutions, harvests and manufactures a diabetes remedy in the village of Girbaug, and Frank, at Ellie's urging, is to run the plant. They are escaping from the empty bedroom their son once occupied, from the empty weekends they fill with long aimless drives, from the thousand memories they have of their happy boy, killed quickly by meningococcal fever. In India, Ellie and Frank find a reprieve from their heartache, but escape is hardly a cure. After a year and a half, Ellie loves India, has found a best friend in former journalist Nandita and a sense of purpose in working to improve the lives of the villagers. For Frank, though, India offers no simple salve. As the symbol of corporate America using up its natural resources, he deals with labor disputes, bribery and even the death of a union activist who was trying to improve conditions at HerbalSolutions. The only bright spot for Frank is Ramesh, young son of the Bentons' maid and cook. As Frank becomes increasingly attached to the boy, his father Prakash becomes jealous, irritated by the rich Westerner who can lure his son with expensive gifts, free time and promises of an American education. It is obvious to Ellie that Ramesh is a replacement for their dead son, but what she can't fathom is Frank's vitriolic attitude toward Prakash, and increasingly, all India. Umrigar's portrait of Frank's descent into obsessive madness is well paced, as are her descriptions of the couple's loneliness together, but the novel stumbles with two long flashbacksone describing Frank and Ellie's courtship and the other Benny's deaththat add little. By the end, Frank's preoccupation turns to wickedness and violence. Not as unified as Umrigar's previous novels (If Today Be Sweet, 2007, etc.), but an unflinching portrait of parental bereavement. Copyright Kirkus Reviews, used with permission.
More book reviews at iDreamBooks.com