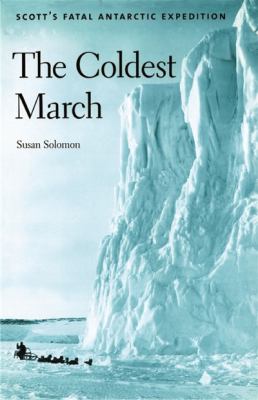 "This is a very well balanced and meticulously researched book. It shows beyond doubt how false and shallow have been the many malicious and blinkered books and ,lms in their bland condemnation of Captain Scott as a bumbler and inept leader. Quite the opposite was actually true, and The Coldest March goes a long way to putting polar history right and thereby to killing off the vicious myth about one of Britain s great explorers. Sir Ranulph Fiennes Had we lived, I should have had a tale to tell of the hardihood, endurance, and courage of my companions which would have stirred the heart of every Englishman. These rough notes and our dead bodies must tell the tale. Robert Falcon Scott, written after travelling for weeks in daily temperatures below -35 F. The Coldest March tells the tragic story of Captain Robert Falcon Scott and his British team who in November 1911 began a trek across the snows of Antarctica, striving to be the ,rst to reach the South Pole. After marching and skiing more than nine hundred miles, the men reached the Pole in January 1912, only to suffer the terrible realisation that a group of ,ve Norwegians had been there about a month earlier. Scott and his fo

In November 1911, Capt. Robert Falcon Scott and his British team set out to be the first to reach the South Pole. Battling the brutal weather of Antarctica, they reached the pole in January 1912 only to discover that a Norwegian team had beat them there by nearly a month. On their return from the Pole, Scott and four of his companions died in harsh conditions. Ever since, history has not known whether to label them heroes or bunglers. Solomon, senior scientist at the Aeronomy Laboratory, National Oceanic and Atmospheric Administration (Boulder, CO) and recipient of the U.S. National Medal of Science in 2001 for her insights into explaining the cause of the Antarctic ozone layer, analyzes all the factors present during Scott's expedition in an attempt to explain that his failure was due not to incompetence but to a combination of unpredictable weather, erroneous choices, and bad luck. She retells the story of the expedition bit by bit, inserting scientific facts concerning the climatology of Antarctica today and in 1912. Meticulously covering the minutest details, she paints a different but accurate picture of Captain Scott and his ill-fated expedition. An interesting read for anyone interested in true explorers; recommended for all libraries. Sandy Knowles, Henderson Cty. P.L., NC (c) Copyright 2010. Library Journals LLC, a wholly owned subsidiary of Media Source, Inc. No redistribution permitted.

British explorer Robert Scott's legacy has been debated since his ill-fated 1911 expedition. Initially pegged a hero, he's subsequently been maligned as a bumbler who lost the race to the South Pole and died, with four companions, because of his mistakes. Solomon, a senior scientist at the National Oceanographic and Atmospheric Administration, attempts to restore Scott's reputation, arguing that unnaturally cold weather (weeks of -35 F.), not poor judgment, caused the captain's demise. She traces the polar expedition (Scott's second) using modern scientific evidence and the explorers' diaries. In clear, well-paced prose, Solomon paints characters and landscape deftly and delivers well-conceived arguments. But the book is not without flaws. Each chapter has a forced, heavy-handed though sometimes amusing introduction featuring a fictional visitor to contemporary Antarctica. And while Solomon's arguments are plausible, they are not ironclad. To her contention that Scott's plans didn't work because of extreme weather, one might answer that he should have planned for any possible situation; his Norwegian rivals, for instance, took more than enough provisions. Still, whatever opinion readers have of Scott when they start the book, by the end he will have risen in their esteem. Solomon's exhaustive research provides readers with enough information to form their own opinion. B&w photos and illus. (Sept. 10) Forecast: This book should be popular among exploration buffs because of its new scientific information. The book could get lost among the many polar adventure tales, though Solomon's fluid, accessible writing, her five-city tour and events at the National Geographic Society and the Smithsonian may distinguish it from the crowd. (c) Copyright PWxyz, LLC. All rights reserved

Subtitled "Scott's Fatal Antarctic Expedition," this book is an investigation into the reasons why Scott's dash for the South Pole resulted in the deaths of all the expedition members. Solomon is a highly respected atmospheric scientist who brings a different perspective to her analysis of why the expedition failed. In 14 chapters, plus additional sections, the author traces the background and events leading up to and during the expedition. The volume is well adorned with a variety of maps, sketches, and graphs; indeed, there are some 71 figures. There are undoubtedly many reasons why Scott's party failed. However, Solomon's main thesis is that the party was traveling toward their supplies during an interval of unprecedented cold temperatures. Solomon analyzed the temperature data collected before, during, and after Scott's expedition and concludes that "only one year in three and a half decades has been as cold as 1912, confirming that such conditions are extremely unusual." These extremely low temperatures (10-15 degrees Celsius below normal) would have severely impacted travel, because at such low temperatures skis do not glide easily. The book deserves a place in libraries of all types. All levels. J. T. Andrews University of Colorado at Boulder

In November 1911, Captain Robert Falcon Scott led a British team of 31 men across the snows of Antarctica, striving to be the first to reach the South Pole. After marching and skiing more than 900 miles, Scott and four companions reached their goal in January 1912, only to find that five Norwegians headed by Roald Amundsen had been there almost a month earlier. On their return journey over the Ross Ice Shelf, Scott and his companions perished. Subsequent books portrayed Scott and his men as either heroes or inept bumblers. For this meticulously researched book, Solomon, a renowned atmospheric scientist who has made four trips to the Antarctic, studied the diaries and papers of Scott and his men. She has interwoven their stories with contemporary scientific data to present her view of their lives, characters, and reasons why some of them died. Solomon comes to the conclusion that Scott was a man of remarkable strengths and some stunning weaknesses, that he made some key blunders, and that he documented many of them with surprising frankness. --George Cohen

A painstaking, no-frills recreation of Robert Falcon Scott's South Pole bid, with a new perspective on the expedition's cruel fate, from NOAA senior scientist Solomon. It didn't take long for the memory of Scott to turn from one of honor to derision, from hero to bumbler-a leader so inept that it's a wonder that he made it to the Pole at all. No matter that the source of this image was generated in the backstabbing and beard-pulling world of envious scientists and explorers anxious to put down the work of a rival, it nonetheless stuck to Scott like grease from a seal-oil lamp. Out to set the record as straight as she can, and provide a complete picture of the expedition-balanced by short lead-ups to each chapter in the form of a contemporary Antarctic visitor narrating his experiences on a visit to the wondrous polar landscape-Solomon debunks the more outlandish accusations heaped on Scott: to the contrary, Scott's team's logistics were smart (if closely cut), and his leadership qualities were apparent most everywhere. More importantly, she suggests that Scott and his associates ran into a particularly nasty patch of weather (even by Antarctic standards) on their return from the Pole. That, plus some rotten luck when his boat got stuck in the ice, resulting in the team's late start. Solomon also demonstrates that it is more likely that dehydration, rather than scurvy, plagued the explorers, that Scott was not crippled by Victorian inhibitions preventing him from eating seal meat, and that the thin, high-altitude air of Antarctica also contributed to their weakening. There are also important portraits of the expedition members, lending a sense of how the team interwove their strengths and weaknesses. A compelling case for rescuing Scott from the Land of Ridicule. (photos from the expedition archives) Author tour
More book reviews at iDreamBooks.com