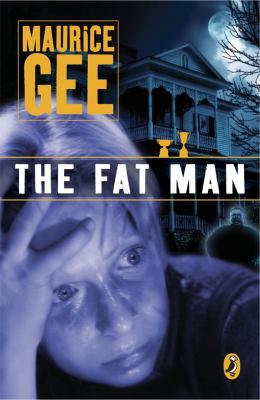 | New Zealand -- FictionGenre/Form: Young adult fiction, New Zealand.DDC classification: NZ823.2 Summary: In 1933, Herbert Muskie returns to his rundown hometown of Loomis, New Zealand, and uses a combination of cunning and psychological threats to take control of the lives of twelve-year-old Colin Potter and his family as part of a plan to get even for the mistreatment he suffered as a schoolboy. Suggested level: secondary.
Tags from this library: No tags from this library for this title. Log in to add tags.

When people like Herbert Muskie take up residence in your mind, there's nothing you can do to get them out.
Colin Potter is a skinny boy, hungry for chocolate. Herbert Muskie is enormously fat, hungry for revenge. A dramatic encounter down at the creek forges an unhappy alliance between the vindictive man and the fearful child.
But who is the fat man and why does he hate the people of Loomis? What guilty secrets are hidden in the past and why are Colin's parents such special targets?
A taut thriller from the award-winning author of The Fire-Raiser , Salt and Gool .
Also available as an eBook

In 1933, Herbert Muskie returns to his rundown hometown of Loomis, New Zealand, and uses a combination of cunning and psychological threats to take control of the lives of twelve-year-old Colin Potter and his family as part of a plan to get even for the mistreatment he suffered as a schoolboy. Suggested level: secondary.

In this seamlessly crafted psychological thriller, the sins of the father are visited on the son. Years ago, Herbert Muskie was tormented for being fat by young Colin Potter's father. Now, in the year 1933, bigger (and stronger) than ever, Herbertthe fat manhas come home to New Zealand to seek revenge. Caught in the act of stealing a candy bar from Herbert's rucksack, Colin is forcibly drafted into becoming an accomplice to Herbert's evil scheme: he methodically sets out to destroy anyone who has ever maligned him, including his own feeble-minded mother, siblings and in-laws, his new bride and his stepdaughter. Next in line are two of his old classmatesColin's mother and father. Gee (The Champion) gives the proverbial victim-turns-villain myth several spellbinding twists, and builds an aura of desperation around those hard hit by the Depression to make credible the psychic spell that a flush Herbert casts over the destitute town. Readers with a hearty appetite for the diabolic will get their fill here as Herbert breaks nearly every code of decency. But what is most fascinating about this horrific story is the author's ability to project Colin's pity for the evildoer. In a final chase scene, Colin catches a glimpse of the tormented fat boy beneath the fat man, and understands the cruelty he himself has suffered. Gee brilliantly allows readers to see the child within each adult, and to recognize the complexity of the consequences one's actions can yield. Ages 12-up. (Nov.) (c) Copyright PWxyz, LLC. All rights reserved

Gr 6 UpIn this engrossing psychological thriller, a devious man, embittered by the taunts he endured as a child, returns to his hometown to seek revenge on the family of one of his tormentors. (Nov.) (c) Copyright 2010. Library Journals LLC, a wholly owned subsidiary of Media Source, Inc. No redistribution permitted.

Gr. 8-10. Meet Herbert Muskie, a mysterious fat man who appears one day in Colin Potter's small New Zealand town. The year is 1933; times are hard, and Colin's father, Laurie, is out of work. When Muskie--who had been Laurie's schoolmate years before--offers him a job, it seems like a godsend. At first. In fact, the whole town seems to welcome the prosperous prodigal back from his years in America. But the more Colin learns about Herbert Muskie, the more menacing the fat man with the wormlike scar on his face becomes. What does he really want? What hold does he have over his stepdaughter, Verna, whom Colin befriends, and over Colin himself? A brilliant writer, Gee once again demonstrates his extraordinary talent for psychologically acute characterization. Mining Muskie's past, Gee makes the fat man's motivations for insinuating himself into the lives of Colin's family absolutely believable . . . and absolutely terrifying. Page by page, the tension builds to a climax that is at once horrifying and haunting. For mature readers, The Fat Man is a fascinating mixture of Saki and Alfred Hitchcock at their most artfully disturbing. (Reviewed December 15, 1997)0689811829Michael Cart

(Younger) A folklike story set in China tells of Mi Fei, an artist who skillfully paints the stories of gods and heroes on paper scrolls while living simply in his village, surrounded by loving neighbors. When alarming news comes that a great dragon has awakened from its hundred-years' sleep and is destroying the countryside, Mi Fei, at the villagers' behest, takes his scrolls and paints and journeys to the dragon's mountain. There, he encounters the fiery breath and lashing tail of the terrifying creature and learns that before the dragon can return to his slumber, someone must perform three tasks, or be devoured. Mi Fei is frightened, but clever, and he uses his beloved scrolls and his love for the people of his village to successfully complete the tasks. In the end, the gigantic dragon fades away until all that remains is a small paper version of himself. In an extraordinary feat of artistry, Sabuda uses the triple-page gate-fold illustrations both to relate the story in the style of Chinese scrolls and to capture the drama of the confrontation between the gentle artist and the awe-inspiring dragon. Each picture is cut from painted tissue paper created by Sabuda and placed on a background of handmade Japanese paper. The combination of the ever-increasing size of the dragon (climaxing in a picture of his teeth framing an entire spread) and the cleverness of Mi Fei creates a strong tale with plenty of action for the story-hour audience. h.b.z. Bob Graham Queenie, One of the Family; illus. by the author (Preschool, Younger) This warm family story begins on the opening endpapers as a bantam hen stands at the edge of a soft blue lake. Baby Caitlin and her mom and dad, walking in the countryside, soon spot the hen floundering in the lake, and Dad leaps in for a daring rescue. They warm the hen and bring her home, and "that might have been the end of the story...but it wasn't!" The hen, dubbed Queenie, soon becomes one of the family, taking over the dog's basket and witnessing Caitlin's first steps. But Caitlin's mom knows Queenie has another home, so the whole family sets off to return her to a nearby farm. "That might have been the end of the story...but it wasn't." Queenie returns each morning to lay a perfect brown egg in Bruno's basket, just right for Caitlin's breakfast or for baking a birthday cake. When a new baby arrives and Caitlin forgets to collect the eggs, Bruno hatches a litter of chicks. The immensely appealing animals and people are depicted in gentle watercolors with loose, comfortable lines. Th (c) Copyright 2010. The Horn Book, Inc., a wholly owned subsidiary of Media Source, Inc. No redistribution permitted.

In an ugly, menacing psycho-thriller set in Depression-era New Zealand, a man returns to his small town to repay the bullies who sent him fleeing 13 years before. Herbert Muskie appears suddenly in Loomis, with overflowing pockets, wild tales of rum-running in the US, and a new wife and stepdaughter. His outward geniality conceals a sadistic talent for cutting through people's defenses, and he quickly proves himself a master of both violent and subtle intimidation. Only a few months earlier, Colin Potter was terrorized into helping Muskie rob his senile mother of her life savings, but he doesn't dare tell his parents, who were among the man's tormentors years before. Gee (The Champion, 1993, etc.) tightens the screws expertly: Strong, cunning, and unbalanced, Muskie is thoroughly frightening and increasingly given to bursts of brutal irrationality. When he snatches his stepdaughter and Colin as hostages after police discover that he's been burglarizing houses in nearby Auckland, even hardened Cormier readers will stop breathing. Colin shows steel beneath his rabbity exterior, ``helping'' Muskie to his doom over a deep gorge, but even in death the fat man has his revenge, leaving nearly everyone he's touched damaged in some way. Sobering and scary. (Fiction. 12-15)
More book reviews at iDreamBooks.com