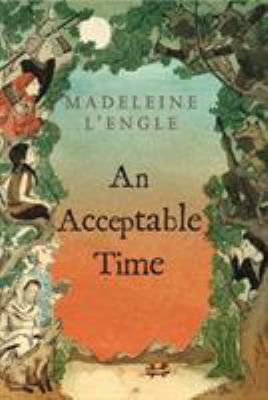 DDC classification: [Fic] Summary: Polly's stay with her grandparents in Connecticut becomes an extraordinary experience as she encounters old friends and mysterious strangers and finds herself traveling back in time to play a crucial role in a prehistoric confrontation.
Tags from this library: No tags from this library for this title. Log in to add tags.
Fiction notes: Click to open in new window

An Acceptable Time , the final book in Madeleine L'Engle's Time Quintet, the series that began with the Newbery Award winner A Wrinkle in Time. While spending time with her grandparents, Alex and Kate Murry, Polly O'Keefe wanders into a time 3,000 years before her own.

Under their feet, the ground seemed to tremble.

A flash of lightning, quivering ground, and, instead of her grandparents' farm, Polly sees mist and jagged mountains -- and coming toward her, a group of young men carrying spears.

Why has a time gate opened and dropped Polly into a world that existed 3,000 years ago? Will she be able to get back to the present before the time gate closes -- and leaves her to face a group of people who believe in human sacrifice?

Praise for An Acceptable Time :

"When Polly O'Keefe visits her grandparents in Connecticut, she finds herself caught up in the lives of three mysterious strangers [who lived] 3,000 years ago [and] travels back in time to play a crucial role in an ancient confrontation. . . L'Engle has again achieved the award-winning style of A Wrinkle in Time . . . Highly recommended." -- VOYA

A Wrinkle in Time: The GraphicNovel by Madeleine L'Engle; adapted & illustrated by HopeLarson: A graphic novel adaptation of Madeleine L'Engle's ground-breakingscience fiction and fantasy classic.

Intergalactic P.S. 3 by Madeleine L'Engle; illustrated by Hope Larson: Astandalone story set in the world of A Wrinkle in Time !

And Both Were Young

The Joys of Love

Includes an interview with the author and a genealogical table of the Murry-O'Keefe and Austin families and lists the books in which they appear.

Polly's stay with her grandparents in Connecticut becomes an extraordinary experience as she encounters old friends and mysterious strangers and finds herself traveling back in time to play a crucial role in a prehistoric confrontation.

For this time-slip novel, L'Engle again reaches into her bag of weird and wonderful knowledge, blending snippets of tantalizing information from a variety of disciplines--history, natural history, physics and Christian metaphysics, to name a few--into a rich and heady brew. Red-haired Polly O'Keefe (last seen in A House Like a Lotus ) arrives at her grandparents' farm in Connecticut for some private tutoring. There, in a landscape familiar to L'Engle fans (who will be pleased to know that the Nobel Prize-winning Mrs. Murry still cooks over a Bunsen burner), Polly slips back 3000 years into a different time ``spiral.'' She meets Anaral, a Native American girl; Karralys, a druid banished from Britain for his progressive thinking; and Tav, a handsome warrior who accompanied the druid to their new land. Polly travels back and forth between the two worlds, and eventually her purpose becomes clear: with the aid of her new friends she forges peace between two clashing tribes, and helps Zachary Gray (also from A House Like a Lotus ), a self-centered but very ill young man. The story is laced together with L'Engle's now-familiar theme of the transcendent importance of love. This fine fantasy, firmly rooted in reality, is the kind of thoughtful story at which L'Engle excels. Ages 12-up. (Oct.) (c) Copyright PWxyz, LLC. All rights reserved

Gr 6 Up-In the fifth title (Farrar, 1989) in Madeleine L'Engle's Time Quintet, Polly is visiting her scientist grandparents to recover from the death of a close friend. She becomes involved in a local retired bishop's adventures and is taken back in time 3,000 years to the world of druids, Native Americans, and ancient hostilities. The gate between the circles of time closes on Polly and Zach, who has serious health issues and hopes to find an ancient healer. The pace of the story is slow until Polly becomes an important member of the ancient community of the People of the Wind, a group whose successful agricultural settlement is raided by the people across the lake who suffer from a lack of rain and starvation. When Polly is mistaken for a goddess and must face death so that others might live, narrator Ann Marie Lee picks up the pace and suggests both the urgency of the situation and the strong feelings of the ancient people who have come to love Polly. There are many discussions about the role of science and religion, the meaning of the death of Jesus, and human sacrifice as a form of capital punishment. This adventure-fantasy also looks at friendship, death, and community from a theological point of view. Lee skillfully captures Polly's independent spirit, quizzical nature, and indignation at human cruelties.-Edith Ching, Washington Latin Public Charter School, DC (c) Copyright 2010. Library Journals LLC, a wholly owned subsidiary of Media Source, Inc. No redistribution permitted.

Fiction: F Age: 7-8 This fantasy time-slip adventure is meant to illuminate the Crucifixion, but it only succeeds in sounding like an intellectual religious tract. Polly, the heroine, is too good to be true, and the pretentious mix of high thinking, Ogam stones, druids, human sacrifice, and Mother goddesses does not carry conviction. For L'Engle fans only. Horn Rating: Marginal, seriously flawed, but with some redeeming quality. (c) Copyright 2010. The Horn Book, Inc., a wholly owned subsidiary of Media Source, Inc. No redistribution permitted.

Polly O'Keefe, back for another adventure, is called into the prehistory of the druids. Polly's first autumn at her grandparents' Connecticut country home is glorious and peaceful. But when she takes daily strolls as breaks from her studies, even openminded Polly is nonplussed by three people she spots--especially when she learns that they date from 3,000 years ago: exotic Anaral, majestic Karalys, and warrior Ta, who intrigues Polly as no other young man ever has. Soon she crosses the ""time gate"" into the pagan past, where she eventually takes part in a territorial dispute. Polly's friend Zachary, desperate for a cure for his heart disease, accompanies her and--once again in a L'Engle story--love's redemptive power sets crucial events in motion after Zach surrenders Polly to a blood sacrifice to secure his own healing. L'Engle is still an able practitioner of time travel, yet even she seems to be wearying of the many explanations and logical twists required for suspension of disbelief--and/or belief--and the ""tesseract."" Here, the conceptual feats aren't quite so original, invigorating, or accessible. But her storytelling skill (a blend of practiced writing and theological roving) will carry even nonbelievers along while--in her attempt to reconcile pagan with Christian belief--the notion that Christ existed long before the historical Jesus is superbly debated. Copyright ©Kirkus Reviews, used with permission.
More book reviews at iDreamBooks.com