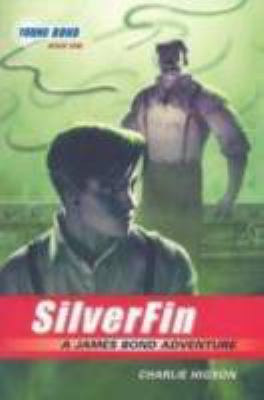 What does it take to become the greatest secret agent the world has ever known? In this thrilling prequel to the adventure of James Bond, 007, readers meet a young boy whose inquisitive mind and determination set him on a path that will someday take him across the globe, in pursuit of the most dangerous criminals of all time. Thirteen year-old James Bond cannot wait to get away from Eton, his stuffy boarding school, and visit his aunt and uncle in the Highlands of Scotland. Upon arriving, he learns that a local boy, Alfie Kelly, has gone missing. James teams up with the boy's cousin, Red, to investigate the disappearance. The clues lead them to the castle of Lord Hellebore, a madman with a thirst for power. Despite unknown dangers, James is determined to find the lost boy. But what he discovers in the dark basement of Hellebore's estate will forever change his life.

This prequel to the adventures of James Bond, 007, introduces us to the young James when he's just started boarding school in England and is about to become involved in his first adventure. Suggested level: secondary.

Boasting 12 novels and 22 films, the Bond legacy continues to expand with Ian Fleming Publications authorizing the original "Young Bond" series of YA novels. In this adaptation of the first novel, we meet the 14-year-old newbie at Eton, bullied by a swaggery Yank kid who inevitably recalls Draco Malfoy. But young George Hellbore's only under the thumb of his truly malevolent dad, Lord Hellbore, who lives in a moat-ringed castle. As James makes friends and trains to improve his physical prowess-the better to keep George out of his hair-he learns that a local lad has disappeared near the castle. So against all reasonable advice, our future spy is off to find out what Hellbore has done with the missing kid. VERDICT While the components and characters in this adventure offer few surprises, including a pretty young woman avatar for the older Bond's harem, Walker's excellent, semirealistic color art offers limpid menace. More generally, the equally excellent pacing and storytelling as well as the nicely written dialog elevate this into a captivating read that will appeal to adults and teens.-M.C. (c) Copyright 2010. Library Journals LLC, a wholly owned subsidiary of Media Source, Inc. No redistribution permitted.

Unlike its grown-up hero, this first installment in the Young Bond series commissioned by Ian Fleming's estate, is not quite sure what it wants to be. The opener feels just like one for the adult 007, with a spine-tingling scene of a boy grappling with eels and a human (or is it?) eel-like entity. But then the book shifts into a standard English boarding school tale, set in Great Britain between the world wars. Readers follow 13-year-old James through his initiation at Eton and observe him at running and swimming practice where he develops skills that come in handy 200 pages later. The teen bests a bully George Hellebore in a cross-country race, making a mortal enemy of him. Then James is off to Scotland to visit his aunt and Uncle Max, an ex-spy himself. Who should turn up but George, whose father has inherited a nearby castle. Lord Hellebore is an arms merchant with tight security around his property, situated on Loch SilverFin, named for a vicious creature from Scottish lore. When a local boy goes fishing there and never returns (the one from the opening scene), James sneaks in to investigate. Higson's (Getting Rid of Mister Kitchen) pace quickens as the hero wriggles out of one brush with death after another. Many not-for-the-squeamish moments will likely appeal to middle-grade boys. Sadly, there's no hint of the bon vivant James later becomes, but there is a blond, green-eyed beauty named Wilder Lawless who comes to his rescue on horseback. The steed's name? Martini. Ages 10-up. (Apr.) (c) Copyright PWxyz, LLC. All rights reserved

Gr 6-9-The first of a projected series sanctioned by the Ian Fleming estate finds young James at Eton. It's the 1930's and memories of World War I intrude often as James finds a place among friends but attracts the unwanted attention of an older American boy and his very rich father, a Scots lord. Lord Hellebore and his son are bullies with over-the-top ambition for success at all costs. When the term ends, James heads north to his Uncle Max's cottage in Scotland where his Aunt, who has raised him since his parents' death in a climbing accident, has gone to care for her dying brother. The discovery that the frightening Lord Hellbore is the local laird comes just as James meets a cockney boy named Red Kelly who has stowed away on the train, off to help locate his young cousin, Alfie, who has gone missing near the laird's estate at Loch Silver Fin. James and Red team up to solve the mystery of Alfie's disappearance. James's leadership skills are apparent as he recruits a local girl and even young George Hellebore in his quest to undo the vile experiments occurring at the laird's castle. Charlie Higson's novel (Miramax Books, 2005) is skillfully and dramatically read by Nathaniel Parker, who gives every character a distinct voice. Fans of James Bond movies as well as Anthony Horowitz's Alex Rider books will be eager to listen to this fine spy thriller.-Jane P. Fenn, Corning-Painted Post West High (c) Copyright 2010. Library Journals LLC, a wholly owned subsidiary of Media Source, Inc. No redistribution permitted.

Gr. 5-8. The name's the same--Bond, James Bond. But the face is different. And no wonder: the late Ian Fleming's fabled superspy is only 14 years old in this newly launched, lavishly promoted, high-concept series. Higson struggles heroically to incorporate all Fleming's trademark ingredients. There's a ravishing heroine (who rides a horse named Martini); a larger-than-life villain (a wealthy American with large, flashing white teeth who is mad, I tell you, mad ); and lots of melodramatic nonsense about eels and eugenics. The problem is that young Bond is a bit of a cipher, and the story takes forever to get going. Then once things heat up, they go on too long and, worse, too predictably. Part of the problem is endemic to all new series: the need to establish characters, background, etc. But one hopes that Higson will give more attention, in future volumes, to fresher plotting and fleshing out the character of his hero. --Michael Cart Copyright 2005 Booklist

Expanding the franchise to James Bond's boyhood, Higson describes the thirteen-year-old's first semester at Eton and a summer adventure stopping a mad scientist from engineering superhumans. The first and second halves of the book don't really match, some preachy passages distract, and several plot points strain credibility, but fans will enjoy hints of the future Bond and the boy-friendly action. (c) Copyright 2010. The Horn Book, Inc., a wholly owned subsidiary of Media Source, Inc. No redistribution permitted. All rights reserved.

Higson sets his story in the 1930s as a young James Bond (only 14) embarks on a quest to solve the mystery of the missing Alphie Kelly. While at a boarding school in Eton, Bond first encounters George Hellebore and eventually his evil, overbearing, father. During a holiday trip to his aunt's home in northern Scotland, Bond's and Hellebore's lives become intertwined when Bond begins to suspect that something very suspicious is going on behind the gates of the Hellebore compound. Many coincidences and fortunate encounters (and some unfortunate ones) lead Bond inside the compound and to heart-pounding scenes that will keep readers turning the pages. At times, the episodes, with key characters being spotted just by chance, seem contrived, but those pass by quickly as the action moves beyond the ordinary into the action. A great read for fans of detective tales. (Fiction. 10-15) Copyright ©Kirkus Reviews, used with permission.
More book reviews at iDreamBooks.com