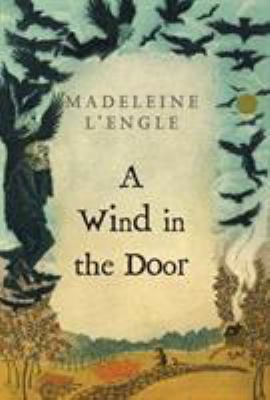 A wind in the door / Madeleine L'Engle.

Genre/Form: Fantasy -- Juvenile fiction.Summary: With Meg Murry's help, the dragons her six-year-old brother saw in the vegetable garden play an important part in his struggle between life and death.
Tags from this library: No tags from this library for this title. Log in to add tags.
Fiction notes: Click to open in new window

The second book in Madeleine L'Engle's A Wrinkle in Time Quintet. When Charles Wallace falls ill, Meg, Calvin, and their teacher, Mr. Jenkins, must travel inside C.W. to make him well, and save the universe from the evil Echthros.

Every time a star goes out, another Echthros has won a battle.

It is November. When Meg comes home from school, Charles Wallace tells her he saw dragons in the twin's vegetable garden. That night Meg, Calvin and C.W. go to the vegetable garden to meet the Teacher (Blajeny) who explains that what they are seeing isn't a dragon at all, but a cherubim named Proginoskes. It turns out that C.W. is ill and that Blajeny and Proginoskes are there to make him well - by making him well, they will keep the balance of the universe in check and save it from theevil Echthros.

Meg, Calvin and Mr. Jenkins (grade school principal) must travel inside C.W. to have this battle and save Charles' life as well as the balance of the universe.

Praise for A Wind in the Door:

"Complex concepts of space and time are handled well for young readers, and the author creates a suspenseful, life-and-death drama that is believably of cosmic significance. Complex and rich in mystical religious insights, this is breathtaking entertainment." -- School Library Journal , starred review

Intergalactic P.S. 3 by Madeleine L'Engle; illustrated by Hope Larson: Visit the world of A Wrinkle in Time in this standalone story!

And Both Were Young

The Joys of Love

With Meg Murry's help, the dragons her six-year-old brother saw in the vegetable garden play an important part in his struggle between life and death.

Sequel to : A wrinkle in time / Precedes : A swiftly tilting planet.

Gr 5-9-The 50th anniversary of the publication of Madeleine L'Engle's Newbery award-winner, A Wrinkle in Time (Farrar, 1962), has spurred the rerecording of her science fiction/fantasies. Highly praised, A Wrinkle in Time launched what became a succession of books with intergalactic, intracellular, and time travels featuring socially-challenged Meg Murry, her younger brother Charles Wallace, and friend Calvin O'Keefe, who later became Meg's husband. In Wrinkle, they rescue Meg's physicist dad from the clutches of "It"-a mind-controlling entity. A Wind in the Door (Square Fish, pap. 2007) has Meg, Calvin, and fantastical creatures slipping into the mitochondria of a very-ill Charles Wallace. In A Swiftly Tilting Planet (Square Fish, pap. 2007), a teenaged Charles Wallace transcends time and danger to alter history so the world is no longer threatened by a belligerent dictator. Though Calvin is out of town, Charles is assisted by a grown, pregnant Meg through mind-to-mind flow. Though written decades ago, all three novels connect with current headlines on bullying, societal conformity, dangerous microorganisms, and potential threats of nuclear aggression. After an introduction spoken by L'Engle, Hope Davis narrates A Wrinkle in Time with careful intensity. Narrator Jennifer Ehle brings verve and emotional clarity to the other two titles. The sound quality is excellent. While some listeners who have enjoyed these titles originally read by L'Engle may miss the author's interpretation of her text, they will find that Davis and Ehle add youthful energy to these works. L'Engle's modern classics are school and public library standards, and these new recordings are a very good way to fill in any gaps.-Barbara Wysocki, Cora J. Belden Library, Rocky Hill, CT (c) Copyright 2012. Library Journals LLC, a wholly owned subsidiary of Media Source, Inc. No redistribution permitted.
More book reviews at iDreamBooks.com