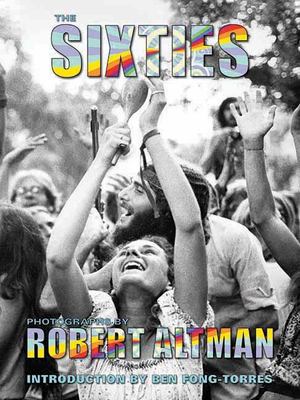 The sixties / photographs by Robert Altman ; introduction by Ben Fong-Torres.

Those nostalgic for the free love era will revel in this handsome, oversized collection of gritty photographs by celebrated photographer Altman. A master at catching his subjects at the moment of emotional overload-whether they be mischief makers, war protestors or musicians-the black and white photographs collected here are pure nostalgia, making a powerful you-are-there impression that simultaneously highlights the era?s distance-chronologically and otherwise-from the current moment. In addition to period luminaries like Ken Kesey, Jerry Garcia, Janis Joplin and Mick Jagger, the compendium highlights lesser-known players on the scene, as well as average attendees at rallies, "be-ins" and festivals. Altman?s particular genius is best showcased in his legendary crowd scenes; what these photos occasionally lack in technical precision, they more than make up in the raw, wild feelings they?ve miraculously captured. Despite the book?s title, images straddle the period from the late 60?s to the early 70?s (though none of the subjects seem to make much of the distinction), and a fun introduction by longtime Rolling Stone editor Fong-Torres reveals that Altman has always felt his purpose was to depict "the life and times that the Sixties inspired"; he succeeds beautifully with this, an impressive social document and a powerful remembrance. (Oct.) Copyright 2007 Reed Business Information.
More book reviews at iDreamBooks.com