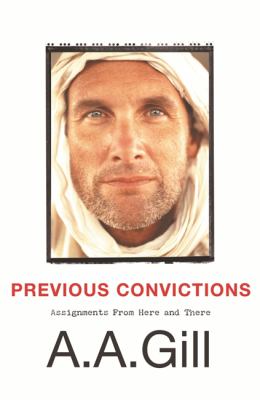 Previous convictions : assignments from here and there / A.A. Gill.

A.A. Gill is probably the most read columnist in Britain. Every weekend he entertains readers of the Sunday Times with his biting observations on television and his unsparing, deeply knowledgeable restaurant reviews. Even those who want to hate him agree: A. A. Gill is hopelessly, painfully funny. He is one of a tiny band of must-read journalists and it is always a disappointment when the words 'A. A. Gill is Away' appear at the foot of his column. This second book is a further collection of those absences; 22 travel pieces and essays on other subjects that belie his reputation as a mere style journalist and master of vitriol. This is writing of the highest quality and ambition.

In this boisterous, profane and unfortunately lopsided travelogue, British author and columnist Gill (The Angry Island) unleashes caustic opinions from 32 spots, both "Here" (the UK) and "There" (everywhere else). From Haiti to Oman, Brazil to Vietnam, Gill's vivid, vigorous prose--especially in his uproarious verb choices--enchants and enthralls. The author's powers of description are also keen, transporting readers to the "brilliant, benighted, argumentative, inspiring" Calcutta, as well as the "stamped on, bitten, battered and clawed" post-war Baghdad. At times Gill becomes preachy ("Travel should question, not confirm"), and occasionally offensive ("What's in it for female suicide bombers? The promise of seventy adolescent virgin blokes[?]"), but he also educates from the less-traveled corners of the world (Pakistan, Sudan, Greenland and others), albeit with a guilty sense of awareness. As a whole, Gill is far more interesting when reporting from "There," demanding careful attention from an international audience; dispatches from "Here," though they may appeal to a British audience, don't quite measure up. (July) Copyright 2008 Reed Business Information.
More book reviews at iDreamBooks.com