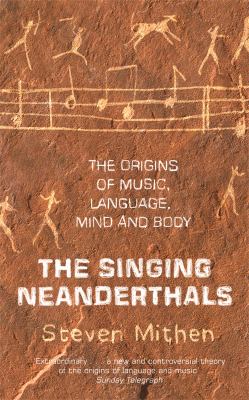 The singing Neanderthals : the origins of music, language, mind and body / Steven Mithen.

A fascinating and incisive examination of our language instinct from award-winning science writer Steven Mithen.

Along with the concepts of consciousness and intelligence, our capacity for language sits right at the core of what makes us human. But while the evolutionary origins of language have provoked speculation and impassioned debate, music has been neglected if not ignored. Like language it is a universal feature of human culture, one that is a permanent fixture in our daily lives.

In THE SINGING NEANDERTHALS, Steven Mithen redresses the balance, drawing on a huge range of sources, from neurological case studies through child psychology and the communication systems of non-human primates to the latest paleoarchaeological evidence.

The result is a fascinating and provocative work and a succinct riposte to those, like Steven Pinker, who have dismissed music as a functionless and unimportant evolutionary byproduct.