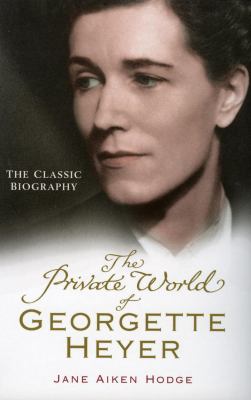 As an internationally bestselling phenomenon and queen of the Regency Romance, Georgette Heyer is one of the most beloved historical novelists of our time. She's written more than fifty novels - romances, detective stories and contemporary works of fiction - yet her private life was practically inaccessible to any but her closest friends and relatives.

With this classic biography we catch a glimpse into Georgette Heyer's world and that of her most memorable characters. With access to private papers and archives, Jane Aiken Hodge reveals a formidable, energetic woman, with an impeccable sense of style and, beyond everything, a love for all things Regency.

Lavishly illustrated from Georgette Heyer's own research files, her family archives and other Regency sources, complete with extracts from her correspondence and references to her work, The Private World is a delight and a must-read for every Georgette Heyer fan.

First published in 1984 by The Bodley Head Ltd.

In a competent and thorough portrait of the writer at work (first published in the U.K. in 1984), Hodge covers the life of Georgette Heyer (1902-1974), a bestselling but intensely private author of historical romance novels. Through a close reading of the British writer's oeuvre and voluminous correspondence with publishers as well as interviews with friends and family, an image emerges of a shy, stylish but formidable woman who "loathed pretentiousness, hypocrisy, and self-deception," was a stickler for manners, morals, and historical accuracy, and who admired and emulated Jane Austen's unromantic, ironic style. Her career was launched when she was only 19 with the successful publication of The Black Moth, and Heyer became the breadwinner for her mother and two younger brothers after the early death of her father as well as the chief wage earner in her long, happy marriage to barrister Ronald Rougier. If her books never received critical acclaim during her lifetime, says Hodge, her elegant romantic comedy had fans among dons, lawyers, high-powered businessmen, and critics and novelists like A.S. Byatt. This book may entice readers to explore Heyer's novels (some of which have been reissued by Sourcebooks). Illus. (Aug.) (c) Copyright PWxyz, LLC. All rights reserved.

Georgette Heyer (1902-74) would have hated writing in the twenty-first century. Blogging, chatting, tweeting would all be foreign concepts to her. Even in the latter twentieth century, she refused to go on book tours, declined all offers for interviews, and answered only the mail from her fans she considered worthy of her time. Yet despite intense aversion to promoting her work, Heyer, who wrote more than 50 novels, was a commercial success generally acknowledged to have created the Regency romance. Hodge, author of her own share of romance novels, delves into the private life of Mrs. Ronald Rougier, as Heyer was known in the real world, to offer readers not only a vivid, fascinating account of her life but also an insightful critique of the writer and the books. Originally published in Great Britain in 1984, Hodge's biography is finally being published in the U.S., and the lively and entertaining book is a must-read for fans of Heyer's work and anyone else interested in the origins of the Regency romance.--Charles, Joh. Copyright 2010 Booklist
More book reviews at iDreamBooks.com