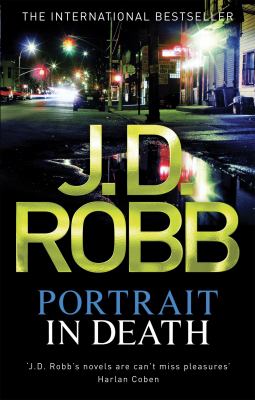 DDC classification: 813.6 Summary: After a tip from a reporter, Eve Dallas finds the body of a young woman in a Dumpster on Delancey Street.
Tags from this library: No tags from this library for this title. Log in to add tags.
Fiction notes: Click to open in new window
Total holds: 0

<p> Her face was young and pretty, lips and cheeks rosy. 'She's dead isn't she? In this picture, she's already dead' </p> <p>New York's top reporter is sent a glamorous portfolio - a beautiful girl in the prime of her life. But the camera lies. A closer look shows the girl's lifeless body held up by wires and clever lighting: immortalised and horrifying.</p> <p>As the killer plucks more young people from their lives, Lieutenant Eve Dallas tries desperately to find a link. Trusting her instincts and her billionaire husband's shady past, Eve confronts the mounting panic.</p> <p>But when a killer is consumed by a passionate madness, time is short . . .</p>

After a tip from a reporter, Eve Dallas finds the body of a young woman in a Dumpster on Delancey Street.

It's the year 2059, and Lt. Eve Dallas is tracking another serial killer in New York City-this time a photographer with an eye for the pure and innocent. Eve is serious and focused in her quest for justice, but humor is added throughout by her precocious sidekick, Peabody, and by their loose grasp of history: Who were Ansel Adams and Mathew Brady and why would rising young photographers take these odd noms de plume anyway? Together, Eve and Peabody trace the killer through the student culture of Columbia University and the Juilliard School. Meanwhile, Eve's Irish husband, Roarke, learns disturbing information about his past that has him lashing out at the people who love him most. Susan Ericksen has established voices that mirror the quirks of the recurring characters: Eve's impatience with anything that gets in the way of her case, Peabody's curiosity about everything in work and life, and Roarke's anger at having his ideas challenged. Highly recommended.-Juleigh Muirhead Clark, John D. Rockefeller Jr. Lib., Colonial Williamsburg Fdn., VA (c) Copyright 2010. Library Journals LLC, a wholly owned subsidiary of Media Source, Inc. No redistribution permitted.

Lieutenant Eve Dallas may live in 2059, but she's still a recognizable Manhattan police officer: mouthy, courageous, skeptical and impatient. In Roberts's latest In Death novel (after Purity in Death), she's charged with finding a killer who murders young people full of innocence and promise, photographs them after death, then taunts both a top reporter and Dallas herself with notes about his handiwork. Just as her investigation of Manhattan's clubs and colleges nears its peak, Eve's husband, the wealthy entrepreneur Roarke, discovers that his mother is not the cold abandoner he remembers, but a tender young Irishwoman whom his father brutally murdered. While he struggles to understand his heritage, the couple must navigate stormy marital waters. Though the mystery's denouement doesn't live up to its promise, the book ably delivers on other fronts. Intensely female yet unfeminine in any traditional sense, Dallas has a complex edge that transcends genre stereotypes and gives the book's romantic interludes a real charge. As always in Roberts's work, appealing secondary characters add genuine warmth and humor. And while this futuristic vision of New York may not be totally accurate (it's unlikely, for example, that Dallas's oft-used "bite me" will still be in vogue 50 years from now), it's perfectly calibrated to intrigue. (Mar. 4) Forecast: There should be no surprises here. Like its predecessors, this Robb novel will head straight to the top of the bestseller charts. (c) Copyright PWxyz, LLC. All rights reserved
More book reviews at iDreamBooks.com