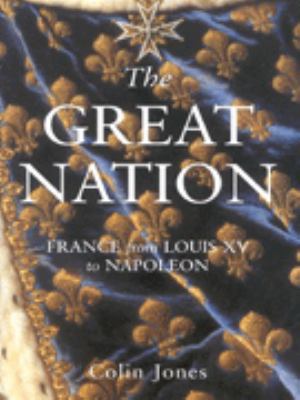 This eminently readable political history of 18th-century France aims to revise the traditional interpretation of the ancien regime. British historian Jones defiantly eschews this term, arguing that historians' preoccupation with the revolution has caused them to ignore the real vitality and achievements of France from 1715 to the revolution. The 18th century, he reminds us, was France's century, and he attempts a comprehensive look at the period, emphasizing its strengths and continuities. At the time, France was a modern state, not a state in decline. The nobility was engaging more and more in the economic life of the nation; improved communication aided trade, industry, and agriculture; and foreign and colonial trade increased dramatically. Jones gives the Enlightenment similar continuity, arguing that the language of opposition and criticism that emerged after 1750 drew upon a tradition of discourse that in some cases predated 1715. Recapturing the "joy and fear" engendered by the onset of the revolution, Jones allows us to see the period as contemporaries did. An important work that should be welcomed by scholars and specialists, this is recommended for academic collections.-Marie Marmo Mullaney, Caldwell Coll., NJ (c) Copyright 2010. Library Journals LLC, a wholly owned subsidiary of Media Source, Inc. No redistribution permitted.

Historian Jones (The Cambridge Illustrated History of France) has written an exhaustive account of 18th-century France, emphasizing political and economic history. He paints a portrait of a nation opposed to Bourbon absolutism throughout the century, not just at the time of the Revolution. Beginning in the waning years of Louis XIV, philosophers, Jansenists, taxpayers and especially the Paris Parlement, which saw itself as the defender of fundamental law, all criticized the Bourbon regime, pointing to its unwise, revenue-draining wars; persecution of religious dissidents; and ruling in a manner unresponsive to the public will. As Jones convincingly points out, the French Enlightenment changed everything, bringing to the fore a concept of "popular opinion" that would lead the French to believe they had a voice in how their nation was governed. Increasingly after 1750, public opinion became a powerful antiabsolutist influence. Jones devotes an excellent chapter to the Encyclopedie, which he says symbolized a crucial change in French culture and politics. Jones also details the intricate politics of the century, explaining how the monarchs' principal ministers attempted to prop up Bourbon authority and revenues. On the Revolution, Jones is first-rate, especially in depicting the bloody factional feuding between the Jacobins and Girondins. He finishes his book with the Directory and the 1799 coup of Napoleon Bonaparte. This is an outstanding book for academics and students looking for a one-volume overview of the century, but perhaps too dense for the general readers other than those devoted to French history. Two maps. (Mar.) (c) Copyright PWxyz, LLC. All rights reserved

Sure, the Sun King was a putz. But did things have to end so badly for the French monarchy? Perhaps not, writes Jones (History/Univ. of Warwick) in this ambitious, overstuffed examination of France's 18th-century political elite and the tangled process of statecraft. The revolution of 1789 was by no means inevitable, Jones writes contra generations of Marxist historians; taking the long view, Jones suggests that the "revival of political history" in the profession allows a kind of "flattening-out" of the century and even a de-emphasizing of the centrality of that revolution in the great narrative of Western history. Jones assesses the comparative strengths of France at the time-when, he reckons, perhaps one in every six Europeans was French and much of Europe's economy was governed by the nation-and then ticks off, one by one, the many accreted missteps and errors in judgment that squandered that strength, from the enormous cost of building fabulous palaces to the failure of France to maintain a credible North American empire or "to show the flag in the New World in any meaningful way." The time saw an intense concentration of power in the hands of the monarchy: Louis XIV insisted on ruling without ministers and in his own name, for instance, which, Jones writes, made the "rhetorical ploy of rescuing' the ruler from evil' ministers difficult to sustain." The lessening of the powers of the nobility that followed formed an imbalance that would affect French politics up to and during the time of the Revolution, weakening civil government, and paving the way for Napoleon's rightist coup, at which point it was impossible for the government to "gauge the extent of popular discontent because it had destroyed most channels of independent expression," a recipe for bad times indeed. Throughout thickets of data and quotation, Jones is lucid and even entertaining, though he is fond of some curious turns of phrase (remarking here that "it would prove extremely difficult to wash the Sun King out of the French nation's hair," there that the Enlightenment was a "sociological boom-box") that may make some readers despair. Still: a novel approach to the study of 18th-century French history.
More book reviews at iDreamBooks.com