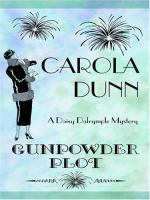 Vividly evoking the life and times of 1920s England, this is a classic crime novel that will delight and charm the many fans of the formidable Daisy Dalrymple.

At the start of Dunn's diverting 15th Daisy Dalrymple mystery (after 2005's Fall of a Philanderer), a pregnant Daisy joins her former school chum Gwen Tyndall at Edge Manor in Didmarsh-under-Edge for the Tyndalls' 1924 Guy Fawkes fete, an annual celebration the illustrious family has observed since 1606. As fireworks explode above the manor, Daisy realizes all is not well among the fractious family members, who include Gwen's sisters, Adelaide and Barbara; her prodigal brother, Jack; her fragile mother; and irascible father, Sir Harold. When Jack discovers the bodies of his father and an Australian visitor, Mrs. Gooch, it appears Sir Harold shot Mrs. Gooch and then himself. Daisy's husband, DCI Alec Fletcher, arrives to investigate the case, while Daisy exhibits her usual common sense and charm in solving it. (Sept.) (c) Copyright PWxyz, LLC. All rights reserved

Daisy Dalrymple Fletcher, pregnant but still working as a journalist, travels to the country estate of her friend Gwen Tyndall to see the famous Guy Fawkes celebration that the family hosts each year. Upon arrival, she meets Gwen's father, the viscount, a strict bully who expects everyone to conform to his often-unreasonable expectations. When someone finds the viscount dead on the floor of his study, it looks like a suicide, complicated by the fact that he apparently killed a visiting Australian woman before taking his own life. Daisy's husband, Alec Fletcher, Detective Chief Inspector of Scotland Yard, must untangle the web of family secrets that led to the tragedy. Of course, the feisty, capable Daisy will provide assistance sorting through the clues and the long list of possible suspects. As always, Dunn evokes the life and times of 1920s England while providing a plot that is a cut above the average British cozy. This will delight readers who love -country-house mysteries. --Barbara Bibel Copyright 2006 Booklist

A very pregnant Daisy Dalrymple Fletcher visits the Cotswolds estate of Edge Manor to write a piece on the Guy Fawkes celebration, a massive fireworks display with murder as its finale. Sir Harold Tyndall is a snobbish domestic tyrant whose family can never please him. Martin Miller, an aeronautical engineer who's encouraging Jack Tyndall to join his firm, is anathema to Sir Harold, who wants his son to manage the estate currently being run by Jack's sister Babs, a woman and therefore incompetent in her father's eyes. Daisy's old school friend Gwen is romantically interested in Miller, and the whole family must cope with the escapades of the hellion sons of their obnoxious sister Adelaide. Daisy's top-drawer pedigree and her genuine interest in the Gunpowder Plot celebration placates Sir Harold until Jack invites Mr. Gooch, an Australian with an English wife, to share a buffet dinner and view fireworks from the terrace. When Sir Harold and Mrs. Gooch are found dead, the Chief Constable calls on Daisy's husband, DCI Alec Fletcher. A plan by Sir Harold to change his will makes Jack the obvious suspect, especially as he may not be the legitimate heir. But Daisy won't believe Jack is guilty. While Alec and his team question the suspects, she does some sleuthing on her own. Fans of the dauntless Daisy (Fall of a Philanderer, 2005, etc.) will delight in this Anglophilic period mystery. Copyright ©Kirkus Reviews, used with permission.