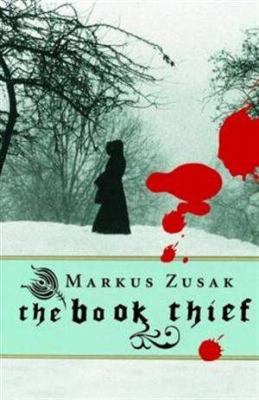 | Germany -- History -- 1933-1949 -- FictionGenre/Form: Historical fiction.DDC classification: Young Adult Subject: Trying to make sense of the horrors of World War II, Death relates the story of Liesel, a young German girl whose book-stealing and story-telling talents help sustain her family and the Jewish man they are hiding, as well as their neighbours. Suggested level: senior secondary.
Tags from this library: No tags from this library for this title. Log in to add tags.
Fiction notes: Click to open in new window

It is 1939. Nazi Germany. The country is holding its breath. Death has never been busier, and will become busier still. Liesel Meminger and her younger brother are being taken by their mother to live with a foster family outside Munich. Liesel's father was taken away on the breath of a single, unfamiliar word - Kommunist - and Liesel sees the fear of a similar fate in her mother's eyes. On the journey, Death visits the young boy, and notices Liesel. It will be the first of many near encounters. By her brother's graveside, Liesel's life is changed when she picks up a single object, partially hidden in the snow. It is The Gravedigger's Handbook, left there by accident, and it is her first act of book thievery. So begins a love affair with books and words, as Liesel, with the help of her accordion-playing foster father, learns to read. Soon she is stealing books from Nazi book-burnings, the mayor's wife's library, wherever there are books to be found. But these are dangerous times. When Liesel's foster family hides a Jewish fist-fighter in their basement, Liesel's world is both opened up, and closed down. THE BOOK THIEF is a story about the power of words to make worlds. In superbly crafted writing that burns with intensity, award-winning author Markus Zusak has given us one of the most enduring stories of our time.

Trying to make sense of the horrors of World War II, Death relates the story of Liesel, a young German girl whose book-stealing and story-telling talents help sustain her family and the Jewish man they are hiding, as well as their neighbours. Suggested level: senior secondary.

This hefty volume is an achievement-a challenging book in both length and subject, and best suited to sophisticated older readers. The narrator is Death himself, a companionable if sarcastic fellow, who travels the globe "handing souls to the conveyor belt of eternity." Death keeps plenty busy during the course of this WWII tale, even though Zusak (I Am the Messenger) works in miniature, focusing on the lives of ordinary Germans in a small town outside Munich. Liesel Meminger, the book thief, is nine when she pockets The Gravedigger's Handbook, found in a snowy cemetery after her little brother's funeral. Liesel's father-a "Kommunist"-is already missing when her mother hands her into the care of the Hubermanns. Rosa Hubermann has a sharp tongue, but Hans has eyes "made of kindness." He helps Liesel overcome her nightmares by teaching her to read late at night. Hans is haunted himself, by the Jewish soldier who saved his life during WWI. His promise to repay that debt comes due when the man's son, Max, shows up on his doorstep. This "small story," as Death calls it, threads together gem-like scenes of the fates of families in this tight community, and is punctuated by Max's affecting, primitive artwork rendered on painted-over pages from Mein Kampf. Death also directly addresses readers in frequent asides; Zusak's playfulness with language leavens the horror and makes the theme even more resonant-words can save your life. As a storyteller, Death has a bad habit of forecasting ("I'm spoiling the ending," he admits halfway through his tale). It's a measure of how successfully Zusak has humanized these characters that even though we know they are doomed, it's no less devastating when Death finally reaches them. Ages 12-up. (Mar.) (c) Copyright PWxyz, LLC. All rights reserved

Nazi Germany during World War II is the backdrop for this "small story" that explores the power of words to affect the human condition. Death is the narrator here, performed with detached perfection by Corduner, recounting the story of the young thief, Liesel, who discovers books have the ability to sustain her community amidst the horrors of war. This 2007 Michael L. Printz Honor Book is also a Common Core text exemplar for grades 9-10. Common Core Standard: RL.9-10.2. Determine a theme or central idea of a text and analyze in detail its development over the course of the text, including how it emerges and is shaped and refined by specific details; provide an objective summary of the text. Content Standard: Massachusetts (Reading Standards for Literature 6-12) Grades 9-10: MA.8.A. Relate a work of fiction, poetry, or drama to the seminal ideas of its time. (c) Copyright 2012. Library Journals LLC, a wholly owned subsidiary of Media Source, Inc. No redistribution permitted.

Gr. 10-12. Death is the narrator of this lengthy, powerful story of a town in Nazi Germany. He is a kindly, caring Death, overwhelmed by the souls he has to collect from people in the gas chambers, from soldiers on the battlefields, and from civilians killed in bombings. Death focuses on a young orphan, Liesl; her loving foster parents; the Jewish fugitive they are hiding; and a wild but gentle teen neighbor, Rudy, who defies the Hitler Youth and convinces Liesl to steal for fun. After Liesl learns to read, she steals books from everywhere. When she reads a book in the bomb shelter, even a Nazi woman is enthralled. Then the book thief writes her own story. There's too much commentary at the outset, and too much switching from past to present time, but as in Zusak's enthralling I Am the Messenger (2004), the astonishing characters, drawn without sentimentality, will grab readers. More than the overt message about the power of words, it's Liesl's confrontation with horrifying cruelty and her discovery of kindness in unexpected places that tell the heartbreaking truth. --Hazel Rochman Copyright 2006 Booklist

(High School) Set in a small town in Nazi Germany, Zusak's sweeping, ultimately heartbreaking novel is told (appropriately, by Death itself) in gorgeous language that contrasts markedly with the stark events -- just as main character Liesel's rich life contrasts with the bleakness of her circumstances. Audiobook narrator Corduner confidingly draws listeners in before Liesel steals a single book; and each character is sharply delineated, from the deep-thinking, compassionate Death to Liesel's hectoring foster mother. Corduner effortlessly handles the book's distinctively expansive yet intimate nature in a tour de force performance. (c) Copyright 2010. The Horn Book, Inc., a wholly owned subsidiary of Media Source, Inc. No redistribution permitted. All rights reserved.

When Death tells a story, you pay attention. Liesel Meminger is a young girl growing up outside of Munich in Nazi Germany, and Death tells her story as "an attempt--a flying jump of an attempt--to prove to me that you, and your human existence, are worth it." When her foster father helps her learn to read and she discovers the power of words, Liesel begins stealing books from Nazi book burnings and the mayor's wife's library. As she becomes a better reader, she becomes a writer, writing a book about her life in such a miserable time. Liesel's experiences move Death to say, "I am haunted by humans." How could the human race be "so ugly and so glorious" at the same time? This big, expansive novel is a leisurely working out of fate, of seemingly chance encounters and events that ultimately touch, like dominoes as they collide. The writing is elegant, philosophical and moving. Even at its length, it's a work to read slowly and savor. Beautiful and important. (Fiction. 12+) Copyright ©Kirkus Reviews, used with permission.
More book reviews at iDreamBooks.com