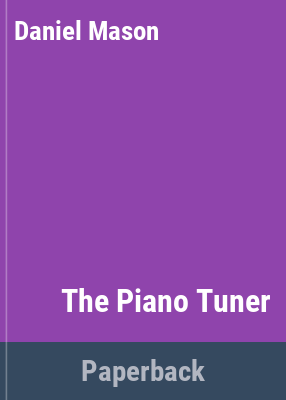 The Shan Hills, Edgar repeated and stared past the temples that stood like soldiers in formation to the mountains, which rose abruptly from the plain and seemed to hover in the sky. He thought of a river that ran through those hills, and how somewhere, hidden in the darkness, a man waited who perhaps stared out at the same sky. Who had yet to know his name. On a misty London afternoon in 1886, piano tuner Edgar Drake receives a strange request from the War Office: he must leave his wife, and his quiet life in London, to travel to the jungles of Burma to tune a rare Erard grand piano. The piano belongs to Surgeon-Major Anthony Carroll, an enigmatic British officer, whose success at making peace in the war-torn Shan States is legendary, but whose unorthodox methods have begun to attract suspicion. So begins the journey of the soft-spoken Edgar across Europe, the Red Sea, India, Burma, nd at last into the remote highlands of the Shan States. En route he is entranced by the Doctor's letters and by the shifting cast of tale-spinners, soldiers and thieves who cross his path. As his captivation grows, however, so do his questions: about the Doctor's true motives, about an enchanting and

In October 1886, piano tuner Edgar Drake receives an astonishing request from the War Office. He is asked to go to Burma to tune the Erard piano of Surgeon-Major Anthony Carroll, to whom the office is much indebted for keeping the peace in the remote and restless Shan States. Drake accepts the assignment and launches on a journey of self-discovery that takes him from London to Calcutta to Rangoon and, with the help of a mysterious Burmese woman named Khin Myo, to the compound of the formidable Dr. Carroll himself. Yes, he successfully tunes the piano and even plays a concert for visiting dignitaries he chooses Bach's immortal Well-Tempered Clavier, reasoning that it has universal application but Drake finds that he cannot leave. He is altered by the beauty of the place, slowly opening himself to Khin Myo, and caught up in Carroll's machinations, which may or may not be seditious. It ends, inevitably, in tragedy, but the reader will regret that it ends at all. This is an utterly involving first novel, rich in historical detail and as lulling as Burma itself. Mason's language is at once tropically lush and as precise as a Bach prelude. A novel for readers of literary and popular fiction alike; highly recommended. [Previewed in Prepub Alert, LJ 5/1/02.] Barbara Hoffert, "Library Journal" (c) Copyright 2010. Library Journals LLC, a wholly owned subsidiary of Media Source, Inc. No redistribution permitted.

Twenty-six-year-old Mason has penned a satisfying, if at times rather slow, debut historical. Edgar Drake lives a quiet life in late 19th-century London as a tuner of rare pianos. When he's summoned to Burma to repair the instrument of an eccentric major, Anthony Carroll, Edgar bids his wife good-bye and begins the months-long journey east. The first half of the book details his trip, and while Mason's descriptions of the steamships and trains of Europe and India are entertaining, the narrative tends to drag; Edgar is the only real character readers have met, and any conflicts he might encounter are unclear. Things pick up when Edgar meets the unconventional Carroll, who has built a paradise of sorts in the Burmese jungle. Edgar ably tunes the piano, but this turns out to be the least of his duties, as Carroll seeks his services on a mission to make peace between the British and the local Shan people. During his stay at Carroll's camp, Edgar falls for a local beauty, learns to appreciate the magnificence of Burma's landscape and customs and realizes the absurdity of the war between the British and the Burmese. While Mason's writing smoothly evokes Burma's beauty, and the idea that music can foster peace is compelling, his work features so many familiar literary pieces-the nerdy Englishman; the steamy locale; the unjust war; the surprisingly cultured locals-that readers may find themselves wishing they were turning the pages of Orwell's Burmese Days or E.M. Forster's A Passage to India instead. (c) Copyright PWxyz, LLC. All rights reserved

In an ambitious, imaginative work set in 1886, first-novelist Mason (who is a medical student) sends piano tuner Edgar Drake deep into Burma. The British War Office, in an attempt to placate one of their key people, has requested the services of Drake in order to repair a rare Erard grand piano. Army Surgeon-Major Anthony Carroll has a unique approach to keeping the peace in the southern Shan States--he uses poetry, music, and medicine to establish diplomatic connections with the community and their rulers. Many high-ranking British officers are highly suspicious of Carroll's methods, but the charismatic doctor has had unprecedented success in keeping the rebel forces in check, and the army takes great pains to fill his whimsical requests--first for the piano, then for the tuner. And Drake, after a weeks-long, often arduous journey, arrives in Burma and falls in love with the country: "the predawn palisades of fishing nets, the glow of ground turmeric, the weep of jungle vines." Deeply impressed with the doctor's erudition, Drake endlessly delays his departure and is drawn into Carroll's political scheme, which ends in tragedy. A gifted storyteller and writer, Mason uses translucent prose rich with metaphor and allusion to call up Conrad's signature theme of the voyage into the wilderness. --Joanne Wilkinson

A rattling good story, complex characterizations, and a brilliantly realized portrayal of an alien culture-all combine to dazzling effect in this first by a California medical student who has worked and studied in the Far East. In mild-mannered London, 1886-87, piano tuner Edgar Drake is persuaded by the British War Office to travel to Mandalay and beyond, during the third of a succession of Anglo-Burmese Wars, to fulfill a strange request from an army surgeon-major serving in Burma. Drake has been chosen to tune an Erard (French-made) grand piano for Dr. Anthony Carroll, a pacifist iconoclast who has set about winning over warring tribes by introducing their souls to music and poetry while healing broken bodies. Reasoning that "if we are to make these people our subjects, must we not present the best of European civilization?," Drake undertakes his arduous journey (thrillingly described), eventually arriving at the inland fortress of Mae Lwin, where the suave Carroll-part Albert Schweitzer, part Mistah Kurtz of Heart of Darkness-rules as a benevolent despot, aided in ways that aren't quite clear by a beautiful Burmese woman, Khin Myo, to whom Edgar finds himself increasingly attracted. A wealth of specific information-musical, medical, historical, political-and numerous colorfully detailed vignettes of life in Burma's teeming cities and jungle villages provide a solid context for the increasingly intricate plot, which brings Drake into "complicity" with Carroll's visionary dream of reconciling various native factions and brokering a peace that surrenders only "limited autonomy" to them. Until the powerful denouement, that is, when Drake discovers the manner in which he himself has been "played" as an instrument, and-in a deeply ironic climactic action-becomes the insubordinate "liberator." (One keeps thinking of what a marvelous movie The Piano Tuner might make. There's a perfect part for Jeremy Irons.) An irresistible amalgam of Kipling, Rider Haggard, and Conrad at their very best. Masterful. First printing of 150,000
More book reviews at iDreamBooks.com