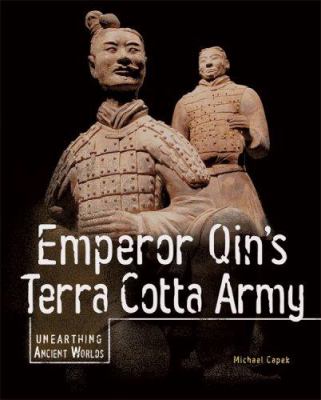 A dead emperor guarded by his army for 2,000 years... One day in 1974, a group of farmers in rural China found a life-size clay statue of a man's head buried deep in a field. When government archaeologists inspected the area, they discovered that beneath the ground were more than eight thousand life-size clay soldiers, each one with a unique face. In nearby chambers, they unearthed clay horses, carefully preserved swords, bronze statues, and other astonishing things. Where did these treasures come from? and why were they buried? Slowly the story revealed itself. It centered around Qin Shi Huangdi, the first emperor of China, who died in 210 B.C.. for forty years leading up to his death, thousands of artists from across China had sculpted an enormous city where he would be buried, guarded and protected by thousands of clay soldiers. This city remained hidden for over two thousand years. This important archaeological find offers amazing insight into the civilization of ancient China.

An accidental discovery -- A spirit city -- The faces of warriors -- The search widens -- The museum of terra cotta warriors and horses -- Chariots for the emperor -- Within the emperor's tomb -- Epilogue.

An accidental discovery -- A spirit city -- The faces of warriors -- The search widens -- The museum of terra cotta warriors and horses -- Chariots for the emperor -- Within the emperors tomb -- Epilogue: Qin shi huangdi lives again.