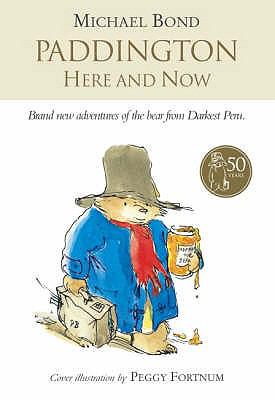 Genre/Form: Children's stories. | Children's fiction.DDC classification: Children's Fiction Subject: Paddington Bear always manages to find himself in tricky situations. But since arriving from his native Peru after an earthquake, Paddington has always felt at home with the Brown family who found him on Paddington Station. Then one day, a mysterious visitor arrives at 32 Windsor Gardens. Is it time for Paddington to decide where 'home' really is?
Tags from this library: No tags from this library for this title. Log in to add tags.

Paddington - the beloved, classic bear from Darkest Peru - is back in this fantastically funny, long-awaited, brand new illustrated novel from master storyteller Michael Bond! 'I'm not a foreigner,' exclaimed Paddington hotly. 'I'm from Darkest Peru.' Paddington Bear always manages to find himself in tricky situations, sometimes extraordinary situations. Like the time he had a difficult encounter with a policeman or when he found himself in deep water with a newspaper reporter. But since arriving from his native Peru after an earthquake Paddington has always felt at home with the Brown family who found him on Paddington station. Then one day, a surprise visitor arrives at thirty-two Windsor Gardens. Is it time for Paddington to decide where 'home' really is? In 2008 Michael Bond's first novel featuring the adventures of Paddington Bear will celebrate its fiftieth anniversary. Paddington's amazing ability to get into and out of trouble is at the heart of the countless stories that have been loved the world over ever since. However, it is many years since a new novel has been published, and in celebration of this landmark, Michael Bond has written the funniest and the most moving Paddington novel ever.

"Brand new adventures of the bear from darkest Peru"--Cover.

Paddington Bear always manages to find himself in tricky situations. But since arriving from his native Peru after an earthquake, Paddington has always felt at home with the Brown family who found him on Paddington Station. Then one day, a mysterious visitor arrives at 32 Windsor Gardens. Is it time for Paddington to decide where 'home' really is?

Gr 3-5-Fifty years after his first adventure in A Bear Called Paddington, this beloved and well-lauded character returns in a charming new chapter book. Reassuringly, things haven't changed much at 32 Windsor Gardens in the 30 years since the last episode: Paddington, a bear "not short of ideas," is still the apple of the Brown family's eye; the darling of their no-nonsense housekeeper, Mrs. Bird; and the bun-and-cocoa-sharing companion of kindly antiques-dealer Mr. Gruber. Beginning with a chapter in which Paddington's trademark shopping basket on wheels goes missing and his visit to the police station goes awry, continuing with several amusing interludes involving the Browns' crotchety next-door neighbor, and culminating with a surprise visit from long-lost Uncle Pastuzo, this volume retains the gentle humor of the earlier installments. Wordplay, misunderstandings, and double meanings abound, all proffered with perfect British wit and comic pacing. Alley's delightful pen-and-ink drawings reflect the spirit of Peggy Fortnum's familiar illustrations while coming across as fresh and original. As delectable as a marmalade sandwich served with a flourish from beneath a bear's hat, this is a must-have for Paddington fans.-Joy Fleishhacker, School Library Journal (c) Copyright 2010. Library Journals LLC, a wholly owned subsidiary of Media Source, Inc. No redistribution permitted.

For a bear who made his first appearance 50 years ago, Paddington wears his years lightly. In his latest adventures, he loses his shopping basket and finds it again, foils an attempted robbery, and takes a ride on the London Eye with his dearest friends and a long-lost uncle. More to the point for Paddington fans, along the way he enjoys his elevenses with Mr. Gruber, infuriates Mr. Curry, and gives a hard stare to anyone who confounds him. Bond has not lost his light touch in detailing the amusing day-to-day adventures of this lovable bear, and Alley's ink drawings illustrate the episodes with warmth and wit. Perhaps readers who grew up with the Paddington picture books are the natural audience for this episodic, full-length story, which could be read aloud to younger children.--Phelan, Carolyn Copyright 2008 Booklist

(Primary, Intermediate) Somebody must have given Mr. Bond a good hard stare to persuade him to stop messing about writing for adults and get back to Paddington Bear. Paddington fans will be relieved to know that in this fiftieth-anniversary offering nothing has changed. In a series of episodes, Paddington gets into trouble, never with malice, usually because of a misunderstanding, and always ending in a glorious muddle; at which point Paddington, confronted with an enraged adult authority figure, slips quietly offstage, forgotten, forgiven, and ready for the next chapter. The humor involves much slapstick and wordplay (some of it likely to be opaque to the American reader, but a kipper's a kipper on both sides of the Atlantic). A few modern references -- to frequent flyer miles, the London Eye, and human organ donation -- have crept in, but Mr. Curry, the neighbor, is still grumpy; Mrs. Bird, the housekeeper, is still a force to be reckoned with; and Paddington still wanders about with his shopping basket on wheels (first given to him by Mrs. Brown in 1958) and a marmalade sandwich under his hat in case of emergencies. Best of all, the pen-and-ink illustrations are true to the spirit of the original art, portraying Paddington as gracious, deeply engaged with life, and nobody's teddy bear.From HORN BOOK, (c) Copyright 2010. The Horn Book, Inc., a wholly owned subsidiary of Media Source, Inc. No redistribution permitted.

In the past 50 years, very little has changed for the residents of 32 Windsor Gardens. They still live with a bear from Darkest Peru who happens to go by the name of Paddington. Moreover, Paddington is just as curious and prone to getting himself into trouble as he has always been. One minute he's been arrested for not having a driver's license, the next he's given the local travel agent seven kinds of fits. Though most of the stories in this latest Michael Bond title are independent of one another, the last few tales concern a visitor from Paddington's past and a lovely surprise for the whole family. Interior pen-and-ink illustrations by R.W. Alley act as the perfect complement to Bond's infinitely lovable bear. Even alongside such modern details as cell phones and the London Eye, Paddington's stories retain a timeless charm that will satisfy old fans and surely lure in new ones. Children's literature in its finest, purest form. (Fiction. 5-10) Copyright ©Kirkus Reviews, used with permission.
More book reviews at iDreamBooks.com