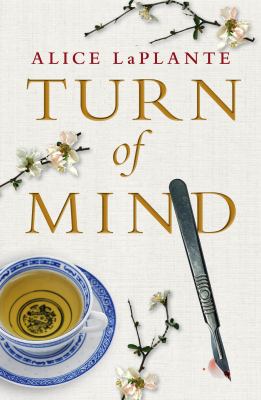 | Women surgeons FictionGenre/Form: Detective and mystery fiction. | Thrillers (Fiction)DDC classification: LAP Summary: Implicated in the murder of her best friend, Jennifer White, a brilliant retired surgeon with dementia, struggles with fractured memories of their complex relationship and wonders if she actually committed the crime.
Tags from this library: No tags from this library for this title. Log in to add tags.
Fiction notes: Click to open in new window

Dr. Jennifer White's life-long friend Amanda is dead--murdered. Four of her fingers were surgically removed after death, and Dr. White is the main suspect. But she doesn't know if she did it.

As dementia takes hold of White, a picture emerges of two proud, forceful women, who were both best friends and formidable adversaries. And of White's family--her two grown children, her strictness and exactitude. As the police investigation closes in, and her relationships with her children intensify, White searches her ever-fragmented mind for images of herself in Amanda's house that day. Is her shattered memory preventing her from finding the truth or helping her to hide it?

Turn of Mind is a remarkable debut: literary and thriller, and a stunning exploration of a crumbling reality. Through White's eloquent, fractured voice, Alice LaPlante examines the frailty of memory and how it defines our very existence.

Implicated in the murder of her best friend, Jennifer White, a brilliant retired surgeon with dementia, struggles with fractured memories of their complex relationship and wonders if she actually committed the crime.

Amanda O'Toole has been murdered and four of her fingers were surgically removed. The police suspect the victim's best friend, Dr. Jennifer White, but Jennifer is suffering from Alzheimer's and has no idea whether or not she committed the murder. Most of the time she doesn't even realize her friend is dead. VERDICT This is an ingenious mystery with a highly unreliable narrator. Full of twists and turns, it will keep fans of Before I Go To Sleep and Gone Girl guessing right up to the end. (LJ 3/1/11) (c) Copyright 2014. Library Journals LLC, a wholly owned subsidiary of Media Source, Inc. No redistribution permitted.

LaPlante's impressive first novel sensitively explores the mental disintegration of widowed 64-year-old Jennifer White, a once-lauded Chicago hand surgeon, who charts her own experiences with Alzheimer's both consciously, in notes she writes to herself and thoughts she shares, and unconsciously, as she records conversations and actions she witnesses but doesn't understand. When someone fatally bludgeons Jennifer's best friend, 75-year-old Amanda O'Toole, who lives just three doors away, suspicion falls on Jennifer because the killer surgically removed four fingers from Amanda's right hand. In a satisfying twist, Jennifer honestly doesn't know herself whether she committed the murder. Jennifer's 29-year-old lawyer son, Mark, wishes to have his mother declared mentally incompetent, while her 24-year-old daughter, Fiona, a sweet, loving flake, and her full-time caretaker, Magdalena, act out of less selfish motives. Mystery fans should be prepared for a subtle literary novel in which the unfolding of Jennifer's condition and of her past matters far more than the whodunit. 16-city author tour. (July) (c) Copyright PWxyz, LLC. All rights reserved.

*Starred Review* Part literary novel, part thriller, LaPlante's haunting first novel traces the deterioration of orthopedic surgeon Jennifer White, who at 64 is suffering severe dementia due to Alzheimer's disease. Told entirely from her viewpoint, this is an often startling portrait of a fiercely intelligent woman struggling mightily to hold on to her sense of self. As her lucidity waxes and wanes, her dire circumstances increasingly come to light. Her husband has recently died, and she lives with a caretaker in her handsome house on Chicago's North Side. She has two children who seem to be battling over her money. Most distressing, her best friend, Amanda O'Toole, has just been murdered, her body found in her home with four fingers surgically removed. Now the police consider Jennifer a person of interest, and even Jennifer herself does not know whether she killed Amanda. It appears their friendship was a difficult one, marred by frequent arguments, and Jennifer's seemingly happy marriage was full of secrets and betrayal, all of which Amanda seemed to know about. This masterfully written debut is fascinating on so many levels, from its poignant and inventive depiction of a harrowing illness to its knowing portrayal of the dark complexities of friendship and marriage.--Wilkinson, Joann. Copyright 2010 Booklist

LaPlante's literary novel explores uncharted territory, imagining herself into a mind, one slipping, fading, spinning away from her protagonist, a woman who may have murdered her best friend. Dr. Jennifer White lives in the dark, shadowy forest of forgetfulness. She is 64, a flinty intellectual, competent and career-focused, but she has been forced to retire from orthopedic surgery by the onset of dementia. Her husband is dead. Her childrenprecociously intelligent and possibly bipolar Fiona, a professor, and Mark, an attorney like his late father, but only an imitation of that charismatic and competent manare left to engineer her care. The novel opens with White at home, cared for by Magdalena, a paid companion. Fiona has control of her mother's finances, a source of conflict with Mark, troubled by money problems and the hint of addiction. White's own strobe flashes of lucidity reveal the family's history. White's closest friend, Amanda, was found dead a few days previously, a thing she sometimes understands. Four fingers from one of Amanda's hand had been surgically amputated. Amanda, her husband Peter and Jennifer and James were close friends, but Amanda possessed an arrogant streak, a hyper-moralistic and judgmental attitude, aggravated by a willingness to use secrets to manipulate. Amanda was also childless and jealous, especially of Fiona's affections. LaPlante tells the story poignantly, gracefully and artistically. Jennifer White, as a physician, as a wife, as a mother, leaps from the pages as a powerful character, one who drifts away from all that is precious to herher profession, her mental acuitywith acceptance, anger and intermittent tragic self-knowledge. LaPlante writes in scenes without chapter breaks. White's thoughts and speech are presented in plain text and those of the people she encounters in italics. Despite the near stream-of-consciousness, FaulknerianSound and Furypresentation, the narrative is easily followed to the resolution of the mystery and White's ultimate melancholy and inevitable end. A haunting story masterfully told.]] Copyright Kirkus Reviews, used with permission.
More book reviews at iDreamBooks.com