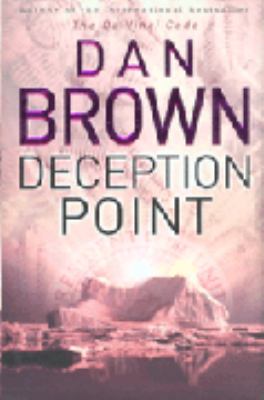 When a new NASA satellite spots evidence of an astonishingly rare object buried deep in the Arctic ice, the floundering space agency proclaims a much-needed victory...a victory that has profound implications for U.S. space policy and the impending presidential election. With the Oval Office in the balance, the President dispatches White House Intelligence analyst Rachel Sexton to the Milne Ice Shelf to verify the authenticity of the find. Accompanied by a team of experts, including the charismatic academic Michael Tolland, Rachel uncovers the unthinkable: evidence of scientific trickery -- a bold deception that threatens to plunge the world into controversy. But before Rachel can contact the President, she and Michael are attacked by a deadly team of assassins controlled by a mysterious power broker who will stop at nothing to hide the truth. Fleeing for their lives in an environment as desolate as it is lethal, their only hope for survival is to find out who is behind this masterful ploy. The truth, they will learn, is the most shocking deception of all. ultrasecret National Reconnaissance Office to the towering ice shelves of the Arctic Circle, and back again to the hallways of power inside the West Wing. Heralded for masterfully intermingling science, history, and politics in his critically acclaimed, blockbuster thrillers Angels & Demons and The Da Vinci Code, Brown has crafted a novel in which nothing is as it seems -- and behind every corner is a stunning surprise. Deception Point is pulse-pounding fiction at its best.

Brown's dazzling high-tech adventure opens with NASA personnel making a startling discovery. An ancient meteorite is found buried within an Arctic glacier. Samples taken from this meteorite reveal that it contains fossils from life forms not previously seen on Earth. Could this discovery prove that we are not alone in the universe? To answer that question, several civilian scientists are dispatched to the site in order to investigate the origin of the fossils and verify NASA's findings. Before any official announcement can be made, however, one of the scientists dies under mysterious circumstances. The remaining scientists quickly realize that all is not what it appears to be as they struggle to separate truth from deceit. With this latest story, Brown (Digital Fortress) proves once again that he is among the most intelligent and dynamic of authors in the thriller genre. He has skillfully blended his own wit and style with the rip-roaring adventure of Cussler and the modern technology of Clancy. Highly recommended for all public libraries. Jeff Ayers, Seattle P.L. (c) Copyright 2010. Library Journals LLC, a wholly owned subsidiary of Media Source, Inc. No redistribution permitted.

Struggling to rebound from a series of embarrassing blunders that have jeopardized its political life at the start of this lively thriller, NASA makes an astounding discovery: there is a meteor embedded deep within the arctic ice. And it isn't just any meteor. Inside the huge rock, which crashed to earth in 1716, are fossils of giant insects proof of extraterrestrial life. Yet, given NASA's slipping reputation, the question arises: Is the meteor real or a fake? That uncertainty dogs NASA and its supporters in Brown's latest page-flipper, a finely polished amalgam of action and intrigue. Trying to determine the truth are intelligence agent Rachel Sexton and popular oceanographer Michael Tolland, both among the first to suspect something is amiss when the meteor is pulled from the ice. Their doubts quickly make them the targets of a mysterious death squad controlled by someone or something that doesn't want the public to hear the meteor may be a fraud. Together, Sexton and Tolland scramble across arctic glaciers, take refuge on ice floes, are rescued by a nuclear submarine, then find themselves trapped aboard a small research vessel off the coast of New Jersey. All the while, the nation's capital is buzzing as to whether NASA has engaged in deception. Or is NASA just a dupe for aerospace companies that have long wanted a bigger share of space contracts? Brown (Angels & Demons) moves into new territory with his latest. It's an excellent thriller a big yet believable story unfolding at breakneck pace, with convincing settings and just the right blend of likable and hateful characters. He's also done his research, folding in sophisticated scientific and military details that make his plot far more fulfilling than the norm. (Nov.) (c) Copyright PWxyz, LLC. All rights reserved

The phrase mixed bag was probably invented to describe novels like this one. It has characters that range from inventive to wooden, dialogue that bounces between evocative and cliched, a narrative structure that is sometimes serpentine and sometimes childishly simple, and a plot that lies somewhere between bold and ridiculous. While most readers will accept the author's premise--that a remarkable discovery in the Arctic may offer proof of extraterrestrial life--others may have trouble with his casting of NASA as a murderous villain. Still, this is pretty exciting stuff (Can an intelligence agent and a scholar blow the lid off a massive conspiracy before they are assassinated?), and Brown certainly does have a knack for spinning a suspenseful yarn. On the other hand, his writing style is merely adequate. In the end, what does Brown's mixed bag add up to? Those who require only that thrillers deliver the requisite number of chills will have a good time here, but those looking for a little artistry, a little panache, are likely to be disappointed. --David Pitt

A mostly tedious third technothriller from the author of Angels and Demons (2000), etc. Incumbent President Zach Herney is fighting for his life in an upcoming election against the slick and slippery Senator Sedwick Sexton. Herney is a staunch supporter of NASA, while Sexton has been using the expensive, mistake-prone, and nonprofitable agency as a convenient whipping-boy in his stump speeches. Protagonist Rachel Sexton, the senator's daughter, works for the National Reconnaissance Office, where she digests information into reports used by the White House. The fact that she works so closely with the president has made for no small amount of tension between her and her father, of course. At the outset of the story, Rachel is whisked off to a spot somewhere near the Arctic Circle where NASA is trying to recover a meteor with what looks like fossils of extraterrestrial life on it from underneath two hundred feet of ice. Naturally, things aren't quite what they seem, what with the small band of Delta Force soldiers secretly watching the NASA encampment. The more that Rachel learns about the meteor, with the help of popular scientist Michael Tolland and a NASA techie by the name of Corky, the less things make sense. The author has an impressive grasp of his material, and even though this is the type of thriller where the gadgetry is often more believable than the wooden characters (the Delta Force soldiers' guns that create bullets out of snow are especially cool), Brown's scientific knowledge isn't what ultimately dooms the book. The story, which has an initial rush to it, bogs down once it starts plodding through all the government shenanigans and secret plots. Although Brown is a more astute storyteller than most of his brethren in the technothriller vein, and won't lose any fans this time out, he's never able to convincingly marry the technical and the human sides of Deception Point.
More book reviews at iDreamBooks.com