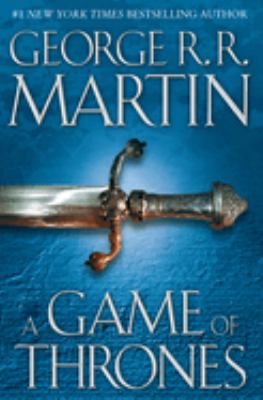 Summary: The kingdom of the royal Stark family faces its ultimate challenge in the onset of a generation-long winter, the poisonous plots of the rival Lannisters, the emergence of the Neverborn demons, and the arrival of barbarian hordes.
List(s) this item appears in: TV and Movies Fiction notes: Click to open in new window
Total holds: 0

NOW THE ACCLAIMED HBO SERIES GAME OF THRONES --THE MASTERPIECE THAT BECAME A CULTURAL PHENOMENON <br> <br> Winter is coming. Such is the stern motto of House Stark, the northernmost of the fiefdoms that owe allegiance to King Robert Baratheon in far-off King's Landing. There Eddard Stark of Winterfell rules in Robert's name. There his family dwells in peace and comfort: his proud wife, Catelyn; his sons Robb, Brandon, and Rickon; his daughters Sansa and Arya; and his bastard son, Jon Snow. Far to the north, behind the towering Wall, lie savage Wildings and worse--unnatural things relegated to myth during the centuries-long summer, but proving all too real and all too deadly in the turning of the season.<br> <br> Yet a more immediate threat lurks to the south, where Jon Arryn, the Hand of the King, has died under mysterious circumstances. Now Robert is riding north to Winterfell, bringing his queen, the lovely but cold Cersei, his son, the cruel, vainglorious Prince Joffrey, and the queen's brothers Jaime and Tyrion of the powerful and wealthy House Lannister--the first a swordsman without equal, the second a dwarf whose stunted stature belies a brilliant mind. All are heading for Winterfell and a fateful encounter that will change the course of kingdoms.<br> <br> Meanwhile, across the Narrow Sea, Prince Viserys, heir of the fallen House Targaryen, which once ruled all of Westeros, schemes to reclaim the throne with an army of barbarian Dothraki--whose loyalty he will purchase in the only coin left to him: his beautiful yet innocent sister, Daenerys.

Includes two maps covering the territory of A game of thrones on endpapers.

The kingdom of the royal Stark family faces its ultimate challenge in the onset of a generation-long winter, the poisonous plots of the rival Lannisters, the emergence of the Neverborn demons, and the arrival of barbarian hordes.

The author of such sf classics as The Armageddon Rag (1983) marks the beginning of a new fantasy series about a world where the summer and winter seasons can span generations. (c) Copyright 2010. Library Journals LLC, a wholly owned subsidiary of Media Source, Inc. No redistribution permitted.

In a world where the approaching winter will last four decades, kings and queens, knights and renegades struggle for control of a throne. Some fight with sword and mace, others with magic and poison. Beyond the Wall to the north, meanwhile, the Others are preparing their army of the dead to march south as the warmth of summer drains from the land. After more than a decade devoted primarily to TV and screen work, Martin (The Armageddon Rag, 1983) makes a triumphant return to high fantasy with this extraordinarily rich new novel, the first of a trilogy. Although conventional in form, the book stands out from similar work by Eddings, Brooks and others by virtue of its superbly developed characters, accomplished prose and sheer bloody-mindedness. Although the romance of chivalry is central to the culture of the Seven Kingdoms, and tournaments, derring-do and handsome knights abound, these trappings merely give cover to dangerous men and women who will stop at nothing to achieve their goals. When Lord Stark of Winterfell, an honest man, comes south to act as the King's chief councilor, no amount of heroism or good intentions can keep the realm under control. It is fascinating to watch Martin's characters mature and grow, particularly Stark's children, who stand at the center of the book. Martin's trophy case is already stuffed with major prizes, including Hugos, Nebulas, Locus Awards and a Bram Stoker. He's probably going to have to add another shelf, at least. Major ad/promo. (Aug.) (c) Copyright PWxyz, LLC. All rights reserved

The first volume in Martin's first fantasy saga, A Song of Ice and Fire, combines intrigue, action, romance, and mystery in a family saga. The family is the Starks of Winterfell, a society in crisis due to climatic change that has created decades-long seasons, and a society almost without magic but with human perversity abundant and active. Martin reaches a new plateau in terms of narrative technique, action scenes, and integrating (or not injecting) his political views into the story. He does not avoid a dauntingly large cast and a daunting number of viewpoint shifts, but these are problems seemingly inseparable from the multivolume fantasy genre. Accordingly, one doubts there will be any other comfortable entry point into this example of the genre except at the beginning. Judging by this beginning, however, it promises to repay reading and rereading, from first volume to last, on account of its literacy, imagination, emotional impact, and superb world-building. --Roland Green

After a long silence (Portraits of his Children, stories, 1987), the author of the cult The Armageddon Rag (1983) returns with the first of a fantasy series entitled, insipidly enough, A Song of Ice and Fire. In the Seven Kingdoms, where the unpredictable seasons may last decades, three powerful families allied themselves in order to smash the ruling Targaryens and depose their mad king, Rhaegar. Robert Baratheon claimed the throne and took to wife Tywin Lannister's daughter, Cersei; Ned Stark returned north to gloomy Winterfell with its massive, ancient Wall that keeps wildings and unspeakable creatures from invading. Some years later, Robert, now drunk and grossly fat, asks Ned to come south and help him govern; reluctantly, since he mistrusts the treacherous Lannisters, Ned complies. Honorable Ned soon finds himself caught up in a whirl of plots, espionage, whispers, and double-dealing and learns to his horror that the royal heir, Joffrey, isn't Robert's son at all but, rather, the product of an incestuous union between the Queen and her brother Jaime--he murdered Rhaegar despite the latter's surrender. Ned attempts to bargain with Cersei and steels himself to tell Robert--but too late. Swiftly the Lannisters murder the King, consign Ned to a dungeon, and prepare to seize the throne, opposed only by the remaining Starks and Baratheons. On the mainland, meanwhile, the brutal and stupid Viserys Targaryen sells his sister Dany to a barbarian horse-warrior in return for a promise of armies to help him reconquer the Seven Kingdoms. A vast, rich saga, with splendid characters and an intricate plot flawlessly articulated against a backdrop of real depth and texture. Still, after 672 dense pages, were you expecting a satisfying resolution? You won't get it: Be prepared for a lengthy series with an indefinitely deferred conclusion.
More book reviews at iDreamBooks.com