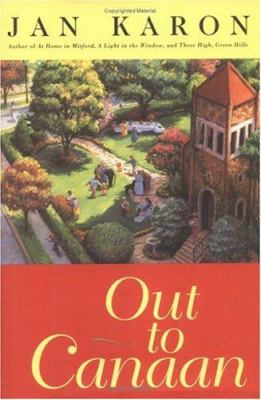 Out to Canaan / Jan Karon.

Genre/Form: Christian fiction. | Domestic fiction. | General fiction.Abstract: A novel on a small town in the heartland of America. A brash new mayoral candidate is calling for development, the Sweet Stuff Bakery may be closing, Father Tim, the Episcopalian rector and his vivacious wife are pondering retirement and someone is wheeling and dealing to turn Mitford's finest house into a spa..
List(s) this item appears in: Christian Fiction
Tags from this library: No tags from this library for this title. Log in to add tags.
Fiction notes: Click to open in new window

Father Tim, the Episcopal rector, and his talented and vivacious wife, Cynthia, are pondering the murky uncertainties of retirement. They're also trying to locate the scattered siblings of Dooley Barlowe, the mountain boy they love as their own. A brash new mayoral candidate is calling for aggressive development, and a tough survivor must hunker down for the fight of her life. Worse, the Sweet Stuff Bakery may be closing, and a suspicious real estate agent is trying to turn the beloved house on the hill into a spa. Can change be coming to Mitford? The buzz on Main Street says yes. Change is certainly coming to the tenderest regions of several townspeople's lives. A woman struggles every day to stay on course after years of hard living. A man tries to forgive himself for a tragic mistake. And the town's most eligible bachelor leaves Mitford - and returns with a stunning surprise.

A novel on a small town in the heartland of America. A brash new mayoral candidate is calling for development, the Sweet Stuff Bakery may be closing, Father Tim, the Episcopalian rector and his vivacious wife are pondering retirement and someone is wheeling and dealing to turn Mitford's finest house into a spa..

Though facing retirement, Father Tim Kavanagh hasn't slowed down one bit since his appearance in These High, Green Hills (Viking, 1996). Racing from one good deed to another, Father Timothy takes in stray sick folk, finds an abandoned child, and helps his favorite baker write a winning jingle. A mayoral race pitting the long-time mayor Esther Cunningham against the possibly corrupt Mack Stroupe makes for some colorful sparring. Father Timothy applies his own unique, time-honored method of intuition, prayer, or dietary indulgence to a multitude of problems big and small. His late-in-life marriage to Cynthia continues to be a blessing readers will feel privileged to share. Distinguished by their rare tone of kindness, Karon's Mitford novels create instant warmth and coziness. Out to Canaan continues in this spirit, offering comedy and consolation to all. For most fiction collections. [Previewed in Prepub Alert, LJ 2/1/97.]Keddy Ann Outlaw, Harris Cty. P.L., Houston, Tex. (c) Copyright 2010. Library Journals LLC, a wholly owned subsidiary of Media Source, Inc. No redistribution permitted.

In this fourth book of the Mitford Years series (following At Home with Mitford, A Light in the Window and These High, Green Hills), Karon continues to develop her Heartland of America town. The plot deals with the mayoral race between long-time incumbent Esther Cunningham and newcomer Mack Stroupe. As the two race neck-and-neck for the finish line, the microcosmic Mitford world teems with the small triumphs and crises of Southern rural life. Father Timothy Kavanagh, rector of the Chapel of Our Lord and Savior, his wife, Cynthia, and their young charge, Dooley Barlowe, balance a family life that includes his impending retirement, her Primrose Tea and Dooley's budding interest in the opposite sex. In this church-going community, these and similar concerns share equal billing in civic gossip, centering on Stroupe's plans for development and the ads the locals take out in the town paper in support of Cunningham. But greater than the political reality in Mitford is the Canaan referred to in the titleThe Promised Land. With a belief in God's Providence and a sly sense of humor (one character notes that now Abraham's 600-mile trip to Canaan would require four visas), Mitford navigates by a sort of pre-Enlightenment historical compass. Significantly, from the novel's introductory chit-chat about flowers frozen in a cold snap to the announcement of the mayoral tie at the end, old Miss Rose Watson mishears everything that's saidbut, in Mitford, does the temporal world really matter? Using an off-handed solution that would shock serious devotees of American politics, the Mitfordites break the electoral stalemate, then turn with relief to their alternate reality of such effortless natural cohesion that, in retrospect, politics seems a mere afterthought, grist for the insatiable rumor mill. Though she makes no attempt to suggest the full scope of the human condition, Karon's devoted readers will undoubtedly adore another upbeat visit to her idealized and endearing corner of America.(May) (c) Copyright PWxyz, LLC. All rights reserved

Here is another visit to the little mountain village of Mitford (population 1,000) and Father Tim Kavanaugh, rector of Lord's Chapel. A year or so has passed since the events in Karon's previous book, These High, Green Hills [BKL Jl 96]. Dooley Barlowe, Father Tim's unofficially adopted son, comes home from prep school for the summer. Father Tim continues piecing together Dooley's scattered family, who come from the impoverished Creek community. He drives to Florida to find little Jessie, reunites her with Dooley's brother, Poohbaw, and his mother, Pauline, and helps Pauline find a job managing the dining room at Hope House, the retirement home built by Mitford's wealthiest citizen, Sadie Baxter. What with Dooley being home, and Father Tim and Cynthia taking in the ailing Harvey Welch, another Creek refugee, and 13-year-old Lace Turner coming by to help nurse Harley, who's been like a father to her, Father Tim's rectory is anything but peaceful. A mysterious group called Miami Development wants to buy Fernbank, Sadie Baxter's old home, and turn it into a luxury spa. And the bishop comes to town and announces Father Tim's retirement, now just a year and a half away. Although Mitford and its close-knit community seem quaint and idyllic, Karon's portrayal is never sentimentalized. Out to Canaan can stand alone, but pleasure will be heightened by reading the whole series, a feast of small riches. --Mary Ellen Quinn

More literary comfort food, as Karon agreeably records another year in Mitford, the small town where every problem has a human face and where Father Tim, the Episcopalian rector, is always there to help. Again, like its three predecessors (These High, Green Hills, 1996, etc.), Karon's latest continues the stories of now-familiar Mitford citizens. And again, always at the heart of the action is 60-something Father Tim Kavanagh, who, with wife Cynthia, an author and illustrator, is now ``getting ready to. . . go out to Canaan''- -to retire. Kavanagh is one of those rare literary creations--a credible good man whose goodness comes from faith, humility, and a zest for life. He is a loving pastor who's ever ready to respond to his flock's needs. And needs they have. When Lace, the young girl he rescued from a violent father, is unable to help the ailing Harley, who once took care of her, Tim gives him a home in the rectory; he also helps recovering alcoholic Pauline find work, as well as the baby daughter she gave away; and he advises Winnie, owner of the local bakery, on how to thwart a crooked realtor. Meanwhile, there's a mayoral election to contend with, as Esther Cunningham is challenged by the suspiciously free-spending Mack Stroupe. And a Florida company wants to turn Fernbank, a Mitford landmark, into a spa. While Tim responds to crises, major and minor, he is poignantly aware that his days as a rector are numbered. But as he drives around on Christmas Eve, there's still much to celebrate (``if there were a poll-tax on joy this night of nights, he'd be dead broke''). A heart-warmer that diverts the spirit as it uncloyingly celebrates life in all its quirkiness in a small town. (First printing of 100,000; $150,000 ad/promo; author tour)
More book reviews at iDreamBooks.com