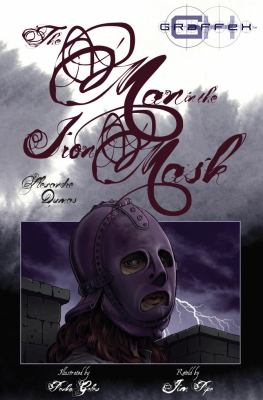 The man in the iron mask / retold by Jim Pipe ; illustrated by Penko Gelev ; series created and designed by David Salariya.

"Graffex" is a new series of illustrated literary classics retold for young readers. "The Man in the Iron Mask" is the last instalment of the adventures of the famous musketeers, Athos, Aramis, Porthos and D'Artagnan. They become involved in a plot to depose King Louis XIV and replace him with his secret twin brother, but the plot goes horribly wrong and leads to an exciting showdown where our heroes must fight for their lives against terrible odds. This classic story is presented as an exciting and fast-paced graphic novel which remains faithful to Dumas' original text - unlike the many later film versions.Specially commissioned full-colour artwork brings excitement and atmosphere to this classic tale. Speech bubbles work with the main text to emphasise and enhance the retelling. There is a detailed timeline of important events during Dumas' lifetime, and notes on the historical characters who appear in the novel. Information about Dumas' life and work - including a list of film and TV adaptations - is provided to encourage young readers to explore other works by this perennially popular author.

The famous musketeers - Athos, Aramis, Porthos and D'Artagnan - are not as young as they were, but they are still ready for adventure. They become involved in a dangerous, top-secret plot - and find themselves fighting for their lives against impossible odds. The retelling of Alexandre Dumas' The man in the iron mask presented in graphic novel format. Suggested level: intermediate, secondary.