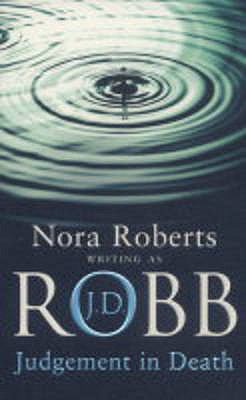 She stood in Purgatory and studied death. The blood and the gore of it, the ferocity of its glee. It had come to this place with the wilful temper of a child, full of heat and passion and careless brutality.' In an uptown strip joint a cop is found bludgeoned to death. The weapon's a baseball bat. The motive is a mystery. It's a case of serious overkill that pushes Eve Dallas straight into overdrive. Her investigation uncovers a private club that's more than a hot spot. Purgatory's a last chance for atonement where everyone is judged. Where your ultimate fate depends on your most intimate sins. And where one cop's hidden secrets are about to plunge innocent souls into vice-ridden damnation

The latest in Robb's (a.k.a. Nora Roberts) Eve Dallas series, this fast-paced mystery takes our tough-minded, insightful homicide lieutenant into the hellish world of "illegals" and crime as she investigates the vicious murder of a cop in a sleazy New York nightclub appropriately named Purgatory and owned, not surprisingly, by Eve's tycoon husband, who owns just about everything around. But things take a twisted and unexpectedly personal turn as Eve starts digging and more bodies show up, and soon she finds herself in the killer's sights as well. A law-flouting criminal kingpin with a personal vendetta who deals in illegals, a crazed cop on a murderous mission, and a pair of perfectly matched protagonists propel this fast-paced, gritty, often violent story, which provides what few romantic suspense novels canDan exquisite blend of electric sensuality, hard-core suspense, and soulwarming romance that continually brings fans back for more. Robb (Witness in Death) is a member of the RWA Hall of Fame and lives in Keedysville, MD. (c) Copyright 2010. Library Journals LLC, a wholly owned subsidiary of Media Source, Inc. No redistribution permitted.

Written under the pen name J.D. Robb, this futuristic mysteryDset in New York City, year 2059Dshowcases veteran writer Nora Roberts's skills at their best. It's as tough, smart, sassy and successful as its heroine, police lieutenant Eve Dallas. The story opens in the upscale nightclub Purgatory, where Dallas discovers the brutally slain body of a fellow officer; another cop is murdered soon thereafter. Both men, it appears, were on the take, and both were connected to elusive criminal Max Ricker. Dallas's investigation, which exposes crime and police corruption, puts both her reputation and life in danger. To make matters worse, Purgatory is owned by her own millionaire husband, RoarkeDa business associate of Ricker's before turning legitimateDand the overlap of professional and personal lives adds extra fireworks to an already tempestuous marriage. Robb's plotting is precise and fast paced, creating a satisfying mystery full of lively, credible twists. Secondary charactersDa troubled female police captain, an Internal Affairs cop with a leftover crush on DallasDare as well-drawn as Dallas herself, a tough but endearing 21st-century woman. Sexy, surprising and often funny power struggles between Dallas and Roarke are the tasty icing on this extremely well-made fictional "cake," which is just the right confection for lazy late-summer reading. (Sept.) (c) Copyright PWxyz, LLC. All rights reserved
More book reviews at iDreamBooks.com