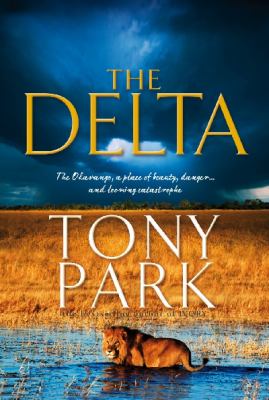 | Botswana -- FictionGenre/Form: Thrillers (Fiction) | Action and adventure fiction.DDC classification: PAR Summary: After a failed assassination attempt on the president of Zimbabwe, ex-soldier turned mercenary Sonja Kurtz is on the run and heads for her only place of refuge, the Okavango Delta in the heart of Botswana. She's looking to rekindle a romance with her childhood sweetheart, safari camp manager Stirling Smith, and desperately wants a fresh start and to leave her perilous warrior lifestyle behind.
Tags from this library: No tags from this library for this title. Log in to add tags.

After a failed assassination attempt on the president of Zimbabwe, ex-soldier turned mercenary Sonja Kurtz is on the run and heads for her only place of refuge, the Okavango Delta in the heart of Botswana. She's looking to rekindle a romance with her childhood sweetheart, safari camp manager Sterling Smith, and desperately wants a fresh start and to leave her perilous warrior lifestyle behind. But Sonja discovers her beloved Delta is on the brink of destruction. She is recruited as an "eco-commando" in a bid to halt a project that will destroy forever the Delta's fragile network of swamps and waterways.Soon Sonja finds herself caught in a deadly web of intrigue involving Sterling, the handsome Martin Steele - her mercenary commander, and a TV heartthrob and wildlife documentary presenter "Coyote" Sam Chapman who blunders out of the bush in a reality show gone wrong. Instead of escaping her violent past, Sonja is now surrounded by men who are relying on her killer instincts to save the day. Where she came to find peace, she finds war... and it is not just the survival of the Delta that is at stake.

After a failed assassination attempt on the president of Zimbabwe, ex-soldier turned mercenary Sonja Kurtz is on the run and heads for her only place of refuge, the Okavango Delta in the heart of Botswana. She's looking to rekindle a romance with her childhood sweetheart, safari camp manager Stirling Smith, and desperately wants a fresh start and to leave her perilous warrior lifestyle behind.

Starred Review. Park, a prolific Australian author, makes his North American debut with this action-packed thriller. After escaping death during a failed assassination attempt, mercenary Sonja Kurtz is hired by a group of African safari lodge operators to blow up a dam that is contributing to the destruction of the Okavango Delta in Botswana. The dam is cutting off the water flow to the Delta, killing plants and drying up water sources needed to sustain wildlife. Politics, a nature documentary film star, Sonja's surly daughter, love, betrayal, and myriad plot twists keep this story moving a mile a minute. Southern Africa is brought to life with detailed description of people, animals, and the wild yet beautiful landscape. Sonja struggles with her past, the moral implications of her actions, and the desire for an inconvenient romance as she applies her razor-sharp thinking and survival skills to bring the novel to a satisfying ending. VERDICT Park (The Hunter) has written a thriller that will make your heart race as you find yourself immersed in the struggle for survival. With a strong sense of place and a furious pace, this novel will appeal to those who enjoy Richard North Patterson's novels.-Terry Lucas, Rogers Memorial Lib., Southampton, NY (c) Copyright 2014. Library Journals LLC, a wholly owned subsidiary of Media Source, Inc. No redistribution permitted.

Australian author Park (Safari) makes his U.S. debut with this ambitious African thriller about plans to bomb an enormous dam in Botswana. Mercenary Sonja Kurtz, an ex-British soldier with a troubled personal past, agrees to carry out the job on behalf of a shadowy assortment of Western tourism operators who make a healthy living from the region's swamps and waterways. Soon, Kurtz finds herself trapped amid competing personal and professional interests, including those of her boss, the duplicitous Martin Steele; former lover and resort owner Sterling Smith; and the ruggedly handsome Sam Chapman, host of an American TV wildlife show that's filming in the area. Kurtz's conflicted feelings about the job complicate matters further, as does her respect for Africa's traditions and pristine beauty. Park excels at capturing the wilds of the continent, as well as its political and commercial pressures. The arrogant, self-righteous Kurtz is often hard to root for, yet she's strangely sympathetic. Agent: Isobel Dixon, Blake Friedmann Literary Agency (U.K.). (Oct.) (c) Copyright PWxyz, LLC. All rights reserved.

A fast-moving thriller starring a female mercenary in a great setting, along with violence and a dollop of sex. Sonja Kurtz attacks a convoy said to be carrying the president of Zimbabwe. It's nothing personal. She kills for a living, and it's a prelude to the main story: a plot to destroy a dam blocking water from the Okavango Delta in Botswana. The surname Kurtz looks like Park's homage to Joseph Conrad's Heart of Darkness, although any similarity between the two characters ends there. Sonja doesn't sit around moaning "The horror! The horror!" but is a steel-tough, compelling protagonist from beginning to her possible end. In one scene, "[s]he held the dead man's cigarette between her blood-stained fingers and closed her eyes as she inhaled deeply." Earlier, she met up with a wildlife documentary crew and a potential love interest in TV personality Coyote Sam, who is more plausible than his name suggests. Add an ex-lover, an estranged father, a daughter of dubious paternity, some AK-47s and RPGs, and a dam that will either improve people's lives or ruin the environment, and you have the elements of an engrossing story. During a lull in the action, Sonja ponders why she didn't become "a doctor or a vet or a nurse or even a bloody secretary." Instead, "[h]er drive, her ambition, her past and her pride had taken her to war and taught her to kill." And she might well ponder why villains never learn to stop explaining themselves at length before pulling the damn trigger. In Africa, she sees a place of great sorrow where people have given up crying. Yet it's also a place of great beauty, as evidenced by the author's rich and authentic detail. Clearly, Park knows and loves Africa. Don't expect damsels in distress in this novel. Do expect a thrill ride that won't disappoint. Copyright Kirkus Reviews, used with permission.
More book reviews at iDreamBooks.com