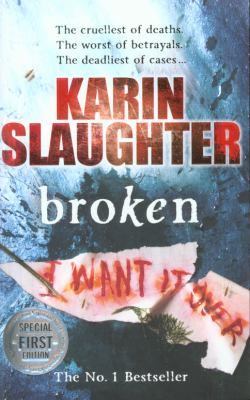 Genre/Form: Detective and mystery fiction.DDC classification: SLA Summary: When Special Agent Will Trent arrives in Grant County, Georgia, he finds a police department determined to protect its own and far too many unanswered questions about a prisoner's death and about a policewoman's role in the death of Grant County's popular police chief.
Tags from this library: No tags from this library for this title. Log in to add tags.
Fiction notes: Click to open in new window

When the body of a young woman is discovered deep beneath the icy waters of Lake Grant, a note left under a rock by the shore points to suicide. But within minutes, it becomes clear that this is no suicide. It's a brutal, cold-blooded murder.

All too soon, former Grant County medical examiner Sara Linton - home for Thanksgiving after a long absence - finds herself unwittingly drawn into the case. The chief suspect is desperate to see her, but when she arrives at the local police station she is met with a horrifying sight - he lies dead in his cell, the words 'Not me' scrawled across the walls.

Something about his confession doesn't add up and, deeply suspicious of Lena Adams, the detective in charge, Sara immediately calls in the Georgia Bureau of Investigation. Shortly afterwards, Special Agent Will Trent is brought in from his vacation to investigate. But he is immediately confronted with a wall of silence. Grant County is a close-knit community with loyalties and ties that run deep. And the only person who can tell the truth about what really happened is dead...
_________________________________________
Crime and thriller masters know there's nothing better than a little Slaughter-

'I'd follow her anywhere' GILLIAN FLYNN
'Passion, intensity, and humanity' LEE CHILD
'A writer of extraordinary talents' KATHY REICHS
'Fiction doesn't get any better than this' JEFFERY DEAVER
'A great writer at the peak of her powers' PETER JAMES
'Raw, powerful and utterly gripping' KATHRYN STOCKETT
'With heart and skill Karin Slaughter keeps you hooked from the first page until the last' CAMILLA LACKBERG
'Amongst the world's greatest and finest crime writers' YRSA SIGUR_x00D0_ARD TTIR

When Special Agent Will Trent arrives in Grant County, Georgia, he finds a police department determined to protect its own and far too many unanswered questions about a prisoner's death and about a policewoman's role in the death of Grant County's popular police chief.

When a young man with limited mental capabilities is jailed on suspicion of murder and subsequently commits suicide, the widow of Grant County's former police chief calls in Special Agent Will Trent to help solve the crime and investigate malfeasance within the local police force. Slaughter's (www.karinslaughter.com) second novel to combine the "Grant County" and "Atlanta" series, following Undone (2009), also available from Brilliance Audio and read by Natalie Ross, is absolutely riveting, with plot twists and turns that will keep listeners guessing through to the very end. Ross's facility in transitioning from male to female, and from young to old, is phenomenal, making this an exceptional listening experience. [The Delacorte hc also received a starred review, LJ 6/1/10.-Ed.]-Gloria Maxwell, Metropolitan Community Coll.-Penn Valley Lib., Kansas City, MO (c) Copyright 2010. Library Journals LLC, a wholly owned subsidiary of Media Source, Inc. No redistribution permitted.

Slaughter brings her Grant County and Atlanta characters together for a second time (after Undone) in this superb thriller. When Dr. Sara Linton returns home to Grant County, Ga., for Thanksgiving, she hopes to steer clear of the police, especially Det. Lena Adams, whom she blames for the murder of her husband, police chief Jeffrey Tolliver. Yet when college student Allison Spooner is found dead in a lake and a local boy, Tommy Braham, is arrested for the murder, Sara reluctantly agrees to consult. The investigation soon spirals out of control after Tommy dies in custody. When Sara calls in Georgia Bureau of Investigation special agent Will Trent from Atlanta to take over the case, the local police greet Will's arrival with suspicion. Will must weigh Sara's personal vendetta against Detective Adams with the facts of the case, which grow more confusing the deeper he digs into the small county's secrets. Slaughter keeps the emotional tension high throughout. (July) (c) Copyright PWxyz, LLC. All rights reserved

It has been three and a half years since pediatrician and former Grant County, Georgia, coroner Sara Linton has been home. That's when she lost her husband, the town's much beloved police chief. Things have only gone downhill in that department since Jeffrey Tolliver died. Officer Lena Adams is getting sick of turning a blind eye to her new boss' alcoholism and the department's increasing willingness to stray from the rule book. When a mentally disabled murder suspect commits suicide in a jail cell, Sara, convinced that a mishandled interrogation led the boy to take his own life, calls in Special Agent Will Trent. She also sees it as a perfect way to get back at Lena, whom she blames for her husband's death. But what the investigation reveals is that the town's poorest and most hardworking citizens are also the ones most likely to be exploited. With its relentlessly grim depiction of the desperate circumstances of those trapped by deep-seated poverty, Slaughter's latest entry in her series overlays the standard police procedural with a burning sense of social justice.--Wilkinson, Joanne Copyright 2010 Booklist

A Georgia student's murder is solved all too quickly and violentlyin a way that tears apart her community, fuels the hatred between Det. Lena Adams and former Medical Examiner Sara Linton, and promises still further violence.If it hadn't been for the telltale cut on the back of her neck, Allison Spooner's death would have looked like suicide, complete with motive and farewell note. Shortly after Lena realizes that Allison's been murdered, a routine search of Allison's place leads to a sudden, bloody confrontation with a masked intruder that leaves all three officers involvedLena, Det. Brad Stephens and interim police chief Frank Wallacewounded. Miraculously, the intruder doesn't escape. Arrested none too gently, Tommy Braham confesses that he killed Allison because she spurned his advances. But his story, though it conveniently fits the facts of the crime, seems to require a killer who's both more intelligent and less weepy than him. When Sara, just returned to Heartsdale for a visit, arrives at the jail in response to a mysterious phone call, she finds Tommy dead. Furious at the incompetence of Lena, whom she still holds responsible for her husband's death (Beyond Reach, 2007), Sara phones the Georgia Bureau of Investigation, who send Special Agent Will Trent to determine the question of Tommy's innocence or guiltand incidentally to referee the latest round of the long feud between the two women.As usual in this white-hot series (Fractured, 2008, etc.), the ongoing psychological warfare and the physical violence that punctuates it are far more memorable than the unmasking of the real killer.]] Copyright Kirkus Reviews, used with permission.
More book reviews at iDreamBooks.com