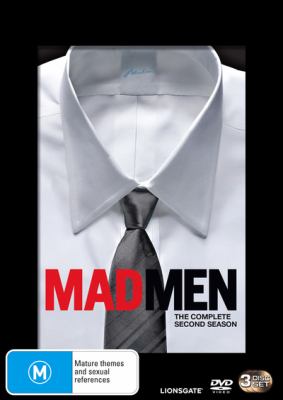 Originally screened on US television, July-October 2008.

Special features: audio commentaries by carious cast an crew on selected episodes ; 3 behind-the-scenes featurettes on the making of the show.

Episodes. For those who think young -- Flight 1 -- The benefactor --Three Sundays -- The new girl -- Maidenform --The gold violin -- A night to remember -- Six month leave -- The inheritance -- The jet set -- The mountain king -- Meditations in an emergency.

Returning for its second season, the Golden Globe winning series for Best TV Drama continues to blur the lines between truth and lies, perception and reality. Moving in a new direction, can Sterling Cooper keep up? Meanwhile, the private life of Don Draper becomes complicated in a new way. What is the cost of his secret identity?

In English (Dolby 5.1) with optional English captions for the hearing impaired.

Closed-captioned for the hearing impaired.