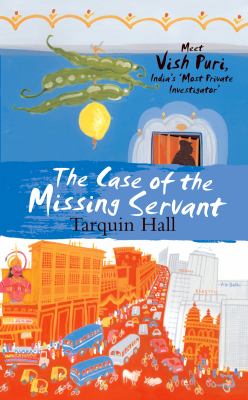 The case of the missing servant : from the files of Vish Puri, India's 'Most Private Investigator' / Tarquin Hall.

Genre/Form: Detective and mystery fiction. | Detective and mystery stories.DDC classification: HAL Summary: Meet an unforgettable new sleuth - Vish Puri, managing director of Most Private Investigators Ltd, Delhi. Cutting a determined swathe through contemporary Indias swindlers, cheats and murderers, Vish Puri has a moustache to rival Hercule Poirot's, and methods that resemble those of Sherlock Holmes.
Tags from this library: No tags from this library for this title. Log in to add tags.
Fiction notes: Click to open in new window

Meet an unforgettable new sleuth - Vish Puri, managing director of Most Private Investigators Ltd, Delhi. Cutting a determined swathe through contemporary Indias swindlers, cheats and murderers, Vish Puri has a moustache to rival Hercule Poirot's, and methods that resemble those of Sherlock Holmes.

Vish Puri's New Delhi detective agency has never been busier, often doing background checks on persons selected for arranged marriages. With his keen skills of observation and deduction, a network of personal contacts, and some modern communication devices, Punjabi Puri claims to be his country's top detective, citing his Super Sleuth award from the World Federation of Detectives for solving the Case of the Missing Polo Elephant in 1999. (He also has an appetite for pakoras and 30 excess pounds and is known to family and friends as Chubby.) A prominent lawyer who asks Puri to find a missing servant is arrested for the young woman's murder when her body is found, requiring complex work by Puri's staff. Meanwhile, he must check out the squeaky-clean fiance of the granddaughter of a revered war hero. And Puri's visiting Mummy-ji undertakes her own search when her son is shot at. In his fiction debut, British journalist Hall (To the Elephant Graveyard)-who lives in London and New Delhi-captures his second country with grace and humor and creates a protagonist able to put more cases in his "conclusively solved" cabinet. An entertaining start (complete with expletives-included glossary) to a promising series. [See Prepub Mystery, LJ 2/1/09; India is hot in the mystery world; in July, St. Martin's is publishing Six Suspects by Vikas Swarup, whose novel Q & A was made into the Academy Award-winning film Slumdog Millionaire.-Ed.]-Michele Leber, Arlington, VA (c) Copyright 2010. Library Journals LLC, a wholly owned subsidiary of Media Source, Inc. No redistribution permitted.

Vish Puri, the head of Delhi's Most Private Investigators Ltd., tackles a rather prosaic domestic case in this first of a projected series, the fiction debut of British author Hall (Salaam Brick Lane). Ajay Kasliwal, a lawyer who has brought cases against corrupt government officials, retains Puri to find a maid, Mary, who has gone missing from his household. Rumor has it that Kasliwal killed Mary because he got her pregnant, and when Mary turns up dead, the authorities arrest Puri's client. While the 51-year-old married detective, who could lose some weight and is affectionately called "Chubby," has a certain quirky charm, the resolution of the mystery of Mary's murder is less than satisfying. Hopefully, a future installment will go into what sounds like a more unusual matter, "the Case of the Missing Polo Elephant," for which Puri won the fictional "Super Sleuth" award in 1999. (June) (c) Copyright PWxyz, LLC. All rights reserved

*Starred Review* Author of To The Elephant Graveyard (2000), a compelling nonfiction account of the hunt for a man-killing elephant in India, Hall turns to fiction with the debut of what promises to be an outstanding series. Vish Puri, a somewhat overweight (and reluctantly dieting) middle-aged man, is owner and founder of Most Private Investigations (if you're thinking Mma Ramotswe, you're right on the mark). Puri heads a large cast of employees, friends, and family members, each of whom is realistically portrayed and thoroughly distinctive, from the slow-to-start Tubelight, through undercover woman Facecream, and on to Mummy-ji, Puri's obstinate but intelligent mother. Set in modern-day Delhi, the novel is dense with atmosphere, creating a delightful mix of the exotic and familiar through wildly idiomatic American English dialogue and nicely integrated references to food, customs, and clothing. Puri takes on the case of the missing servant after an old friend is accused of his servant's murder. At the same time, more routine matrimonial investigations continue, with Puri working for an old army officer determined to stop his granddaughter's marriage to a successful young businessman. (After Puri is shot at on his balcony, Mummy-ji takes over the investigation, using the Most Usual Suspects file.) An excellent, delightfully humorous mystery with an unforgettable cast of characters, The Case of the Missing Servant immediately joins the No. 1 Ladies' Detective Agency as representing the best in international cozies.--Moyer, Jessica Copyright 2009 Booklist

India's Most Private Investigator uses stealth, cunning and above all discretion to turn the tables on a killer. Although he holds his 1999 Super Sleuth award from the World Federation of Detectives almost as dear as the greasy pakoras and chicken frankies his wife Rumpi begs him to stop eating, Vish Puri would readily admit that the vast majority of his clients come to him for the mundane purpose of domestic spying. So when noted Jaipur attorney Ajay Kasliwal hires Most Private Investigations, Ltd. to locate the missing housemaid he's suspected of killing, Puri is ecstatic at the chance for some real detection. Slipping his agent, a Nepalese beauty called Facecream, into the Kasliwal mnage to mingle with the servants, Puri has his driver, Handbrake, take him on a tour of the Pink City to see where a simple country girl from Jharkand might hide. Meanwhile, back in Delhi, Puri's Mummy, strictly against his orders, stakes out an apartment block in Puri's own Gurgaon district in an attempt to discover who had the audacity to fire bullets at her beloved Chubby on the very roof of his house. Relying on the covert and sometimes byzantine network of corruption that rules Indian bureaucracy, the two press their separate quests to insure that justice triumphs in the end. What Cara Black does for Paris, Hall (Salaam Brick Lane: A Year in the New East End, 2005, etc.) achieves for India in this lively and quick-paced series debut. Copyright Kirkus Reviews, used with permission.
More book reviews at iDreamBooks.com