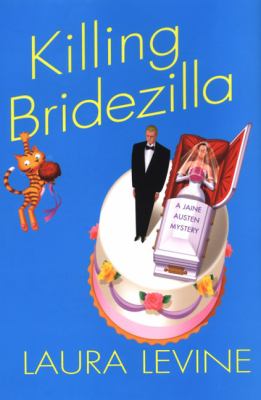 Genre/Form: Detective and mystery fiction.DDC classification: LEV Summary: Hired by her high school nemesis, Patti, to rewrite the ending of "Romeo and Juliet" for her wedding, Jaine Austen gets more than she had bargained for when Patti falls to her death from the balcony just before her big scene.
Tags from this library: No tags from this library for this title. Log in to add tags.
Fiction notes: Click to open in new window

Writer-for-hire Jaine Austen signs on to script vows for the ultimate Bridezilla, who wants her wedding to evoke Romeo and Juliet--without the downer ending. However, the bride's demise means a tale of woe for Jaine.

Hired by her high school nemesis, Patti, to rewrite the ending of "Romeo and Juliet" for her wedding, Jaine Austen gets more than she had bargained for when Patti falls to her death from the balcony just before her big scene.

Jaine Austen, indefatigable L.A. crime-solver and pen-for-hire, finds herself rewriting Shakespeare for a bitchy bride in Levine's rollicking seventh cozy (after 2007's Death by Pantyhose). Patti Marshall Devane, a former Hermosa High classmate, employs Jaine to write Patti's wedding ceremony based on Romeo and Juliet in lieu of traditional vows: "make it `snappy.' Like Friends with swords and long dresses." Jaine learns that Patti stole her groom, Hermosa alum Dickie Potter, from another grad, and Patti only allows her thin friends to participate in the wedding. Adding to the drama, Dickie's geeky best man still pines for Jaine. Dickie's drunken ex-wife disrupts the Bel Air ceremony, which climaxes with Patti's plunge off a balcony onto a stone cupid's arrow. Jaine suspects murder, though figuring out whodunit requires some fast thinking and fancy footwork. Levine's slick wit and sure pacing makes this another hit in this entertaining series. (June) (c) Copyright PWxyz, LLC. All rights reserved

The latest Jaine Austen mystery has the freelance writer and amateur detective working for her high-school nemesis, Patti Marshall Devane. Patti wants Jaine to write the vows for her wedding to Dickie Potter, a then-geeky, now-hunky former classmate, an upbeat rewrite of Romeo and Juliet. Patti hasn't changed much she's still beautiful, rich, and extremely mean. When this ultimate bridezilla plunges from a balcony on her wedding day, there are plenty of people who are happy to see her dead. Jaine takes the case on behalf of Dickie's ex-wife, the prime suspect and another former classmate, and finds herself entangled in high-school memories in pursuit of the murderer. Levine blends chick-lit and mystery in this funny and surprise-filled novel. Anyone who has ever had a high-school enemy will enjoy this tale of the ultimate just rewards.--Walker, Aleksandra Copyright 2008 Booklist

The $3,000 fee charged by freelance writer Jaine Austen (Shoes to Die For, 2005, etc.) doesn't begin to compensate for the psychic travail of working for a bitchy high-school classmate. Patti Marshall sat at the popular table in the Hermosa High cafeteria. Jaine, on the other hand, is best remembered for her swan dive into the principal's lap at the prom. But at the urging of her MasterCard bill, Jaine agrees to write the wedding vows for Patti's lollapalooza of a wedding to Dickie Potter, a former nerd who turned out kinda sexy. A dozen rewrites later, Patti returns to her original theme: a reworking of Shakespeare's balcony scene. Only someone has tampered with this balcony, and Patti tumbles lawnward, where she's impaled on a specially imported statue of Cupid. Suspicion naturally falls on Normalynne Potter, the wife Dickie kicked to the curb for Patti. But there are plenty of other possibilities: Cheryl Hogan, the bridesmaid Patti nixed as too fat; Dickie's protective mom Eleanor; even Veronica Hubbard, the caterer who endured Patti's complaints that the fish was too "fishy" and the lamb chops were too "lamby." And Jaine aims to confront them all, even as she's ducking the unwanted advances of Walter Barnhardt, a former Hermosa High nerd who turned out kinda nerdy. A better ratio of clues to red herrings would be nice, but Jaine's inner monologues are worth the price of admission to this sad, funny stroll down memory lane. Copyright ©Kirkus Reviews, used with permission.
More book reviews at iDreamBooks.com