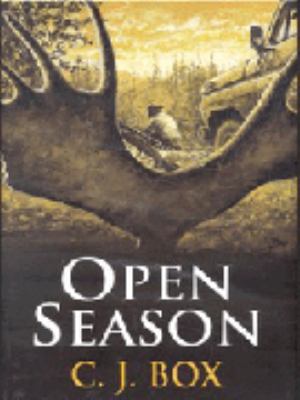 Joe Pickett, a Wyoming game warden who, with a shot of a rifle, is thrust into a race to save not only an endangered species, but also the life and the family he loves.

The publisher is really excited about this debut mystery, set in Wyoming and featuring game warden Joe Pickett. Events center on a desperate battle to save an endangered species, lifting this work above standard genre fare. Box is president and CEO of Rocky Mountain International Corporation, which manages tourism for several Western states. (c) Copyright 2010. Library Journals LLC, a wholly owned subsidiary of Media Source, Inc. No redistribution permitted.

Enthusiastic blurbs even from luminaries such as Tony Hillerman, Les Standiford and Loren Estleman can sometimes leave readers feeling as if they must have read a different book altogether. Not this time. Box's superb debut, the first in a series introducing Wyoming game warden Joe Pickett, should immediately make him a contender for best first novel or even best novel awards. Young Joe is struggling to fill the shoes of his mentor, legendary Vern Dunnegan, as warden of Twelve Sleep County, and trying to support his wife and growing family on the meager salary he makes. The hours are long, the work hard but satisfying, and Joe's honesty and integrity would pay off if he could avoid "bonehead moves" like ticketing the governor of the state for fishing without a license, for instance, or allowing a poacher to grab Joe's firearm from him. When that very same poacher turns up dead and bloodied in Joe's woodpile with only a cooler containing unidentified animal scat, his life, livelihood and family will never be the same. Upping the excitement are a couple of murders, local political and bureaucratic intrigue, a high-stakes pipeline scheme and an endangered species that Joe's eldest daughter "discovers." No one has done a better job of portraying the odd combination of hardy and foolhardy folk that make their homes in Wyoming's wilderness areas, or of describing the dichotomy between those who want to develop the area and those who want to preserve it. Without resorting to simplistic blacks and whites, Box fuses ecological themes, vibrant descriptions of Wyoming's wonders and peculiarities, and fully fleshed characters into a debut of riveting tensions. Meet Joe Pickett: he's going to be a mystery star. (July) (c) Copyright PWxyz, LLC. All rights reserved

Every few years a first novel appears that immediately sets itself apart from the crowd. As readers, we feel that special shock of recognition that announces, "Here is something special." Taking dead aim with his first sentence ("When a high-powered rifle hits living flesh it makes a distinctive--pow-WHOPsound that is unmistakable even at tremendous distance"), Wyoming first-novelist Box remains square on target throughout this superb debut. Joe Pickett, game warden of Twelve Sleep County in Wyoming, is just the kind of everyman hero we can't help but identify with: something of a plodder, even a bit of a bungler (he loses his gun to a poacher in the novel's opening scene), he is nevertheless the kind of man who responds to a crisis with courage and the ability to act decisively (just the way we like to think we would respond). And Joe faces a major-league crisis in his rookie year as game warden: when three elk hunters are killed under suspicious circumstances (one of them dies in the warden's backyard, apparently on his way to deliver something), Joe can't understand why his colleagues seem to want to sweep the case under the rug. When he looks under that rug, however, he finds a many-tentacled scam involving an oil pipeline and an endangered species. Soon Joe's career is in jeopardy and his family in mortal danger. The plot is constructed with airtight precision, generating remarkable suspense while drawing us completely into a vividly realized world. The Wyoming high country is a palpable presence here; its ruggedness plays a crucial role in the story, and its grandeur is continually set against the venality of most human concerns. The endangered-species theme, often a plot element is crime fiction, is explored with impressive complexity and no shortage of villains on all sides of the issue. And, best of all, the soft-spoken Joe Pickett is a Gary Cooper for our time: flawed, insecure, but a stand-up guy when it counts--the perfect mix of dream and reality. Open Season will please both mystery buffs and mainstream fiction readers; give it with confidence to anyone who likes either Nevada Barr or Ivan Doig. --Bill Ott

Rookie Twelve Sleep County Game Warden Joe Pickett's not much of a shot, and he's been looking like a goat ever since poacher Ote Keeley got the drop on him with his own gun during a routine arrest. But at least he's doing better than Ote, who's turned up dead on the woodpile outside Joe's house. Joe's search in Crazy Woman Creek canyon for the two outfitters and guides Ote was most recently partnered with ends happily, though violently, and suddenly Joe is the man of the hour. Longtime County Sheriff Bud Barnum nervously asks Joe's assurance that he's not going to support neighboring game warden Wacey Hedeman's challenge in the upcoming election; trophy wife Aimee Kensinger, who really likes men in uniforms, invites Joe's family to housesit her palatial digs for three weeks; and wily Vern Dunnegan, Joe's predecessor, wants Joe to join him in pulling down big bucks from InterWest resources, the fat-cat corporation for whose gas pipeline Vern's lining up local support. All this good news is only a front, of course, for a monstrous assault on Joe's livelihood, his integrity, and his family-and incidentally on an inoffensive species long assumed extinct. In response, Joe promises one of the bad guys that "things are going to get real western," and that's exactly what happens in the satisfyingly action-filled climax. A high-country Presumed Innocent that moves like greased lightning. First of a welcome new series, though it's hard to imagine tourism-marketing exec Box topping his debut.
More book reviews at iDreamBooks.com